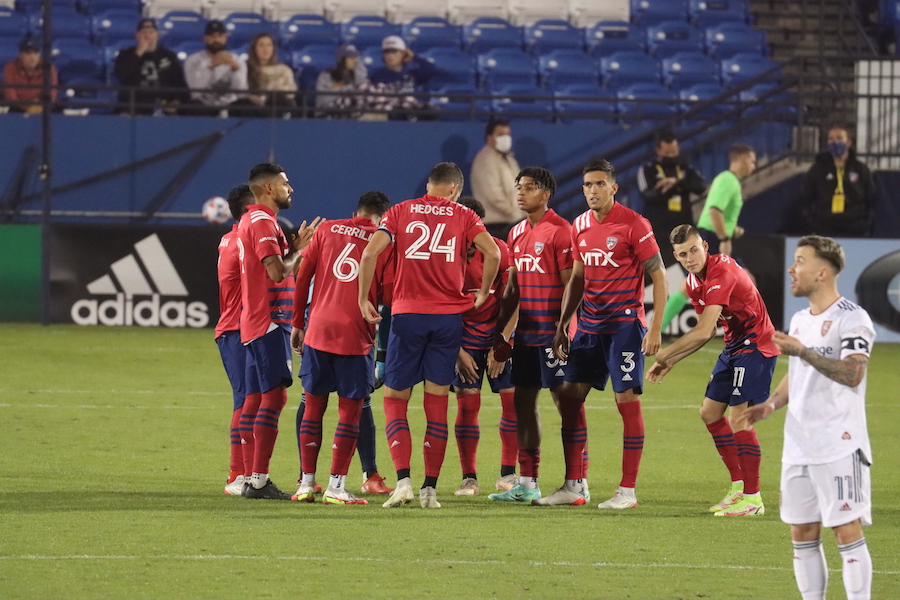 FRISCO, Tx – FC Dallas picked a total of six players in the 2022 MLS SuperDraft to increase the squad depth for this upcoming 2022 season set to begin January 17, when the team will start their preseason.

In the first round, Dallas picked Isaiah Parker at no. 3, Lucas Barlett, and at No. 28, Tsiki Ntsabeleng.  In the third round, FCD picked Alec Smir at no. 62 and Chase Niece at no. 66. FC Dallas picked Holland Rula in the Fourth Round of the 2022 MLS SuperDraft.

“I’m happy with the picks that we got and the players that we have for this year,” FC Dallas Head Coach Nico Estévez said Tuesday. “They have quality, they’re on their way to developing with us and make an impact during the year.”

FC Dallas picked Saint Louis University and Generation Adidas player Isaiah Parker with the third overall pick. Parker is a player that can play as a winger and also as a wingback. Parker played in 21 games, scoring three goals and tallying seven assists. He is a player that can add depth in the wings for Nico Estévez, giving more of an attacking option alongside Szabolcs Schön, Jáder Obrian, Kalil ElMedkhar, and even Paxton Pomykal.

The move was possible as they traded Toronto FC’s natural first-round pick (third overall) in the 2022 MLS SuperDraft and rights to forward Dom Dwyer in exchange for $50,000 in General Allocation Money (GAM) on Monday, January 10.

Lucas Bartlett was the team’s pick at number six in the first round. Bartlett is a center-back that can help increase the depth in the backline for FCD. Bartlett started 20 games in 2021 and added five goals and three assists, and was a First Team All-BIG EAST selection. Barlett can play alongside Matt Hedges, Nkosi Tafari, José Martinez, and Justin Che.

“We needed a center back to increase our depth,” said Estévez. “He can come out playing with the ball with both feet interestingly.”

Congrats to Lucas Bartlett on being selected 6th overall by @FCDallas! pic.twitter.com/zfK4piIz5f

FC Dallas traded the No. 34 overall pick and $50,000 GAM to NYCFC for the No. 28 overall pick. FC Dallas picked at Oregon State University winger Tsiki Ntsabeleng, another winger that can add depth in attack for Nico Estévez. Ntsabeleng had five goals, eight assists in 18 matches played in 2021.

“We wanted to make sure we could get Tsiki,” said André Zanotta. “He’s a player that we feel has amazing talent. We were impressed by him. A lot of people will be surprised by his quality.”

Congratulations to Tsiki Ntsabeleng on being selected as the 28th pick in the first round of the @mls SuperDraft by FC Dallas! pic.twitter.com/AGaQR0hrzD

FC Dallas picked at No. 62, University of North Carolina goalkeeper Alec Smir, and at No. 66, Saint Louis University defender Chase Niece in the Third Round of the 2022 MLS SuperDraft.

Smir played in 20 matches, allowing 21 goals in the 2021 season. Smir can add value to the squad following the departures of Kyle Zobeck and Philipe Megiolaro.

“He’s a goalkeeper that can help us during the year,” said Estévez. “He’s got good qualities that can fit a different profile and qualities for the position that we’re looking for.”

Welcome to the club, @alec_smir!

With the 62nd pick in the 2022 MLS #SuperDraft, we select GK Alec Smir out of @UNCmenssoccer. pic.twitter.com/oiNLDb7WLt

Niece played in 19 matches, including 18 starts, and scored twice in the 2021 season. Another defender that help in squad depth and give a pair of fresh legs during the season.

“He was a good defender for Saint Louis,” said Estévez. “He’s calm with the ball and he’s very smart tactically, he can cover and very smart and intelligent in his movements.”

FC Dallas’ final pick was at No. 87, Wake Forest University Holland Rula in the Fourth Round of the 2022 MLS SuperDraft. Rula played a total of eight matches in 2021 where he did not score any goals, but assisted three of them.

“He’s a former player in the academy,” said Estévez. “He’s related with our program and has good qualities as a full back and can help us in that position.”

We've got another #SuperDraft selection coming your way!

Estévez also spoke about how these players will need to come to adapt to the speed of MLS and how their qualities can help the team.

“It’s important for them to adapt to the speed of play—it’s different than in college,” said Estévez. “It’s a period of adaptation, once adapted we will be defining what they can offer during preseason. We need fresh illusions to make the final squad. We believe that each have different qualities that can offer different variations of what the team needs to be enriched.”

Preseason is closer than ever and these newly drafter players will have their opportunity to showcase their talents and their ability to adapt. As a result of their qualities they can impress Estévez in the long run and become references in the squad.