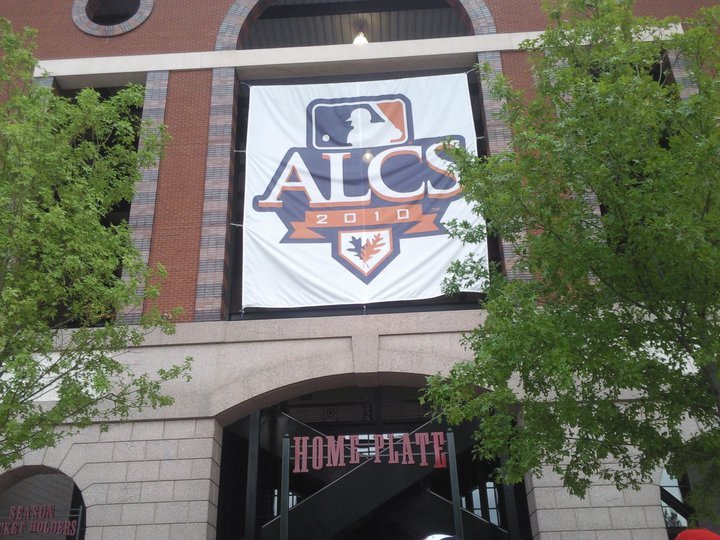 The day is Friday, October 22nd, 2010, one of the most exciting nights in Texas Rangers history. One of my good friends, Nathan, contacted me the Thursday before (Thursday was an off day for travel) asking me if I wanted to come with him to the ballpark for Game 6. I was stunned because I didn’t think I would participate in history as a fan. I said “yes” about as fast as it takes me to put on my flip flops (I don’t remember my footwear that night).

The day came (similar to how Rebecca Black and her friends felt about Friday). I finished my last class of the day at 11 am and patiently waited for Nathan to pick me up from UNT. We left in the early afternoon and grabbed a bite at the On The Border near the ballpark. There were numerous Rangers’ fans scattered throughout, and a few Yankees’ fans. I noticed one thing; I didn’t have a Rangers shirt. I’m serious, no Texas Rangers shirt at all.

We got to the ballpark and parked. It was the first Postseason experience I had in my lifetime. I looked at all of the ALCS flags staggering throughout Rangers Ballpark in Arlington (the name at the time). To fix the shirt issue, I went and bought an AL West champion t-shirt, which still stands today. Plus, we received little red pom-poms to wave throughout the game. Nathan and I walked around the ballpark and head to right field, where players warmed up. Team photography took a picture of us with Nathan doing the claw and tipping my cap (don’t ask because I don’t know). I spotted Neftali Feliz, Alexei Ogando, Matt Harrison, and Yankees’ Joba Chamberlin chatted with fans slightly. 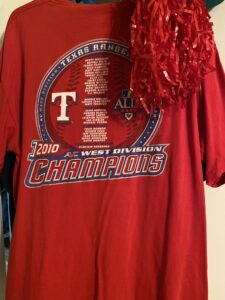 The shirt and pom-pom received that day 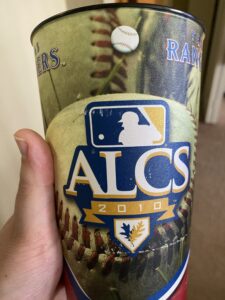 The atmosphere of the park was like no other. I could tell based on Ranger fans’ faces that they felt tonight was the night. Nathan and I arrived at our seats on the top deck. The seats were far (about 17 rows back on the third-base side), but that didn’t matter at all. In my life, I never saw the ballpark this packed in person. Rangers’ red was everywhere, and everyone embraced it. Sure there were Yankees fans scattered, but to witness a vast majority of the crowd in Ranger red was chilling. From what I recall, there was fear of a rain delay. I think rain did slightly fall before the game started, but the Rangers grounds crew did their thing and even got a standing ovation from the crowd. A loud, “Let’s Go Grounds Crew,” surfaced, the first pitch was on-time, and away we went. 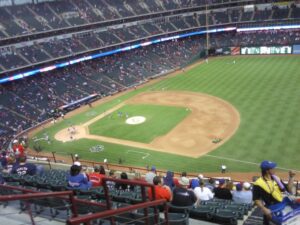 Seats before the game

I remember the one moment (outside the ninth, of course) was Nelson Cruz’s two-run homer to break the game open in the fifth. The crowd went berserk, and Nathan and I looked at each other, thinking tonight WAS the night. Sure, Texas blew a 5-0 lead in Game 1, but Colby Lewis was on another level even with the wild pitch that scored the Yankees’ only run. In the eighth inning, I thought to myself with the lineup construction, Alex Rodriguez could be the last batter for the Yankees, mostly after Brett Gardner walked in the eighth. The ninth inning came, and sure enough, Neftali Feliz sizzled fastball after fastball. Alex Rodriguez went to the plate with two outs, and on strike three, I roared more than I ever had before. I don’t even know if the screeching individual was 19 year old me.

Once the Rangers recorded the final out, we started high fiving and hugging anyone in sight. We stayed for the trophy presentation led by TBS’ Matt Winer, and the words Michael Young spoke electrified the crowd. After about an hour, Nathan and I started to leave, and chants of “Let’s Go Rangers” roaring through the park. We continued to high five ANY fan insight. It was a night I’ll never forget and one that always stands tall in Rangers’ history. Ten years later, the new park across the way will witness a World Series title, just not from the Rangers. 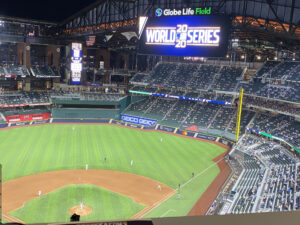