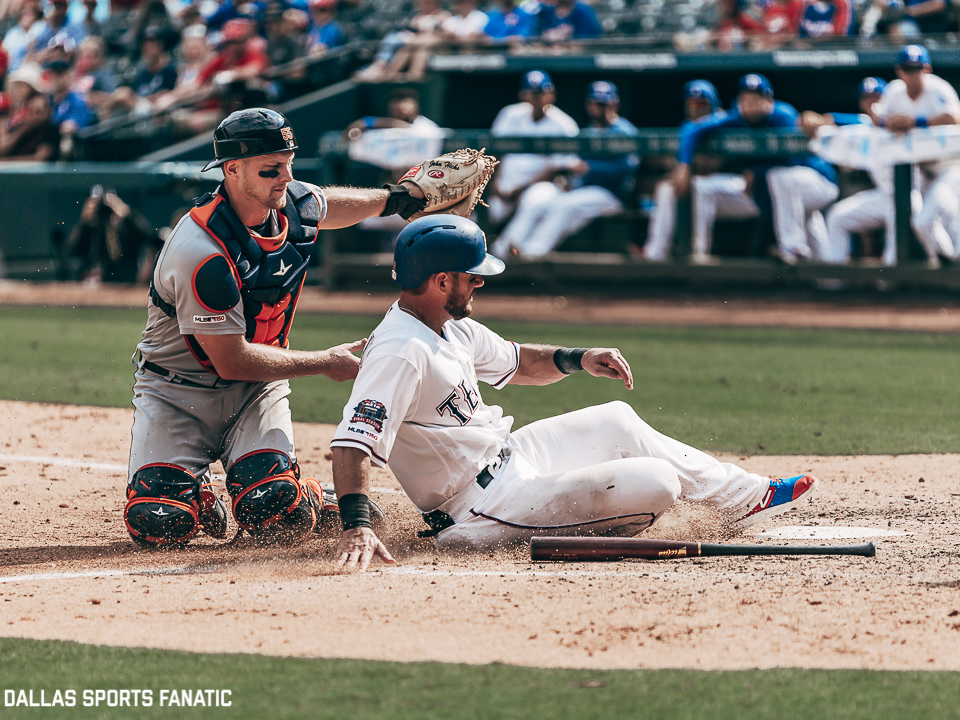 2019 Texas Rangers After-Season Roundtable: What did we think about 2019?

2019 Texas Rangers After-Season Roundtable: What did we think about 2019?

After wrapping up another season of Texas Rangers baseball on Sunday, it’s time to look back on the 2019 campaign. This week, we’ll share our thoughts on various Ranger questions as we digest all that came of the season and how it can impact the team’s future.

What was your main takeaway from the 2019 season?
Corey: I have to say, I was impressed with the 2019 Texas Rangers. I think first year manager Chris Woodward did an outstanding job getting his players to buy into his message. Obviously, there is still work to do to make this team a contender again but this year showed that the Rangers have a manager that guys believe in and feel comfortable with.

Alex: I think we all witnessed the “never give up” attitude that the franchise has been trying to build for the last five years. You’d hear it in interviews, players and coaches would talk about it, and there would be T-Shirts, but this season we’re witnessing the motto on the field. The most common word Chris Woodward used this season is “resilient.” That’s not because that’s his word of the year to use it every day, it’s a proven description of the Texas Rangers this season.

Ronald Guzman admitted to me that there is a difference between the 2019 Rangers and the 2018 ballclub to finish the year. “It’s a different feeling; we don’t take it as this year is over. We take it as this is the beginning of something great.” Guzzy added, “It’s not over, we’re just going to go home and rest for a little bit and come back next year and continue what we’ve learned throughout the whole year and keep learning, and we’re going to do really good things in the future.” It’s a notion that both players and coaches installed into their mind.

Darien: My main takeaway from the 2019 season was that Chris Woodward is the real deal and for many reasons. Allow me to break them down real quick for you. First and foremost the clubhouse is knitted and unified around his goals and visions for this young team moving forward. Each player is locked-in physically and mentally ready to take on any challenges they face within this competitive system. The overall feel of it reminds me of the team back when Ron Washington was manager – so maybe we’ll see the “claw” and “antlers” make their glorious and inevitable return next year on their way to the postseason.

Woodward and his decisions alongside General Manager, Jon Daniels, are completely in sync from the outside looking in. Daniels has begun this transformation of the farm system and Woodward has backed-it since the day he walked in the door. The way Woodward has utilized his numerous call-ups this season has been brilliant and nearly a dozen of those prospects give this team solid hope moving forward into the new ballpark. I think about guys like Nick Solak and Scott Heineman who have been in Arlington for over a month now and you can’t forget pitchers Kolby Allard, Brock Burke, Joe Palumbo and the electric Emmanuel Clase. There’s hope and a future more than ever within the pitching staff. Without Woodward, who knows if any of these guys could’ve had the chance to play at the 25-year-old Globe Life Park.

Did they meet or even surpass your expectations?
Corey: Coming into the season I was not expecting the Rangers to make the playoffs. I thought that their ceiling was hovering around .500 but to me it was a successful season. One quote from after the final game stuck out to me, it was from Elvis Andrus. He said that the Rangers are going to “bring it” next season and that the other teams in the division better be ready for them. That has been Woodwards message this last week of the season.

Alex: I’d say overall; the team surpassed my expectations. I did think we’d see this type of ballclub but possibly a year or two later (2020 or 2021) rather than 2019. There is a small piece of a disappointment considering the club in late June did tie Tampa Bay for the top spot in the Wild Card and battled at the All-Star break. However, if we’re evaluating the season as a whole, there’s been a lot more positive than negative. A team can attempt to recuperate after their main guys are hurt, but if those players are too valuable (i.e., Joey Gallo and Hunter Pence) than it becomes challenging to recover. “I’m proud of our team. We continue to fight.” Joey Gallo told me on Saturday. “We have a lot of positive things going forward.”

Darien: At the start of the season, I predicted a 74-88 record, so they definitely surpassed my expectations prior to the season. When I made that prediction I didn’t think there would be as much hope that there is now. The pitching turned out much better than I ever thought it would with Minor (14 Wins, 3.59 ERA) and Lynn (16 Wins, 3.67 ERA) leading the charge. Beyond the pitching performance, the bats also surpassed my expectations. Outside of Gallo, Choo and Andrus, I didn’t know what the team was capable of on offense, and by the All-Star break, they were all of a sudden a top-five scoring offense in the MLB. Who knew Hunter Pence, Danny Santana and Willie Calhoun would literally burst onto the scene as soon as they were given the opportunity. Also, if Joey Gallo would’ve been active the entire season, who knows, the Rangers could have been contending for a final playoff spot.

With the Texas Rangers final record at 78-84, that doesn’t display how good of a season they had, it only shows the light of the situation: this is a young club and there will be growing pains in the process. Just ask Joel Embiid from the Philadelphia 76ers about that. Across the MLB, this team was a surprising near-.500 ballclub and even though the second half of the season was rather underwhelming, the team still fought and refused to begin “tanking” like a few other AL teams.

Stay tuned to DSF’s Rangers coverage as we’ll continue to break down our thoughts on the 2019 season and how it impacts 2020 all throughout the month of October.