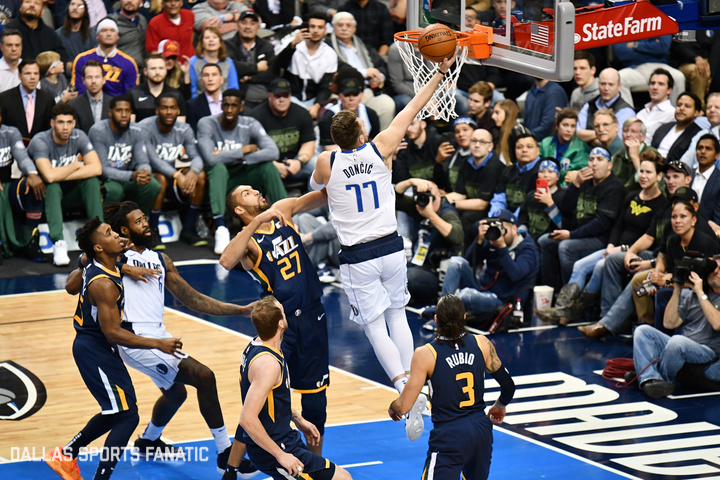 Mavs get a much needed first quarter victory

It’s no secret the Mavericks have struggled mightily in first quarters this season. And they can largely place that blame upon the first unit.

Luka and Dennis haven’t developed any sort of real chemistry, guys aren’t making shots, and some guys aren’t giving maximum effort at all times. For example, the starters were a combined minus-58 Wednesday in Chicago.  By comparison, the primary bench guys totaled a plus+83. That’s enough to beat a team like the Bulls, but the playoff teams in the West? Not so much.

Coach Carlisle has mixed up his substitution patterns to try and alleviate some of the problems. He’s bringing JJ in at the midway point of the first, and Dorian often finds himself in the game early as well. It’s having moderate success and it did in this contest, as the Mavs won the first quarter tonight 30-24, momentum that they would ride to a dominant, 50, yes 50-point victory.

“Well, Ask any analytics guys. Getting off to a good start is the biggest key to winning in the NBA,” Coach Carlisle said.

“The thing that was good was that the tone was set defensively, and we were able to sustain.”

Sometimes, you just have “one of those nights,” and that was definitely the case for Donovan Mitchell tonight. His jumper can be inconsistent at times, but one thing you can always count on with him, is that he is going to be in attack mode, but that just wasn’t the case tonight.

“I can’t remember a better defensive performance by any Mavericks team in 11 years. I am just really impressed with the way these guys brought it,” Coach Carlisle said.

Last year’s Rookie of the Year runner-up finished with a quiet 10 points on 3-9 shooting. The Jazz as a team would only shoot 31% and a dreadful 17% from beyond the the line. They would only score 22 points (!!!) in the second half, totaling only 68 for the game. Easily the Mavs best showing of the season.

On the surface, he didn’t have the best line. He finished with 13 points, six boards, and two assists on just 5/13 shooting. Certainly not the sexy line we have become used to him putting up.

But, two plays in particular stand out a that really got the entire team going.

First, there was the three he splashed right in Joe Ingles face to end the half.

According to Brad Townsend of The Dallas Morning News, the savvy Aussie was talking a little junk to the prized Mavs rookie, and there was a noticeable uptick in his energy level just after that point.

Ingles is trash-talking Luka, shouted at him after making that 3.

He would make Joe Ingles eat those words in spectacular fashion late in he first half, with a beautiful, high-arching, buzzer-beating step back three right in the Australian’s face. An exclamation point on what was terrific first half for the Mavs and a signiture moment early in his career.

The second just so happened to consist of Luka absolutely embarrassing the reigning defensive player of the year in Rudy Gobert.

We have seen some of his tricks before, but he really needed to pull a rabbit out of his hat after he found himself trapped under the goal with Gobert towering over him.

And here's a better angle… pic.twitter.com/rJd2DWyIBT

And as only he would, he faked a pass behind Gobert’s back, completely spinning the he big man in a circle as he casually layed the ball in, much to the delight of the American Airlines Center crowd.

The Mavs will have two days to plan for the two-time defending champs as the Warriors come to town on Saturday night.