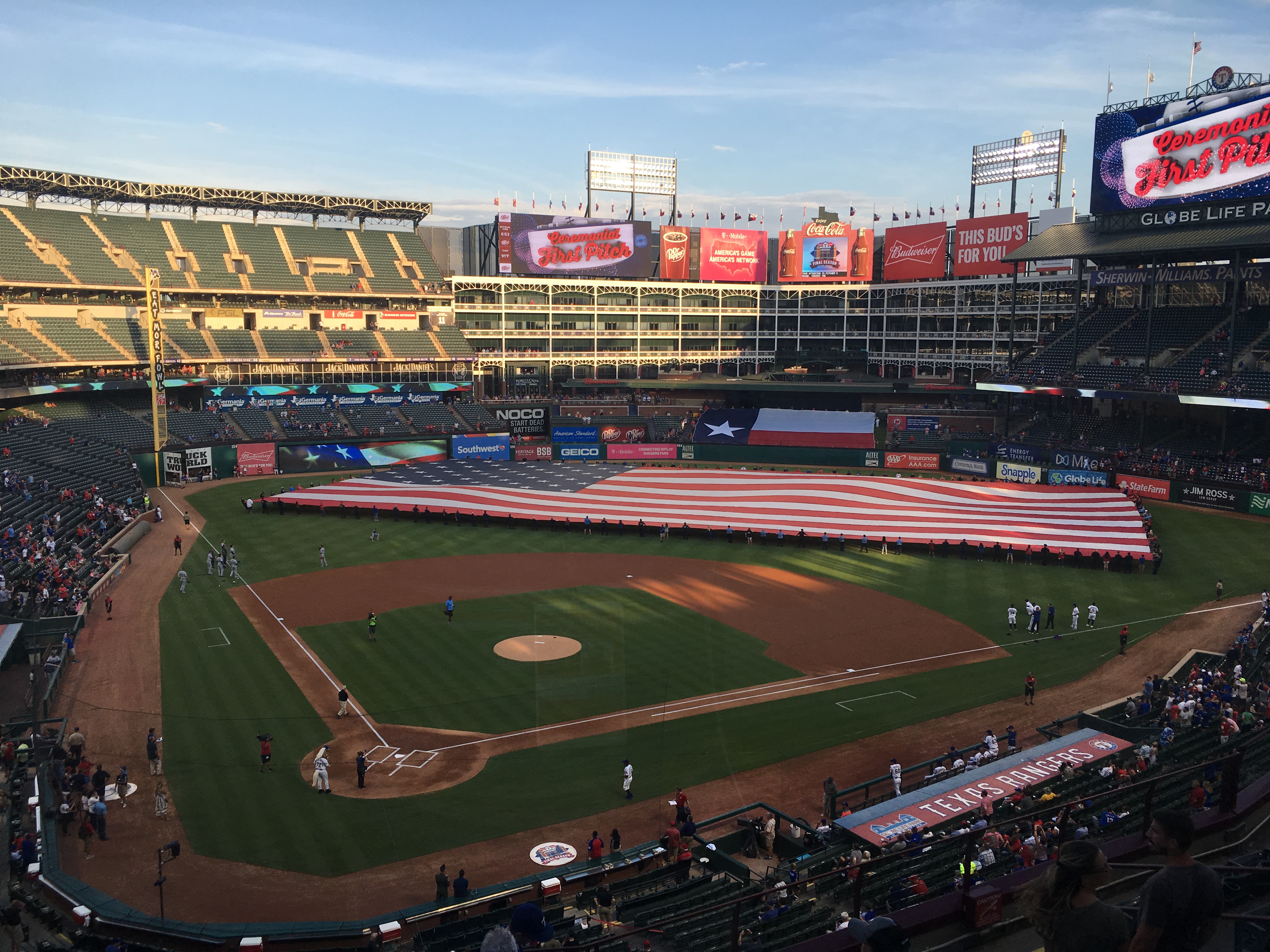 If you’re an avid baseball fan you know there’s the old saying, “you see something new every time you go to the park.” On Wednesday, the Rangers and Rays accomplished something for the first in ANY Major League regular season game in 2019, accumulate fourteen runs in the first inning and a half. On a night that featured 385 pitches and fifteen pitchers combined by both teams, the Rangers stole a coveted game from the playoff-contending Tampa Bay Rays.

First off, it was a beautiful pregame anthem before the game. Arlington Policeman and Women and Fireman and Firewomen held an enlarged American Flag in center field while on Green’s hill, folks laid the Texas flag. Everyone had heavy hearts remember what happened on September 11th, 2001. The ballpark held a brief moment of silence with a stealth bomber flying over the ballpark and a lovely saxophone rendition of the National Anthem.

After the pregame ceremony, the insanity began. A first inning that lasted fifty-five minutes had four pitchers used, eighty-six pitches, and a total of nine runs scored. The Rays scored their first run in a span of four pitches and took a 2-0 lead to start the night. However, Texas’ patience scratched a seven-spot in the opening inning, something they hadn’t done at Globe Life Park since 2006. RBIs in the first inning came from Calhoun, Mazara, Santana (who had two), Trevino, and Andrus.

The good feelings surrounding the Rangers seven-spot in the first inning were short-lived as Tampa Bay immediately answered to tie the game with a five-spot, including a Ji-Man Choi three-run home run off Yohander Mendez. Mendez retired four Rays, two of which were pickoffs on the base paths. The Rays got thrown out four times total on the bases, including rookie Johnny Davis who ran for Matt Duffy in the seventh and making his Major League debut. The Rangers caught Duffy in a rundown at third, picked off Choi at second, Guillermo Heredia at first, and Davis at first base.

Make that FOUR times a Rays player has been thrown out on the base paths tonight. #Rangers pic.twitter.com/yoIi3nEBeR

The offense halted until the fourth inning when Duffy lifted a sacrifice fly to center field and broke a 7-7 tie, and after that both offenses cooled off until Rougned Odor blasted his twenty-fifth home run of the season on a laser to right field in the seventh. Rougie’s September continues to heat up. This month, Odor is hitting .333 with four home runs and ten driven in. The at-bat became possible thanks to a two-out single by Nick Solak and a two-out eleven pitch walk by Danny Santana. Before the seventh inning, the Rangers mustered up just three hits and no walks after the seven run first inning. The Rays made things interesting in the ninth inning with another Ji-Man Choi home run to center and stranding the tying run on base, for the second straight inning. Odor talked after the game about another resilient effort by the Rangers offense, “We don’t give up. We keep swinging and keep having good at-bats and I think that’s what happened when you keep getting good at-bats.“

The trouble Wednesday came on the mound. Chris Woodward stated before the game that he felt the Rays would be a good matchup for Ariel Jurado and that’s why Texas did not use an opener. However, the Rays roughed Jurado for six runs in an inning and two-thirds. Ariel allowed six hits and walked two Rays while throwing forty-seven pitches. The Rangers bullpen came in for the rescue despite surrendering two runs in seven and a third innings pitched. Texas went through Mendez, Kelley, Martin, Gibaut, Volquez, and finishing the night out with LeClerc for the save. Ian Gibaut picked up his first Major League win on Wednesday with scoreless innings pitched (against his former team). Chris Woodard talked after the game about the fight in the bullpen Wednesday. “Guys kept coming and ready to pitch. [The Rays] are fighting for their lives over there, you can tell by the way they play and our guys matched it and came out on top.”

Texas and Tampa Bay conclude a three-game series, and the season series, on Thursday. The Rays send Brendan McKay on the mound, who the Rangers saw on June 29th, while the Rangers counter with Kolby Allard. First pitch scheduled for 7:05 PM.

Before Wednesday’s game, the media asked Joey Gallo about his status. Gallo said he feels good and the plan is to fly out to Arizona this weekend to rehab. Joey responded if the Houston series is possible to join the club, “I don’t think it’ll be that quick, but it could be [at] Oakland. I’m going to hit [Thursday], [and] I’m trying to hit as much as I can.” Gallo’s last game before the injury was July 23rd.