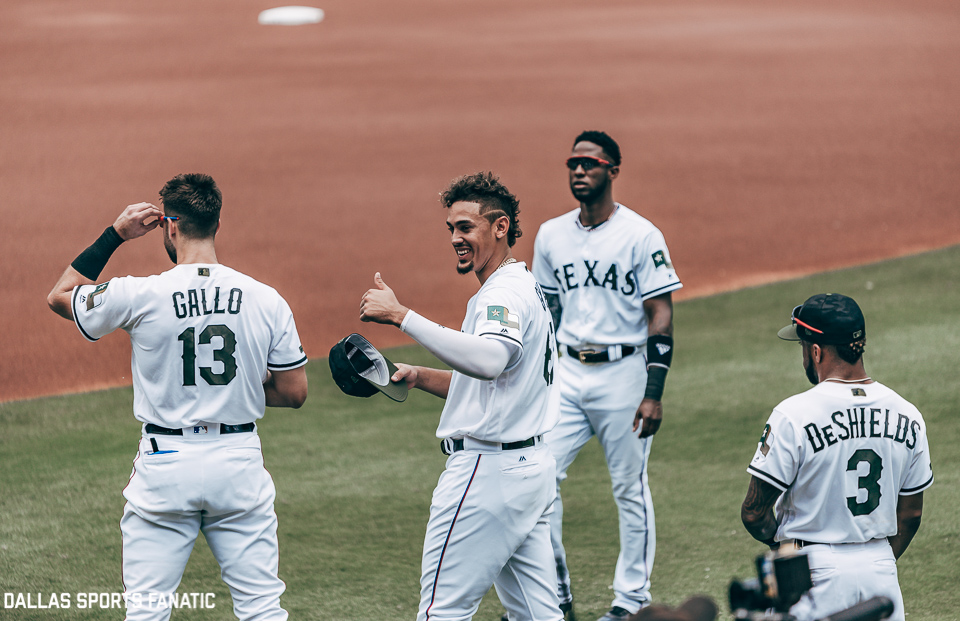 A breakdown of the Rangers first basemen of the 2010’s

A breakdown of the Rangers first basemen of the 2010’s

Poking your way around Baseball Reference is certainly a fun way to waste half an hour every once in a while. For baseball fans, sometimes we get caught up poking around the site whether we should be delegating our time in that way or not. Well, we all have slightly more time on our hands these days, so why not cruise around Baseball Reference until I’ve noted each and every player that has manned first base for the Rangers ever since 2010?

I’ve done this before for Rangers catchers and left fielders, but I did those since 2003 and 2001. For our first base exercise, I’m going back to 2010. One nice and clean decade of Rangers baseball to look back through. The leader in games played is exactly who you’d expect, but there are plenty of interesting names that pop up and certainly plenty you haven’t thought of in a while or totally don’t remember at all.

Jonathan Lucroy (2016-2017) 1 game
Apparently Lucroy played at first base from the seventh inning on in a game on July 5th, 2017 when the Rangers beat the Red Sox 8-2. Going through the play-by-play, it looks like maybe Rougned Odor had to leave the game due to injury. Robinson Chirinos came in for Lucroy. He moved over to first base. The incumbent first baseman Pete Kozma moved over to second. Who knew?

Robinson Chirinos (2013-2018) 4 games
No recollection of this, but it doesn’t surprise me since Chirinos came up in the minors as an infielder. These appearances at first were all back in his first season with Texas in 2013. 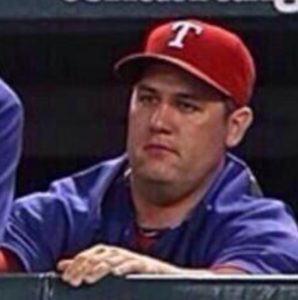 His stint in Arlington was insanely forgettable and a major waste of time, but at least we’ll always have this photo.

Mike Olt (2012) 8 games
The Messiah in the eyes of many Ranger fans, the highly touted prospect appeared in just 16 games for Texas in 2012 before being the main piece the Rangers sent to the Cubs in the unfortunate Matt Garza trade. Olt hasn’t appeared in a major league game since the 2015 season.

Carlos Pena (2014) 16 games
No recollection of this once prominent slugger playing for Texas this late in his career. Of course, Texas drafted him in the first round of the 1998 draft. Pena’s 18 games with the Rangers in 2014 were the last games he played in Major League Baseball.

Jeff Baker (2013) 21 games
Even if it means you don’t come back to read the rest of my article, I’d be okay if you went here to check out an awesome piece of investigative journalism done by The Athletic’s Levi Weaver about Baker’s strange thumb injury back in 2013.

J.P. Arecibia (2014) 22 games
No shame in admitting this guy was a handsome dude. Didn’t help him on the field too much.

Jorge Cantu (2010) 23 games
If the few months he were on the team weren’t a magical summer leading to the team’s first playoff appearance in 11 years, he’d be about as forgettable as anyone on this list.

Jurickson Profar (2016-2018) 43 games
At least we were mostly safe from throwing errors when he was playing at first. Sorry, Jurickson.

Adam Rosales is calling it a career. Let's pay tribute to the man with one of the fastest home run trots we've ever seen.

Chris Davis (2010-2011) 56 games
Oh, how the mighty have fallen. Hopefully Davis can figure out a way to turn his career around with a big contract that runs through 2022.

Prince Fielder (2014-2016) 66 games
Really one of the more sad days in recent Rangers memory was seeing the mighty Prince Fielder in a neck brace forced to tearfully announce his retirement at age 32 on a random August day in 2016.

Justin Smoak (2010) 69 games
It’s been good to see Smoak turn things around in recent years, including an All-Star nod in 2017. His few months in Arlington back in 2010 were big in raising his stock to make him the main piece sent to the Mariners in the Cliff Lee trade.

Ryan Rua (2014-2018) 74 games
Ryan Rua is a good dude who played all over the place for the Rangers throughout his five seasons here. Unfortunately, he never made enough of an impression at any position to stick a starting position.

Joey Gallo (2015-present) 95 games
With his move to the outfield over the past two seasons, Gallo hasn’t played a game at first base since 2018.

Michael Young (2000-2012) 177 games at first from 2010-2012
Young is of course a franchise legend with his number 10 retired, but I was kind of surprised his number of games at first wasn’t a bit higher. He only played first base during the 2011 and 2012 seasons and he was busy going all over the diamond both of those seasons with appearances at second and third base, shortstop, and at designated hitter.

Ronald Guzman (2018-present) 198 games
With just a season and a half worth of games under his belt for Texas, somehow Guzman already makes his way to playing the second most games at first base for the Rangers over the last ten years. Similar to the number one guy, his signature is his defensive abilities. The Guzman split is pretty much another member of the team since it shows up so often.

Mitch Moreland (2010-2016) 661 games, 2016 Gold Glove
Obviously Mitch was going to be the leader in games played at this position the last decade, but I always felt like the Rangers were trying to upgrade from him all throughout his tenure in Texas. Moreland was pretty reliable to be what he always was: an above average defensive first baseman with an average bat for someone playing that position everyday.

The Mississippi native always seemed to have a Southern charm and big time smile. He was a key contributor to both World Series teams at the beginning of the decade and both of the division winners several years later. While he’s not likely to be worthy of a Rangers Hall of Fame induction or anything, he’ll always be known as the guy to hit the first Rangers home run at Globe Life Park in Arlington back when Texas hosted the San Francisco Giants in game three of the 2010 Fall Classic.

While there are certainly some pretty “Joe Schmo” guys on this list, there really seems to be more prominent names who had respectable careers/tenures in Texas. First base can often be a position guys get forced to pick up on the fly in order to keep their bat in the lineup, so it makes sense that some of the names racked up as many games as they did.

While we’re likely months away from our next taste of Rangers baseball, it’s always fun to look back at some of the names of the past.