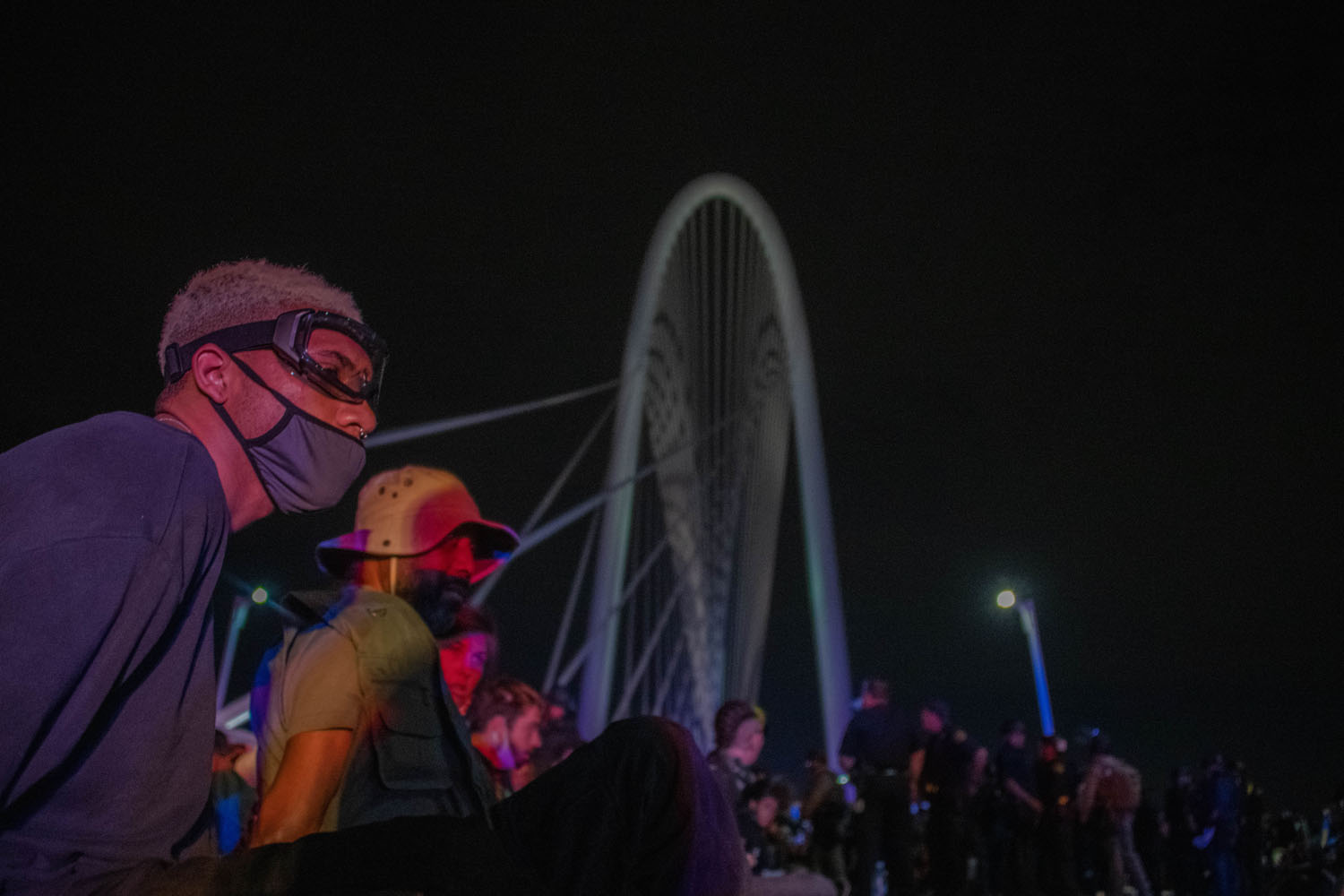 Tensions between police and protesters were high after a weekend in which nonviolent protesters were tear gassed, shot with rubber bullets, assaulted and arrested all across the nation.  It even happened on our home turf here in Dallas starting Friday night and carrying through Saturday afternoon – ultimately resulting in a 7 pm curfew for the Downtown Dallas area.

On Sunday, things escalated as protesters tested the limits of the curfew – resulting in 125 people being taken into custody.  The scene played out like a round of Call of Duty when police dressed in riot gear opening on parts of the crowd, hitting one protestor in the eye.  He would ultimately lose it entirely.

On Monday, I arrived at the Dallas PD headquarters an hour before the protest. There was a crowd of around 120 protesters chanting the popular chants we’ve come to know in the fallout of the murder of George Floyd. 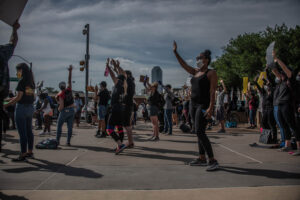 As the protest neared, the crow grew larger.  The scheduled start time was approaching and there was a murmur through the crowd: the protest had been moved to the Crowley Courthouse, a location outside of the designated curfew zone.  Later, we would find out that the group’s organizer, Dominque Alexander of the Next Generation Action Network, had made a deal with County Judge Clay Jenkins that the protest would be safe at the courthouse until 10:00pm that evening.

The crowd began their walk to the new location.  Fearing my car would be caught inside the curfew zone, I decided to drive.  Street corners all over the city were blocked by police officers and their cruisers, and a trip that usually takes five minutes took me nearly twenty.

I parked my car at a nearby bail bonds shop, grabbed my camera and began walking towards the courthouse.  With the impending curfew 30 minutes away, I could feel the tension in the air.  When I reached the intersection nearest the courthouse, I was met with multiple heavily-armed members of the state police blocking the route towards I-35.  As swarms of protesters made their way to the large group assembling across the street, I decided to ask one of them a question.  It was 6:45pm.

Without hesitation, the officer replied: “We’re going to start arresting everyone.” 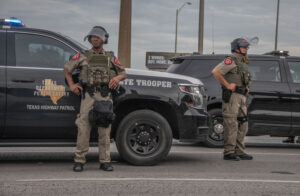 Judging by the level of military grade weaponry and surplus of zip ties each officer had on them, I believed him.

I decided it most practical to go back to the car and await 7pm.  “If they really decide to swarm like an attacking army, it’s probably best to be part of the wave rather than taken by surprise,” I thought to myself. So, I stood by my car and waited.

7pm hit.  State troopers, Dallas PD and other agencies remained in place. Still, the tension remained – as if the city could turn to chaos in a matter of seconds.  Again, I decided to move my car even further outside of the curfew zone.  I drove over the bridge and parked at the Trinity River Overlook and made my way towards the courthouse.

Immediately, the police presence made me nervous.  Why are there so many?  I noticed a group of officers hanging out on the backside of the courthouse, so I decided to try and get a bit of information.

“Officer, do we risk arrest being at the steps of the courthouse?” I asked, unsure how he would respond.

“For now,” he said.  “But the judge is trying to expedite an expansion of the curfew zone to include government buildings.”

I thanked the officer and made my way to the front while silently questioning the legality of the judge’s intentions.  “Can they just change things like that in real time?” I thought.  “Surely not.”

On the front steps of the courthouse, there was an impassioned yet peaceful protest occurring.  The speaker, Alexander, was inviting people forward to share their stories while demanding change through united action.  One of those being city councilman Adam Bazaldua, who delivered a speech supporting change. There were desperate stories of the toll that police brutality and systemic racism has taken on the African American community in this country.  Alexander spoke passionately and directly in front of his crowd.  He consistently referred to the heavily armored riot police, state police and National Guardsman watching nearby as “Teletubbies”. 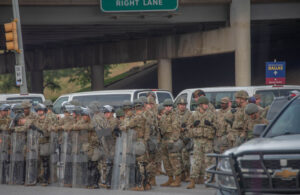 Despite all the commotion, the one thing that struck me as I made my way around the crowd was the level of police presence.  I understand the need for standing watch over curfew zone lines, but this rivaled an occupation of a foreign country.  You would have thought the two-block radius had just experienced some natural disaster.  There were countless troops in formation nearby, members of state police blocking intersections and SWAT team vehicles littered throughout.  All under the watchful eye of Police Chief Renée Hall, who was giving an interview to members of the media.  If the goal was intimidation from Chief Hall and the Dallas PD then mission accomplished.

When the speeches concluded, Alexander led the crowd onto the street in front of the courthouse and the group began to march north.  The sunset was burning a fiery pink and as a cool breeze resulted in a mild temperature, given the time of year.  In normal times I would have been enjoying a beer on some patio on a night like this.

When the group of hundreds approached the next intersection, we found it blocked on two sides by SWAT team vehicles.  The group came to a standstill, but the chanting continued.  Using the loudspeaker on one of the tanks an officer spoke. 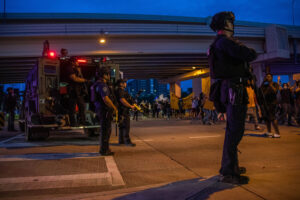 The group was left with only one option – take a left and head up the bridge.  The protest’s front line began moving and hundreds followed.  Later in the week, Chief Hall would claim in a press conference that the group was warned not to go up the bridge. However, I never heard any warning.  In the days that followed I would read numerous reports validating my experience in this moment.  This wouldn’t be the last discrepancy between what I experienced and what Chief Hall would report happened that night.

It wasn’t long after the group made their way up the bridge that chaos ensued.  Almost immediately, protesters were met with a line of riot control police officers waiting for them atop the bridge.  In support of them were multiple police vehicles who were blocking the bridge traveling east towards downtown.  Chief Hall would later say that the roadway was not closed to through traffic. However, I did not see any stalled traffic on either side of the bridge.  In fact, the police’s reaction was so immediate that it appeared as though they were lying in wait. 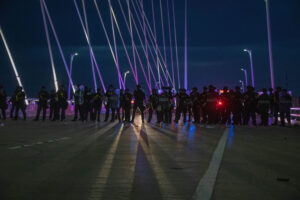 Police officers, decked out in riot gear, began firing what would later be labeled as sponge bullets and balls filled with mace at the unsuspecting protesters. The crowd’s reaction was horrific. The result of the “riot control” atop the bridge was devastating.  It was an ambush.

A protester laid bleeding on the ground, surrounded by aiding allies, as sponge bullets flew through the crowd.  At times making direct contract with the bridge’s lights.  Parts of the crowd would take to their knees – “HANDS UP, DON’T SHOOT” became the chant.  Other parts fled for safety down the bridge – they were met by another wall of riot police.  Both sides of police continued to advance.

With protesters on their knees, tear gas filled the air for the third time in four days.  Chief Hall would claim smoke, not tear gas, was used on the bridge Monday night – this is untrue.  I saw and I smelled it – I photographed it.  The stench was undeniable, the painful cries from young protesters desperately calling for help as the gas (which was prohibited by the Geneva Protocol of 1925 for use in wartime) filled their unsuspecting eyes. 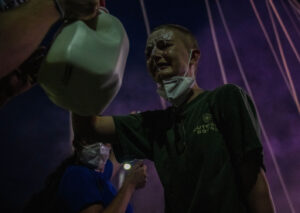 As swarms of protesters stood, sat and laid with their hands up the mob of police officers executed the final stages of their plan and surrounded the protesters on all sides.  This riot control strategy is known as “kettling”: a tactic used by police that corrals demonstrators into a confined space, so they can’t leave.  Much like herding cattle into a corral.

Thankfully, I wasn’t hit with anything more than a wave of tear gas.  The “less-than-lethal” sponge bullets designed to do less damage than the popular rubber bullets missed me by inches.  Others weren’t so lucky.  As the chaos calmed, I noticed people wearing fresh blue and black bruises.  There was a spray of blood in the middle of the bridge.

From here, waves of Dallas PD, state police and National Guardsman came in and out of the containment zone.  With their faces buried on Woodall Rodgers, protesters began getting their wrists zip-tied, forced to sit in rows off to the side and ultimately transported to pre-staged dart buses that were purchased by the city manager at auction ahead of the curfew.  It would be hours until the last protester was taken down the bridge. 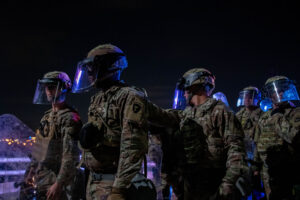 I made my way around the zone while constantly reminding the new waves of police that I was a member of the press.  I witnessed emphatic tears, people calling out for their friends, a police officer making a joke of the situation.

“Well, this isn’t Afghanistan, this is Dallas,” he responded.

There were protest signs littering the street and detainees wearing Cowboys championship t-shirts.  These people are Americans, violently detained on an iconic bridge, their own beds not too far away.  All for simply exercising their right to protest peacefully.  Throughout the evening, I saw no violent attempts to damage property, no reason for the militaristic response from the Dallas Police Department.  In fact, when a protester hurled a water bottle towards police in an attempt to fight back, he was yelled at to not provoke the officers. 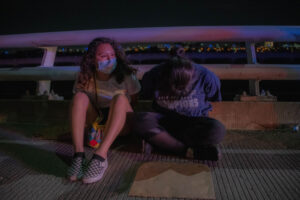 The chaos I witnessed on a week ago was completely avoidable.  The response from police speaks to the greater message that has inspired thousands of protesters around the world to take to the streets.  It is the result of a policing system that resembles an occupying army rather than a group sworn to protect and serve the community.

Experts, such as Climate Zero, argue with statistical data that the militarization of police does nothing to protect the citizens.  It is a culture born out of political policy decisions such as President Bush’s 1990 program to loan excess military equipment to local law enforcement.  In 1997, President Clinton expanded the program which allowed agencies to permanently acquire the equipment – as long as it was used in the first year.  This type of program provides an incentive for police to use this type of equipment, even if the situation doesn’t call for it.  Now, more than 20 years removed from Clinton’s expansion of an already questionable program, we’re seeing the dramatic results play out in real time.

What happened on the bridge last Monday was an unacceptable and excessive use of force.  Frankly, it wasted large amounts of taxpayer dollars while violating their first amendment rights at the same time.  It forces you to wonder where else that money could be spent.  If the funds were properly allocated in a responsible, community driven way what would be the result?  For now, the normal is police using militaristic strategies and weaponry against their own people as if they were an invading army.