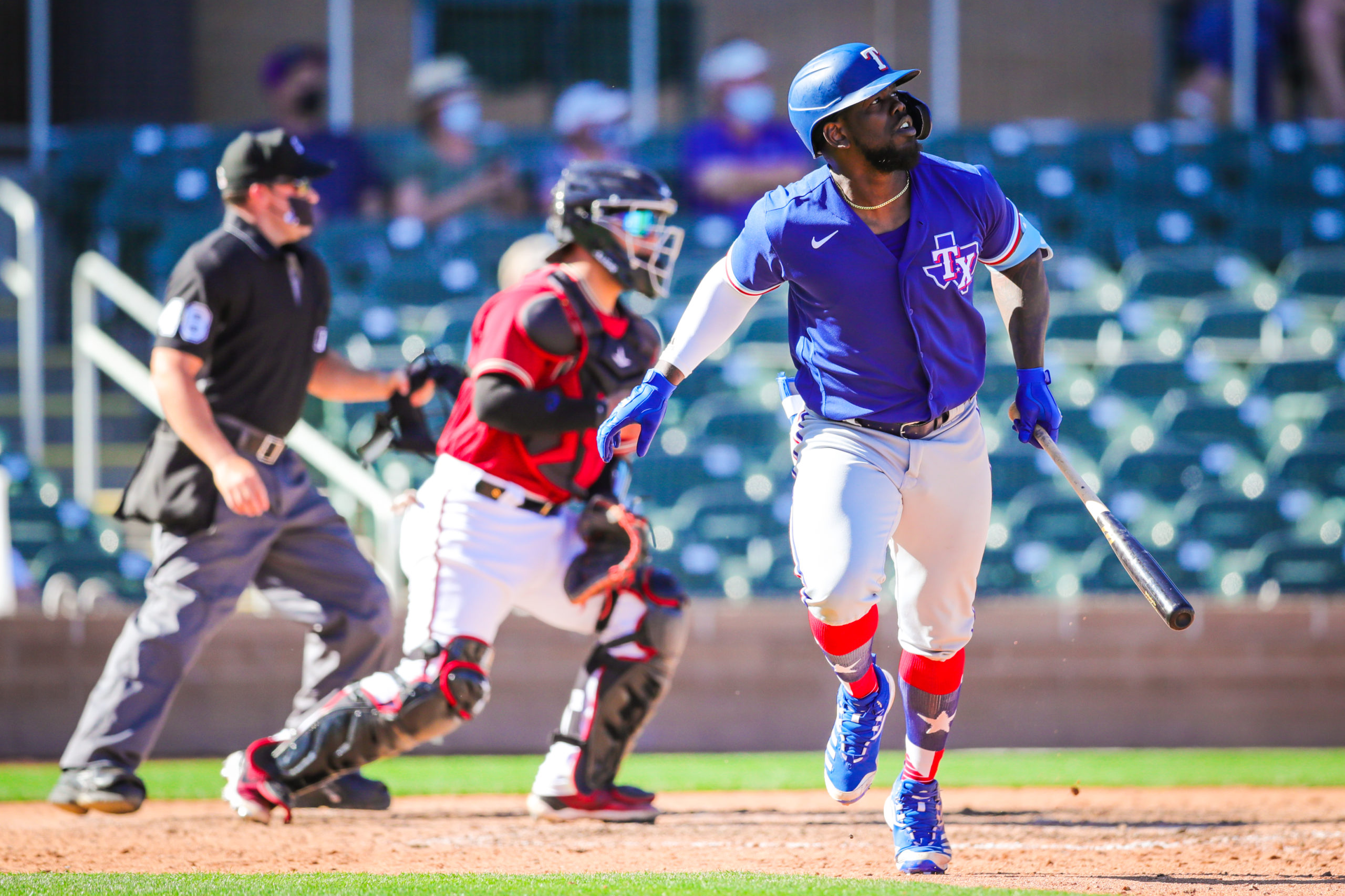 Adolis García highlights the Rangers Month of May Awards

Adolis García highlights the Rangers Month of May Awards

May was a roller coaster month for the Rangers. It started well, with the club reaching .500 nine days into the month. However, a homesick Rangers club had issues on the road, and the club lost twelve straight road games to close the month (tied for a franchise record). In addition, the Rangers lost fifteen of their final nineteen games to end May. I can say only two words to make everyone have some positive vibe in May, Adolis García.

Player of the Month (Adolis García)

Picking García as the player of the month is the easiest decision I’ve ever made. Every teammate you turn to talks about the inhuman month that Adolis put together. García ended May hitting .312 with eleven home runs and twenty-seven RBIs. It’s undecided if Adolis gets the AL Player of the month in May, but he deserves a shot at it. We’ll see how June transpires for Adolis García.

Game of the Month was a tough one to choose. Last month, I went with Joe Musgrove’s no-hitter, and in May, the Rangers were no-hit. However, I was going the positive route and narrowed it to the García walk-off against the Astros or the great comeback finisher against the Mariners. The decision came down to opposition, crowd, and a little El Bombi. You could have theoretically made a case for all three games at Globe Life Field against the Astros, but the walk-off homer sealed the deal.

I can’t give all of the credit to Adolis for making this play possible. The quick pick that Jonah Heim made to tag Kyle Lewis is fantastic in itself. It was pure defensive collaboration, and they won the game for the Rangers that night.

I asked Joey Gallo about Adolis in the outfield, “I get real excited when he throws the ball,” Joey said. “It’s exciting to have another partner in the outfield to throw the ball like that. When a ball is hit to center field and he has a shot to throw a guy out, I’m screaming at what base he needs to throw to throw the guy out.”

Kyle Gibson returned to Target Field and pitched against his former team, the Twins, for the first time. It was a welcoming reunion, and Kyle pitched outstanding on that Tuesday evening in Minneapolis. Gibson provided two amazing quotes before and after the game. I asked Kyle if any friendly smack talk occurred before Tuesday’s game. Gibson told me he had to be careful because Byron could wind up being his future father-in-law between his daughter, Hayden, and Byron’s son, Britton (You don’t want to mess up that future relationship). However, he did allow two home runs, one to Byron Buxton and the other to Willians Astudillo that night. I asked Kyle after the game if it was awkward hearing cheers after allowing a home run, and he gave his honest answer.

Asked @kgib44 if it was awkward hearing fans at Target field cheer when he gave up the homers to Buxton and Astudillo.

"It's better than what they used to do, they used to boo me when I gave up a homer. That was way worse." #StraightUpTX #Rangers

One run, the Rangers were one run away on that day from making the “Sonya Rally” a thing. This lady in the bottom of the seventh randomly shouted “Mary.” Then during the top of the eighth, she cried “Sonya” for whatever reason. At the time, Texas trailed 9-3, then when she started yelling “Sonya,” the Rangers put five runs on the board, coming just short on that day. To this day, I don’t know if she ever found Sonya or why this happened. I’m just sad that the Rangers have only one more trip to Anaheim, and by that time, Angel Stadium will have total capacity. Therefore, we may not hear random shouting anymore.

Joey Gallo has homered, this game is getting close and I thank the lady who yelled Mary and now Sonya. It’s 9-5 Angels #WeBelieve #StraightUpTX pic.twitter.com/d3loNq1RE4

Chris, I’m so sorry, but I’d be a fool if this didn’t make the awards. Look, I’ll say this. My buddy Chris owned this tweet from the moment Corey Kluber made history. Those are the kind of tweets that you have to bask in the glory that they fall in and applaud. The only two things that would have made it better are if Chris tweeted it three minutes later and Kluber’s no-hitter came on a full moon.

Yes, I understand this call got overturned, but the fact that it even went to review still baffles me to the day. Jose Rojas fumbled the ball, but second base umpire Dan Mertzel said he held the ball long enough to rule Charlie Culberson out. Imagine before replay a call like that happened and in a close game too.

Top 9th – @Rangers challenge call that Charlie Culberson is out at 2B; call overturned, runner is safe. Powered by @Mitel. pic.twitter.com/mQ6wX2s8bA

I may be the bearer of bad news, but teams are starting to mimic the Rangers winning traditions, much to Chris Woodward’s dismay. Woody doesn’t like being a trendsetter, so thank gooodness he didn’t go into modeling. I bring this up because the Cowboy Hat tradition could dissolve, and this may be the final month the award is given out. “I didn’t want this to be a trend,” Woodward said, “In fact, we’ll kind of stop that, and we’ll think of something else to do. I don’t want to be the trendy guy.” The club initially started the tradition in celebrating individual performances and get everyone involved. We also had some major hat controversy in May too.

Chris Woodward said that he wanted Adolis García to have the hat again, but Adolis said no and gave it to Isiah Kiner-Falefa. Kiner-Falefa proceeded to give it to Kolby Allard.

That said, let’s celebrate all the great Hat pictures. In between three, Hyeon-Jong Yang was a good look, Brock Holt looked like a true Texan, but is disqualified since he shaved the mustache off on this road trip. Therefore, Mike Foltynewicz wins the award. The only thing that would have made Folty’s look better is if he didn’t tie it back for postgame and of course entered a whole conversation about Folty’s hair. Let the long hair flow, but I’ll give him a pass since prior to that day he never pitched with his hair tied back. I also need to take any of Mrs. Foltynewicz’s hair wisdom too.

The choice to go with the ponytail today was a suggestion by his wife. It was either that or it's coming off completely. Thank god he pitched well so it can stay another week.

Expect Folty to go ponytail in his next start. #StraightUpTX @Rangers pic.twitter.com/7CGwvnabro

Poor Joey. On May 17th, Joey reached on a walk as the ball squirted away from Yankees catcher Kyle Higashioka. Joey thought about taking second base too, but stopped and brakes and took a major tumble face first. Now, I didn’t quite feel a ground shake in the press box and I’m sure there was some registry on the Richter Scale, but Joey was okay and everyone had a good chuckle, especially Rangers manager Chris Woodward. The next day, Joey’s teammates had some fun.

Here is @JoeyGallo24’s response on IG: