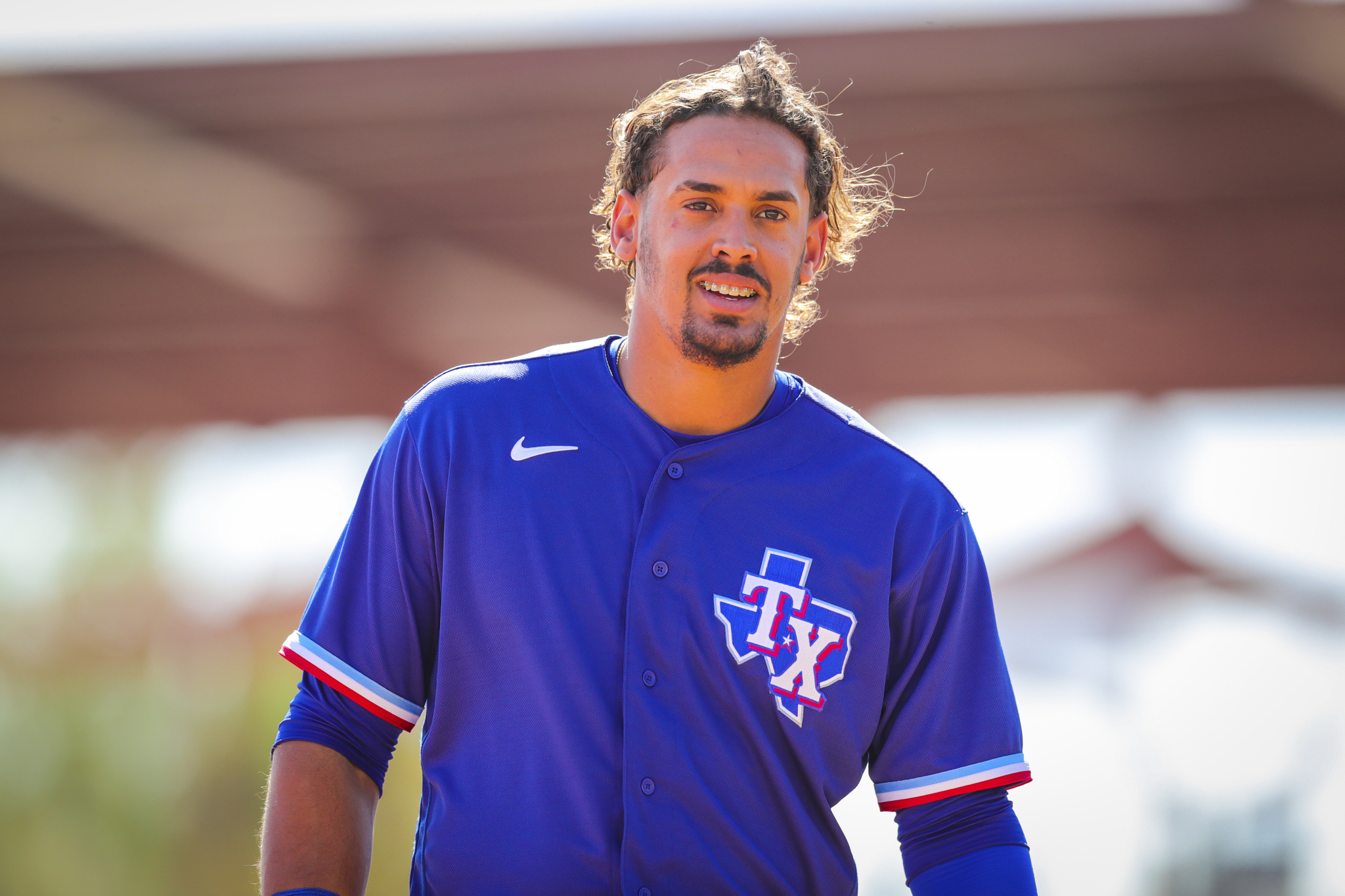 After losing the 2021 season due to injury, what does the future hold for the Ronald Guzmán with the Rangers?

After losing the 2021 season due to injury, what does the future hold for the Ronald Guzmán with the Rangers?

On April 12th, Ronald Guzmán suffered a nasty knee injury on the Tropicana Field turf playing left field. That day was Guzmán’s first MLB start in left field, and his 2021 ended with just seven games played and sixteen at-bats. He had surgery on April 28th after having  knee surgery to repair his torn meniscus.

“It really sucks this year getting out pretty much that first week of the season,” Guzmán told me. “Seeing the season wasn’t going well for the team and not being able to be there to help them really sucked [and] to be home watching the game and not being able to do anything about it.” Guzy entered the 2021 camp in a first base battle with Nathaniel Lowe. The consensus out of spring was to have Guzmán play occasional left field and first base because he had a decent spring. Unfortunately, Guzman mustered up only one hit in his sixteen at-bats (a home run).

Ronald Guzmán has been working back to original form. Says he’s about 60% and has been hitting in the cages. #StraightUpTX pic.twitter.com/xnXLEio7mS

The question becomes what Ronald’s future is with the Rangers, and if we might have time traveled back to the 2021 spring first base scenario? Well, according to Rangers’ General Manager Chris Young, not really. “I think first and foremost making sure [Guzy] is healthy. That’s the primary focus at this point.” The timing of the injury could be detrimental for Guzmán considering the Rangers are in the same pickle come next year. Guzmán could still audition for a spot at first base, but he’s out of options if he doesn’t make the team. “It was an important year for him, no fault of his own. He was going after a fly ball playing the outfield for the first time,” Chris Woodward said to me. “Sucks, but you know whatever holds, he’s put a lot of work in to get healthy again, and hopefully he can find some success, come into camp, and earn a spot.”

In the meantime for Guzman, he feels like it’ll be one more month before he’s ready to get things entirely going. He started playing catch a couple of weeks ago, plus last week starting hitting the cages. He’s aiming to take outside batting practice this upcoming week but hasn’t worked on anything regarding first base. However, Guzmán projected to me about two to three weeks before working on his first base routine. “It’s been crazy to me, [but] it is what it is that I obviously got to get better,” Guzy told me. “I feel like the main priority for me right now is trying to get healthy,” Guzmán said he likely to play a little winter ball in the Dominican. “I don’t want to have any type of expectations,” he said. “I feel like with all this free time. I’ve learned a lot about myself.”

Ronald Guzmán, "this is the longest I've ever been without grabbing a bat my whole life. I've been playing baseball since I was four."

Story on Guzmán and the Rangers possible plans coming up in the next few days. #StraightUpTX

From a mental standpoint, Guzmán told me he’s a guy that thinks a lot even when he doesn’t have to (I can relate big time), but Guzy feels he’s grown as a person during this downtime recovering from injury. He took a bad situation and turned it into revamping himself. “I feel like I’ve improved [a lot] on the [mental] side, and I feel like I’ve learned so much about life. I see life in a different way in so many different aspects.” Specifically, during his road to recovery, he was watching pitching and studied on his swing. Right now, he’s simulating his swing, but he’s not at the point where he can fully commit. The hope is Guzmán is fully rested and gets a shot in Winter Ball, and comes to camp one-hundred percent ready to go.

As far as the hair goes, it’s here to stay. “I don’t think I’m going to cut it anytime soon. Hopefully, my mom doesn’t cut my hair in my sleep,” Guzy chuckled. While there’s bias to that, Guzmán told me that he’d earn the award for best hair on the club if he were playing. Not Charlie Culberson, Jonah Heim, or Mike Foltynewicz. It is Ronald Guzmán.

Nevertheless, it’s early to write off Guzmán’s tenure with the Rangers. “I think if Guzy is healthy and playing to the capabilities that we thought he can achieve, certainly, he has a place on [all] thirty organizations,” Chris Young told me after asking him if he still has a future with the Rangers. “Health is the biggest component to that moving forward, and the hope is to get him healthy and then see what kind of player he can be.” It may be more difficult for Guzy to snag a spot on the roster than this past Spring, but it’s not an impossible feat. So don’t destroy the condor nest in Arlington yet.