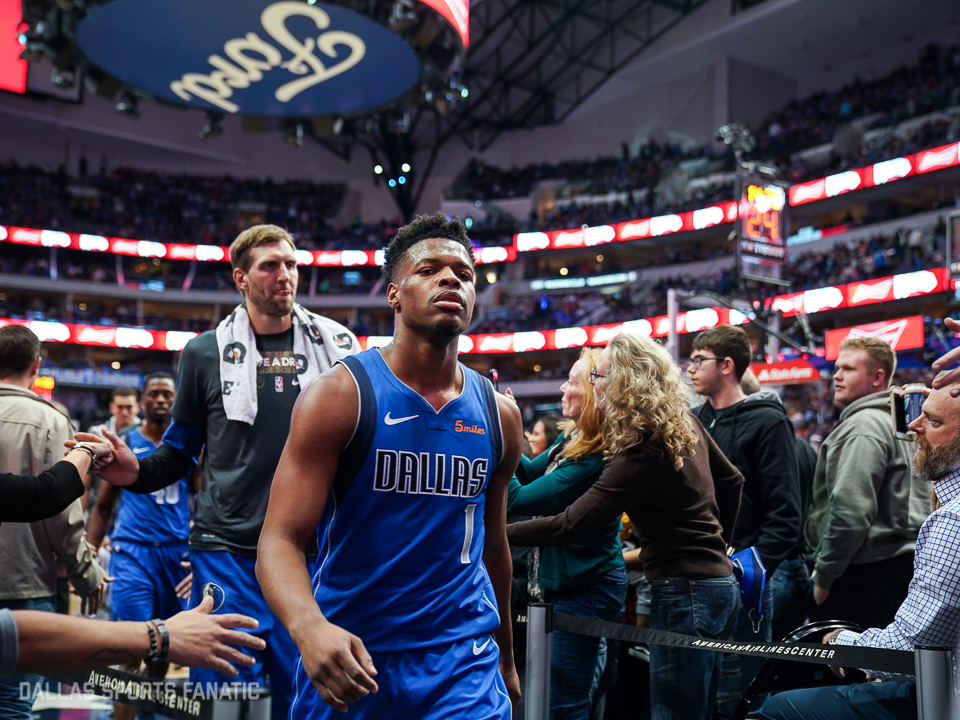 Appreciation for the Mavs players sent out in the Porzingis trade

Appreciation for the Mavs players sent out in the Porzingis trade

Following Wednesday night’s blowout win over the New York Knicks where Dennis Smith Jr. notched a triple-double, Wesley Matthews had 17 points with five made three’s and DeAndre Jordan had only had three baskets but they all came off feeds in beautiful pick-and-roll situations with Smith or Luka Doncic, it seemed like momentum was slightly building for the current team.  It made them winners of three of four games since Smith’s return from his trade melee of earlier in the month, with the lone loss being a close-loss to the contending Toronto Raptors on Sunday night.

As was well documented on Twitter yesterday, it probably only took about two or three hours for a deal between the Mavs and Knicks to materialize on Thursday afternoon.

The Dallas Mavericks are nearing a trade to acquire Kristaps Porzingis from the New York Knicks, according to league sources

This tweet from the Dallas-based Marc Stein was capable of making me fall out of my chair at work in the middle of the day.  My Mavs-excitement-meter went from about a solid 58 to a full 100 in a matter of seconds and it was hard not to run a lap around my office and not high-five my co-workers who aren’t exactly a bunch of MFFLs and wouldn’t know anyone involved in the trade if the players were to walk up to them and introduce themselves.  Even though I had to share my thoughts and spread my excitement just on the internet and through texts with friends, it was an electric afternoon for Mavs fans everywhere.

Of course with any trade, you have to send back some players to the other team too.  In this trade, the Mavericks happened to ship out 3/5ths of their starting lineup and their lottery pick from a draft less than two years ago.  While most Mavs fans won’t mourn the basketball loss of DeAndre Jordan and Wesley Matthews too much, seeing Dennis Smith Jr. go after briefly holding out hope they were going to patch things up with him is a bit of a hard pill to swallow.  There’s really no better way to wash down a tough trade pill than to acquire an 7’3 All-Star who easily ranks highly as one of the most unique talents in the league.

While it was easy for Mavs Twitter and Facebook (oh my goodness, Mavs Facebook…) to say bye to the trio of starters Dallas sent packing on Thursday, it’s important to pause and take a second to appreciate what they did during their time in Dallas.  Whether you care to admit it or not, these guys are human beings who did care about helping the team you root for get better.  I’d like to say a few words about each of them, if I may…

Wesley Matthews
Career with Dallas: 258 games, 12.9 PPG, .398 FG%, .369 3P%
Look, I know it’s easy to give Matthews the Lloyd Christmas “WELP, see ya later!” treatment, but take a second to appreciate what this guy did during his time here.  Sure, his shooting percentages were never as high as they were during his days in Portland and he could occasionally try to bite off a little more than he could chew with his facilitating on offense, but Wesley Matthews was a very solid wing for the Mavs over the course of the last three and a half seasons.

As we all remember, Matthews agreed to sign with the Mavericks back in the summer of 2015 with the idea that DeAndre Jordan would be coming to Dallas too.  When Jordan famously backtracked on that, Matthews was quick to honor his commitment.  Whenever he tore his Achilles in the spring of 2015 as a Portland Trail Blazer and was then rewarded with a $70 million contract a few months later, he didn’t hit the snooze button on his recovery and just take his sweet time getting back.  He busted his ass rehabbing the injury for months to make it back onto the court for Opening Night of the 2015-2016 season for Dallas.

Matthews seemed to be heavily involved anytime the Mavericks were doing a community-related project. He had a deal set up where he would donate three boxes of diapers for every three point shot he made this season.  He’s a seemingly very loving father to an adorable little girl who can’t be any more than age two. She frequently walks the sidelines of the Mavs court about an hour before tip-off while holding her dad’s hand.

While his impact on the court and contract amount never quite aligned in a way to make fans happy, Wesley Matthews was a good addition for the Mavericks and the Dallas-Fort Worth community.

DeAndre Jordan
Career with Dallas: 50 games, 11 PPG, 13.7 RPG
Even though he should have been here back in 2015, it was easy to be excited about the addition of DeAndre Jordan last summer.  The 2017 All-Star was coming off a season where he averaged a career high 15.2 rebounds per contest and Dallas desperately needed help on the boards.  Jordan delivered on that during his half-season with the Mavericks, averaging close to 14 boards a night.

DeAndre Jordan’s 50 games in a Mavs uniform will be funny to look back on in five, ten or fifteen years, but for now I will have fond memories of them.  Yes, he was a massive disappointment on the defensive end with him frequently rolling out the red carpet in the paint, but he was a good center for Luka Doncic to work with on offense in his rookie season and he was one hell of a personality to have around.

In my first season being around the team as a credentialed writer, there haven’t been many more guys who do more to lighten up the media than DeAndre Jordan.  He’s always a hoot in the locker room, seems to get along insanely well with all of his teammates and always had the flashiest outfits pre and postgame.  My first day covering the team with a credential was back at Media Day in September and Jordan was very friendly and gave strong answers whenever I asked to interview him.

The Mavericks locker room has been quieter since the loss of J.J. Barea for the season, but losing Jordan will now give it a different tone completely.  Let’s hope Tim Hardaway Jr. is a funny guy.

Dennis Smith Jr.
Career with Dallas: 101 games, 14.5 PPG, 4.5 APG, .406 FG%
It’s hard to be excited about the Mavericks giving up on a 21 year-old electric player they drafted less than two years ago, but whenever Kristaps Porzingis is coming back in return, it eases the pain a bit.

We all had sky-high hopes for Smith when we first saw him donning a Mavs hat back on Draft Night in June 2017.  While he never quite met those expectations, he still showed tons of flashes of his potential throughout his season and a half here.

When they drafted Smith, I think the Mavericks were prepared to be patient and wait for Smith’s game to develop more over a two or three year period if they had to.  They were probably even willing to do that as recently as early November or so.  Then Luka Doncic began to play at an All-Star-caliber level and it became clear this team will be better if the ball was in his decisive hands rather than waiting on Smith to figure everything out.

I don’t know what Dennis Smith Jr.’s ceiling as an NBA player is right now.  I liked what I had seen out of him in his last ten or so games as a Maverick dating back to the beginning of December.  His athleticism paired with high effort is enough to make him a very capable defender.  If he has more control in the paint, he can be a very strong finisher for a guard of his size.  His jump shot?  His ability to create for others in the half court? Both leave a lot to be desired right now. It seems as though he’ll have about half a season to work on all of that in New York before they’re probably willing to rehaul the entire roster while swinging for the free agency fences this summer.

Smith didn’t make himself available to the media too much this season.  Whenever he did, he seemed to be a nice kid who definitely was liked by his teammates and wanted to improve his game even if his passive body language said otherwise.  Smith always has this smirk or side-smile on his face that might make it seem like he is upset, but I think that’s just his neutral mood persona.  In his week-plus back with the team, he has said all the right things and made himself available to talk after each game on the homestand last week.  So at least he is aware enough to know he needed to step up and do things like that if he wanted to get his career back to where everyone expected it to be at this point.

Everyone in Dallas is definitely rooting for Smith’s success.  Hopefully the bright lights and electricity of New York City suit him well and he makes good enough of an impression over the next few months to make himself a part of the Knicks future whether they strike lottery/free agency gold or not.  Good luck to you, Mr. Smith.

While Kristaps Porzingis, Tim Hardaway Jr., Courtney Lee and Trey Burke are sure to be exciting additions to the Mavericks that will have most of our attention the rest of the season, it’s important to take a second to appreciate what Smith, Jordan and Matthews did for Dallas in their time here.  While none of them were at their most favorable standing with the fans as of yesterday, they were still very major contributors.

However the rest of the season goes for them in New York or elsewhere, Mavs fans and myself sure wish them all the best of luck and thank them for the contributions to the team.

Now let’s get “Porzingod” on the court as soon as possible.