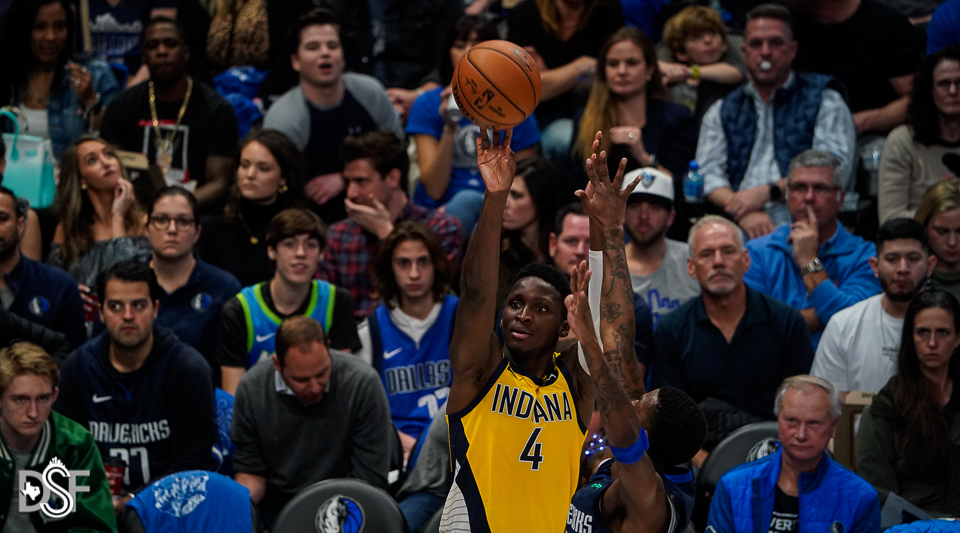 As Oladipo rumors begin to creep up, Mavericks need to make sure their “third star” is the right star

As Oladipo rumors begin to creep up, Mavericks need to make sure their “third star” is the right star

The latest Mavs offseason rumor is one that doesn’t even mention them as a possible destination for the player in question.

Jared Weiss of The Athletic, who covers the Celtics for the site, mentioned in his 2019-2020 Celtics obituary piece on Monday that Indiana Pacer stars Victor Oladipo and DFW native Myles Turner could possibly be interested in finding their way out of Indiana before the start of the 2020-2021 season. Here’s the full context:

“[Gordon] Hayward won’t be opting out of his contract unless he has a long-term extension in place, which will be hard for a 30-year-old with a concerning injury history. Indiana is still home for the Haywards, and with Victor Oladipo looking to move on this offseason, according to sources, and Myles Turner possibly in the same boat, there could be an opportunity for Ainge to move Hayward and the abundance of draft picks in his war chest in a mutually agreeable way.”

Mavs Twitter somehow found a way to turn this into a timeline-filling conversation about whether Dallas should pursue Oladipo this offseason. With the 28-year-old guard under contract for one more year at $21 million, the only option would be a trade for the two-time All-Star.

While the Mavericks certainly have limited assets to deal in any trades this offseason, the circumstances surrounding Oladipo’s last two seasons could possibly make him very obtainable for Donnie Nelson if other suitors are timid in their pursuit of a deal with Indiana.

Following a 2017-2018 All-Star season where he averaged 23.1 points per game on 47% shooting from the field and led the Pacers to a 48-34 record and a rousing seven game first round series against LeBron James and the Cleveland Cavaliers, the Oladipo stock has certainly been on a downward trend since. After rupturing the quad tendon in his right knee in January 2019, staying on the court and resembling his old self has proved to be a mighty challenge for Oladipo.

He appeared in just 19 regular season games this season and shot just 39% overall from the field — a career low. Things weren’t much better in the postseason as ‘Dipo and the Pacers were quickly swept out by the now East champion Miami Heat and coach Nate McMillan was fired just two weeks after being given a one year contract extension.

Trading for Oladipo would certainly be a major move for the Mavericks. I would stop short of calling it an “all-in” type of move because I don’t think that his depleted value would completely gut the roster and their cupboard of limited assets. A trade that seems to line up salary-wise would be Tim Hardaway Jr. and his $19 million salary for 2020-2021 if he were to opt in plus another minor role player and/or draft picks. Considering Indiana’s ability to contend for home court advantage in this season’s playoffs despite only getting 19 regular season games from Oladipo, I wouldn’t think they would mind plugging in a high-quality catch-and-shoot wing, like Hardaway Jr. who was durable last season, as a replacement for a one year trial run.

I’ve seen the idea of needing to have Kristaps Porzingis headline any deal bringing another star player back and that’s just a flat-out no from me at this point. Too soon.

For Dallas, it wouldn’t be too exciting to simply bring the vast majority of this season’s roster back and hope for growth. It’s probably the right play, though.

Dallas’ future seems as bright as just about any team in the NBA thanks to Luka Doncic’s rise to superstardom. However, the justifiable questions surrounding Kristaps Porzingis, his knees and the remaining four years and $131 million of his giant contract make a roll of the dice on Oladipo a little less easy to get behind.

I don’t think the Mavericks are at the point where they need to be swinging big for a third player behind Doncic and Porzingis unless it’s a piece that will for sure be here for several seasons, if not the “long haul.” With just one year remaining on his deal and just 55 games played the last two regular seasons (Porzingis played 57 regular season games in 2019-2020), it doesn’t like Oladipo is the right kind of gamble at this point of Dallas’ rise towards championship contention.

Everyone is talking about the Mavericks and Giannis Antetokounmpo in the summer of 2021, but the odds are that’s not going to happen. Oladipo is one of a dozen or so current/former All-Star players that are slated for potential free agency next summer. Why not let Dallas have another season of growing and maturing together and then make the swing next summer with ample cap space and even more of an impressive resume for Luka Doncic and company in a free agency pitch meeting?

It’s not sexy, but I think it’s the right play at this time. I know that will not stop one soul from leaping on any opportunity to link Dallas to notable names that pop up as available this fall.

You can always dream, Mavs fans.