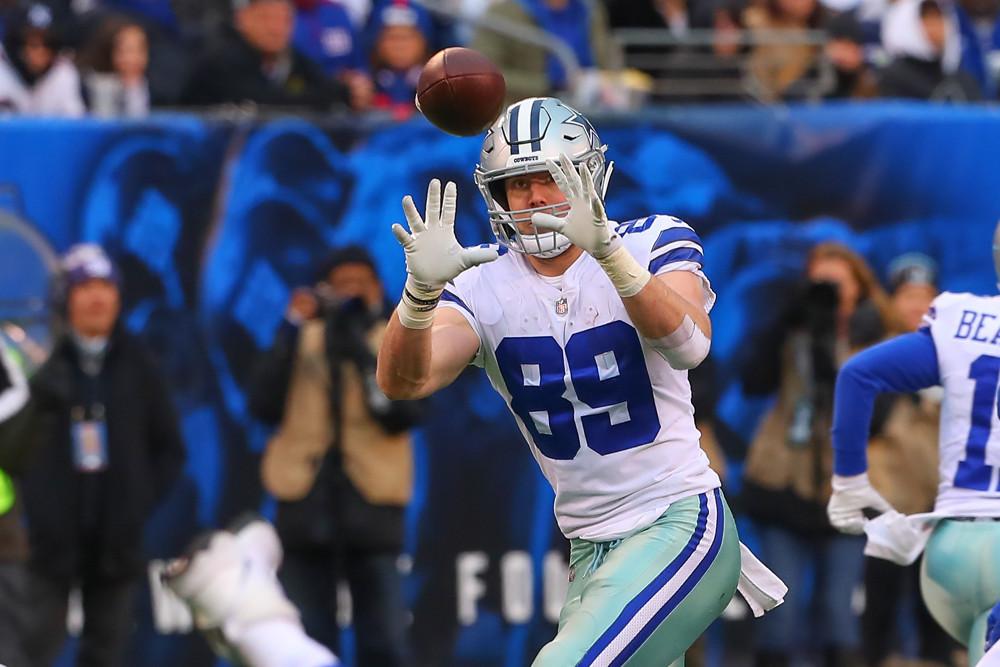 It’s been a long minute since we were formally introduced as fans to Blake Jarwin, but most seem to remember the first time hearing his name as the guy who dropped three touchdowns on the Giants at the end of the regular season in 18-19.

And that was about it. He had started four games that season as the second tight end behind Geoff Swaim after James Hanna and Jason Witten had surprisingly announced their retirements. After his three TD game, he went dark again and ultimately wound up losing out on the opportunity to start after Witten decided to return for another season.

However once again the wheel has kept turning as Witten has again left Dallas, this time for the inaugural season of the Las Vegas Raiders after 16 seasons with the Cowboys- This time, no teary-eyed goodbye- and Blake Jarwin is face-to-face with the opportunity to be this team’s starter realistically for the first time since his professional career began.

Despite Witten’s return last season, the Cowboys still put Jarwin to work on the field and gave us a glimpse of what he may be capable of as a starter. Although playing only about a third of the snaps from last season, Jarwin made up about two-thirds of Witten’s total production that season and also managed to pull that off in about half of the receptions as well (31 to Witten’s 63).

What the stats seem to reveal is that Jarwin actually managed to outpace Witten as a deeper threat (Jarwin posting 6.7 yards per reception before the catch to Witten’s 5.8), and nearly matching Witten in yards after the catch as well (Jarwin’s 157 to Witten’s 162)- All while playing fewer snaps and posting a similar reception/target percentage (Jarwin- 31/41, Witten 63/83).

Oh, and by the way- Jarwin also hauled in three touchdowns to Witten’s four in 2019.

Look, this is not an easy conversation to have. Jason Witten has been a favorite of thousands of fans for the better part of two decades of Cowboys football and is a lock for the Hall of Fame. While Blake Jarwin has shown promise as a starter and proved in hindsight to be the more dynamic player between the two last season, it’s difficult to have this discussion without it seems to be an indictment on Witten’s part, but I’m afraid this is the best way to convince fans to be excited about Jarwin as a starter in 2020.

And while Jarwin’s run blocking game isn’t quite up to par with how Witten had developed as a blocker, he is nearly an exact copy of Witten in terms of size and weight and has shown plenty of promise in that respect as well. Time will tell all while continuing his development under new tight end coach Lunda Wells and coach McCarthy.

With the Cowboys boasting what ought to be the best trio of receivers we’ll see on the field in 2020, it would not be surprising if we don’t exactly see a huge uptick in Jarwin’s numbers from last season. While he may not wind up being a focal point of the Cowboys’ offense, you could almost certainly expect Jarwin to show up for big plays this season in unexpected moments.

I can’t believe I’m advocating for someone other than Jason Witten being the Cowboys’ starter. I feel dirty.