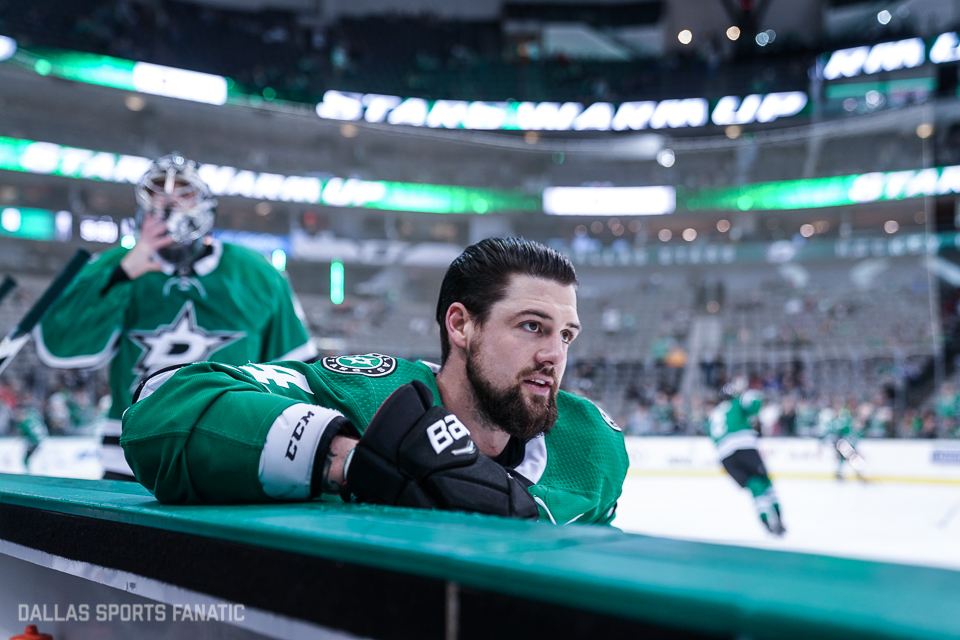 St. Louis opened up the scoring a little over thirteen minutes into the game.  Vince Dunn got on the board first, with assists by the captain Alex Pietrangelo, as well as Robert Thomas.  Home ice advantage had clearly been drawn, as the crowd roared for their Blues.

It wouldn’t be long until the Stars countered.  Zuccarello banged in a rebound after somewhat of an unusual play.  It began off a bank off of the boards, ricocheted off an official, and then to the net as it centered into the slot towards an empty net for Mats. The goal made it his his first goal, but his eighth point of the playoffs.

The second period began with a lot of back and forth.  The game was up for grabs, as the first penalty of the period was drawn by the Blues.  Ritchie got a bit of an awkward tripping call, shortly after a no call on Stars’ defenseman Miro Heiskanen.

The penalty would end in nill, but Stars began an offensive onslaught shortly thereafter. The jump in offensive aggression led to a poor penalty by John Klingberg for tripping on Vladimir Tarasenko.

The Stars came into the game leading the league in penalty killing percentage at 94.3% and continued their stellar performance, as the penalty kill maintained, keeping the game tied 1-1.

The Blues offensive prowess was unmatched by the Stars, as Ben Bishop continued to scramble to keep the Stars’ playoff hopes alive.  The Stars barely managed a few shots, as the Blues added more than 20 more on net.

Roope Hintz nearly ended the game after an incredible wrap-a-round chance.  However, the refs missed an easy call on Zuccarello as he was up ended, trying to go for a second chance play.

Regulation ended with the shots heavily in favor of the St. Louis Blues.

The first overtime period basically looked like a power play for the St. Louis Blues.  Ben Bishop stood on his head for the entire overtime, as Blues fan stood anxiously on their feet, hoping their team would finish the game.

St. Louis dominated as the shots concluded 52-27.  Both teams appeared to need a shot of espresso, at the end of 80 minutes of play.

Dallas didn’t put up much of a fight, as St. Louis battled away.  The game would end in favor of the Blues.

Three Stars of the Game

The St. Louis Blues will head onto the Western Conference Finals to face the winner of the game seven in San Jose as the Sharks host the Avalanche.