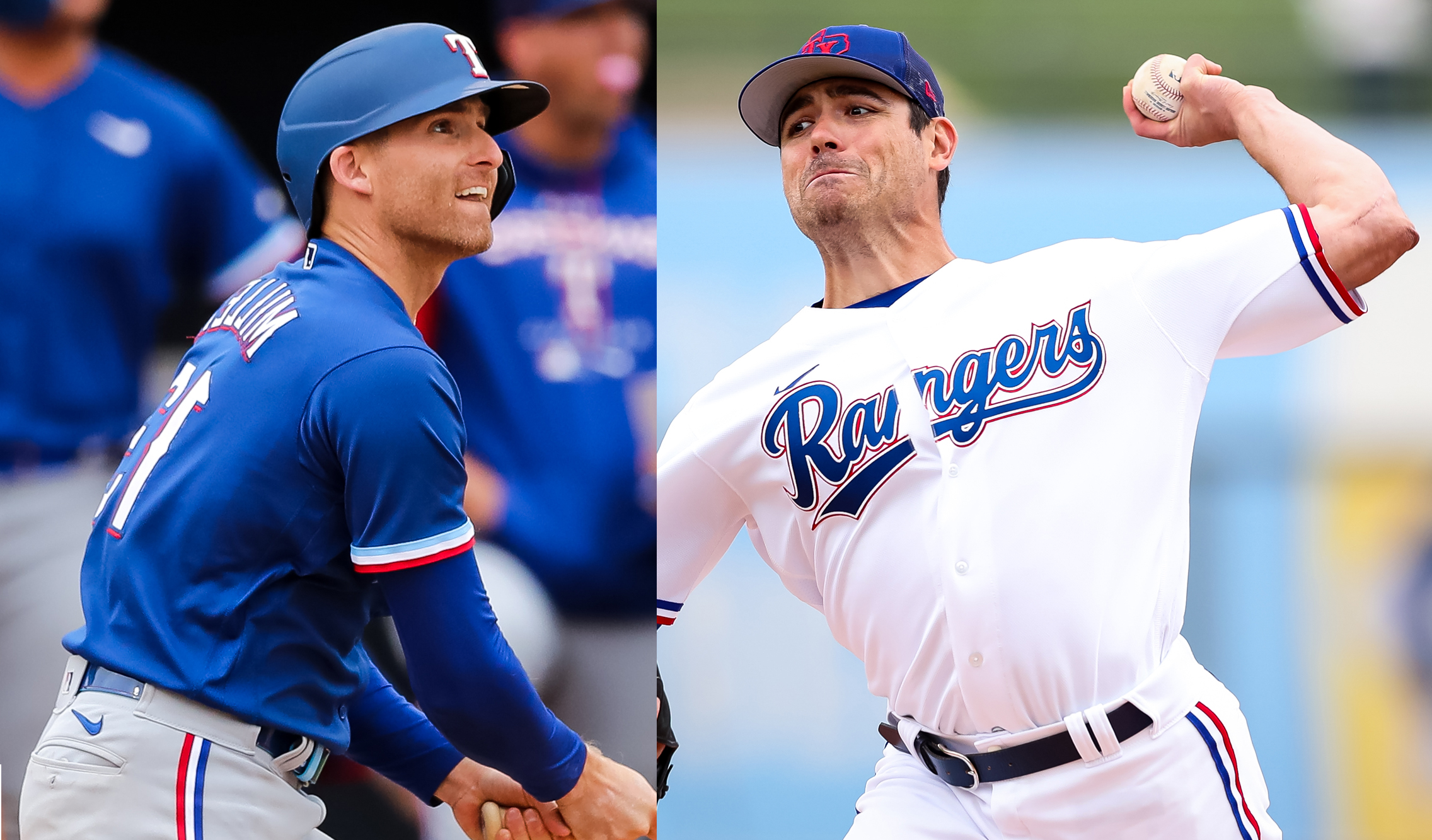 There’s an old Chinese Proverb, “Reunion after a long separation is even better than one’s wedding night.” I wouldn’t call an offseason-long separation, but 2022 is the third season Matt Moore and Brad Miller are teammates, and all three have been in different organizations. Brad and Matt were on the Tampa Bay Rays’ 2016 team until August 1st, when the Rays traded Moore to the Giants for Matt Duffy, Lucius Fox, and Michael Santos. Then in 2021, they signed free-agent contracts with the Phillies (fourteen days apart). This year, they signed three days apart as members of the Texas Rangers. “I only got to play with [Matt] for half a season. Then we traded him,” Brad Miller said. “Last year, we were locker mates in Philly and went through ups and downs together. Then this spring, [we] were locker mates in Surprise.” A veteran presence on a roster and in a clubhouse for a building team of young players is essential, and both Miller and Moore are holding down the fort. “The big leagues are a different ballgame,” John King told me. “It feels like a different feel than any other different level. Being able to have the boys around you and to be able to have someone talk to you about stuff, been there, done that kind of stuff, it’s cool.”

I asked both Matt Moore and Brad Miller on how it would be if they both reached their milestones in the same game:

They both got perplexed and pumped up to hear the news. #StraightUpTX #Rangers https://t.co/QING1W4VU1 pic.twitter.com/1rLWwO2dlW

“[Brad’s] nickname is he’s a baseball rat. He gets to the field early. He’s the type of guy that goes to bed with his bat, wakes up checking the scores, and that type of love for the game is going to allow him to play at a level people want to follow,” Matt Moore told me about Miller. On June 24th Miller played in his 1,000th career game. While his career spans ten seasons, seven teams, and three-thousand at-bats, Brad Miller remains the same dude he was back in 2013, making his Major League Debut. “Brad could be 0 for his last 20, and you would never know,” Moore told me. “We could hit the walk home last night, and you’d never know. You never see him not backing up a base when he should be. That’s what you get [and] that’s how you get to be around 9-10 years like he has.”

Rangers manager Chris Woodward and Brad Miller go back to 2013 when Woody was in the Mariners organization as a coach. “He still reminds me of the same Brad I coached. [He’s] the same spazzy just run through a wall for you [and] same energy every day. It’s just in his DNA.” Even for younger guys making their Major League debuts in 2022, Miller is already making an impact. “Brad is the man,” Josh Smith told me. “He’s the most positive guy in the world. [He’s] an extremely great guy, roots for everybody. I love the way he is in the locker room, and he gets on the field. It’s been fun to play with him.”

Eli White and Brad Miller go back to Eli’s days at Clemson. “I can’t say enough good things about that guy,” Eli told me. “I had the privilege of meeting him when I was getting cleared and recruited to Clemson, and he was a player there. So I went down to a camp, and he kind of hosted me a little bit and was my coach.” Like others, Eli turns to the positivity Brad brings but also to other aspects. “He’s helped me out a lot with whether that’s [the] approach at the plate [or] the mental side. He’s been a real asset.”

While Brad Miller’s numbers don’t look sexy overall, the clutch factor is an aspect Miller is producing for the Rangers. Brad is hitting .375 in 40 at-bats with runners in scoring position, which is top eight in the American League (30 or more ABs). In addition, Brad is hitting .467 (7 for 17) with RISP and two outs, marking him fourth in MLB among players with ten or more at-bats. I don’t want to say he’s a cheerleader, but he’s the guy that always makes people feel like there’s good energy today,” Matt Moore said. “Without Brad, it can be a quiet place for sure sometimes.”

Matt Moore began his career in 2011, including the infamous postseason start against the Rangers. Moore’s second stint with the Rangers (first was in 2018) has rejuvenated his career with a solid start to his 2022 campaign. “Pumped for [Matt Moore] how he came to camp after a tough year,” Brad Miller told me about how Moore battled having to be a contact trace for COVID, even though he didn’t have it, which kicked him out of the Phillies rotation. “He dealt with stuff out of his control, never batted an eye, and kept fighting. This year he’s reaping the rewards, and he looks amazing.”

John King told me that Moore’s demeanor as he takes the mound is what King learns the most from Matt. “You can see it on his face when he’s about to go out there. [Moore] wants to rip someone’s head off,” King told me. “He shows up [and] he’s the same guy every day. [Moore] has words of wisdom, but he’s also funny. He keeps everything loose.” When I asked Matt about the veteran leadership and seeing the younger guys perform, it brought him back to his earlier days. “It reminds me a lot of some of the dynamics I had with my teammates in Tampa Bay when I was young. With guys like [David] Price, James Shields, Joel Peralta, Fernando [Rodney], and [Kyle] Farnsworth, it sets the boundaries. To see how they’re feeding off one another and staying consistent throughout the last few months, it’s been a lot of fun and for myself reinvigorating.”

“He’s remarkable,” Chris Woodward said about Matt Moore and his influence on the bullpen. “Look at the curveball and the stuff; it’s been really good. [Moore] pounds the zone, [he] walks [a few] here and there, but overall he’s been punching everybody out, weak contact, pitching in leverage for us [and] pitching multiple innings for us.” Woodward pointed out that as soon as the club optioned Taylor Hearn, Matt had a conversation with Taylor (also, they talked over the course of the year). “Off the field, he’s been tremendous,” Woodward said.

Being a multi-inning reliever and not the Rangers’ closer, it’s likely Matt Moore won’t get consideration for the All-Star game. However, you can make a strong case for Matt. Saturday, Moore picked up his 1,000th inning pitched on a double play. In the 2022 campaign, Matt Moore allowed nine runs (eight earned) in 35.2 innings. According to Baseball Reference’s indication of high leverage, Moore yields a .115 batting average (3 for 26), and hitters have an OPS of .361. The walks have been a slight issue for Moore, but he’s been a reliable option for Chris Woodward and the Rangers.

From the outside, it’s easy to dismiss veteran presence, mainly if the guys aren’t producing. I get it, but in a young team figuring out who they are, a veteran presence in a clubhouse is as necessary as a heart to breathe. “It’s huge,” Eli White told me when I asked him how vital veteran-type players are to a clubhouse. “You got a bunch of guys with different personalities. To have those guys uplifting all the time [or] when you’re feeling a little down one day can pick you up.” So many conversations take place before, during, and after the game. The game of baseball is a lot more mental than most realize, and when you have guys that have gone through failure in addition to success, it can be the key for a young player to break through.

They both got excited when hearing the possibility of picking up their milestones the same day (Miller’s 1,000th game and Moore’s 1,000th inning). While it happened back-to-back days, both continue their quest for success together. “I feel lucky to play with a lot of guys, but [Brad Miller] and I, I think, been able to have a little bit different of a relationship,” Matt Moore told me. “Our jobs don’t always coincide, but he and I have been able to click good off the field. [So] when I knew the Rangers signed him, I was happy to send that text out and [be] his locker mate again.”