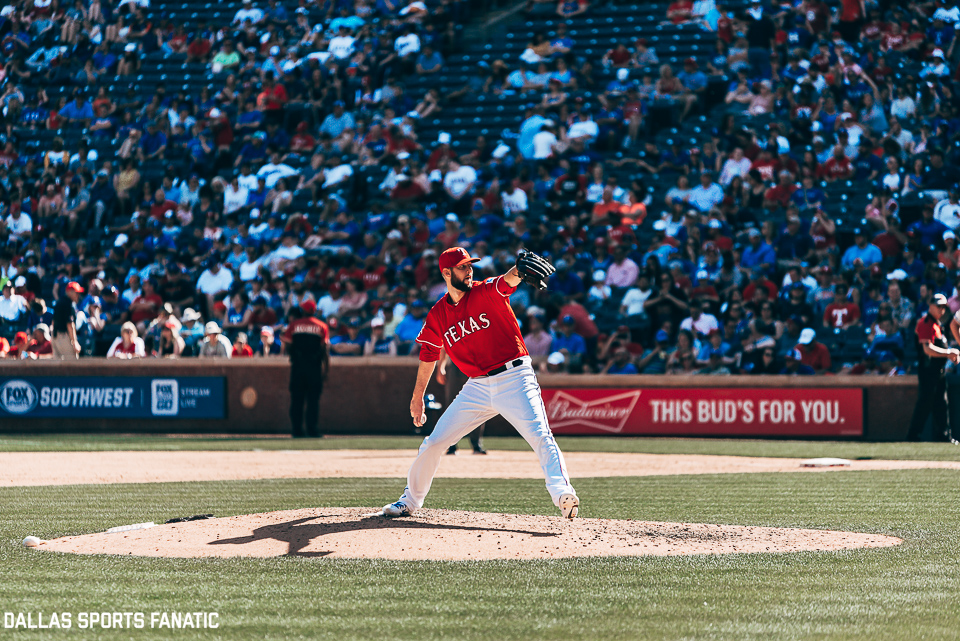 The 2019 Trade Deadline flows away and Rangers nation is a bit shocked at the results. The Rangers made a couple of small moves, but didn’t rock the boat. Players showed some relief after the final buzzer hit, though the players understood the process. Willie Calhoun, Nomar Mazara, and Elvis Andrus all agreed that it is a business and teams trade players from one club to another. “The main guys are still here, for me it’s just positive. In the near future we can just add more key players and move forward.” Elvis said before Wednesday’s game. Texas lost a bullpen piece, but in the end it was a quiet July 31st. Here are the few trades and deal that went down the past five days.

Finally Joey Gallo on the home stretch past the deadline #rangers pic.twitter.com/Tz0kTH108c

Out of all the Rangers bullpen pieces, Chris Martin was the likely candidate to be dealt. Martin becomes a free agent at the end of the season; therefore, dealing him made sense. In 2019, Martin pitched 38 innings with an ERA of 3.08. However, it was the past two months that made Chris so coveted by other clubs. Martin allowed three runs in his last 16.2 innings, walking only one-hitter. Throughout two seasons, Chris Martin pitched in 84 relief appearances with a 3.84 ERA and a 1.130 WHIP.

Chris Woodward commented on the trade after the game Tuesday, “It’s kind of new to me because I haven’t had anything like that as a manager yet. C-Martin’s done an unbelievable job for us all year. I can’t say enough about what he did for us. We’re going to miss him for sure.”

The Rangers got a young twenty-one-year-old lefty, Kolby Allard. The Braves drafted Kolby fourteenth overall in 2015 and pitched in three appearances last season in the majors. Allard spent all season with AAA Gwinnett, averaging eight strikeouts per nine innings and pitched in 110 innings. According to Baseball America, Kolby was rated in the top 100 prospects in the 2016, 2017, and 2018 season. He ranked number 12 in the Atlanta Braves system before the trade to the Rangers. Despite the brief experience in the majors, Allard is only twenty-one years old and has enormous potential. The fact that the club received a top fifteen ranked prospect in any organization’s system for only a rental reliever is fantastic.

“We’re excited to welcome Kolby Allard to Texas.” Rangers GM Jon Daniels said. “He’s a young starter who already has significant experience at the upper levels. His reputation as a competitor is well known, and we look forward to watching him compete as a Ranger for a long time to come.”

The deal is all about one thing for the Texas Rangers, and his name is Bayron Lora. The way this deal worked was the Rangers sent two minor league pitchers to Chicago so they could add to the international slot. However, the only way the White Sox would accommodate this deal is if Texas took right-hander Nate Jones. The Rangers immediately placed Nate on the sixty-day IL as he underwent right forearm surgery earlier this summer. However, the big prize is the one million dollar international bonus they got from Chicago.

Lora is a sixteen-year-old from the Dominican Republic with immense power. He’s currently playing for the Rangers’ club down in the Dominican in an informal league called the “Tricky League” (yes that is the name). The deal works in success for two reasons. First, the Rangers can offer an agreement with Bayron Lora, and they can exercise an option on Nate Jones for 2020 and 2021 (though this is unlikely). At worst for the club, they ate 1.25 million for Nate Jones if anything doesn’t transpire.

Over the weekend, Texas acquired Gibaut from Tampa Bay after the Rays designated him for assignment the previous week. The Rays drafted Ian in the eleventh round of the 2015 draft. Gibaut pitched one game in the majors this season, a two-inning outing at Baltimore on July 12th. In that outing, he allowed two runs, one hit, two walks, and struck out two in that outing. Last season in AAA Durham, Ian pitched fifty-six innings, had a 2.09 ERA with twenty-six walks and seventy-five strikeouts. It’s a reliever the Rangers acquire with little to no cost, and with relievers, you can find any diamond in the rough.

The Rangers showed interest in a few players over the course of the week including the Orioles Trey Mancini and the Mariners’ Mike Leake. However, no done deals finalized for either and the Rangers ended Wednesday afternoon with a quiet trade deadline day. Mike Minor, Lance Lynn, Hunter Pence, and others stayed all in Rangers uniforms as the club builds to the future. Either the club figured they liked the pieces and prices they have or the Rangers asking price was too much for teams like the Twins, Yankees and Nationals, all who were in on certain Rangers players. In the end, the Rangers have a few plans to make in the future, but the club is heading in the right direction.

#Rangers GM Jon Daniels on the Rangers “quiet” approach at the deadline and the lack of moves # pic.twitter.com/FZPlOTbOAo