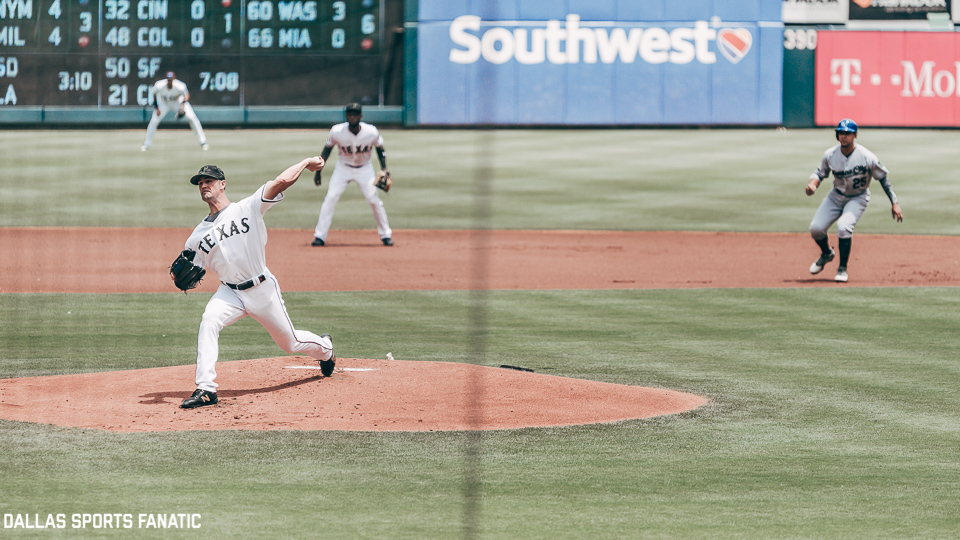 The Major League Baseball July 31st trade deadline is always a time of tremendous excitement.  Pseudo and legitimate contenders are swinging for the fences hoping that the right move will fault them over the top or merely get them into the unpredictable baseball postseason.  Teams in transition or full-on rebuilding mode can replenish their pipeline in ways that will accelerate or potentially destroy their ascension to prominence over time.  It’s a day of rolling the dice no matter what side of the deal you’re on.

For the Texas Rangers, a very underwhelming performance the first four months of the season left them with no choice but to be sellers for this year’s trade deadline.  In addition to their poor win/loss record, an abundance of veteran players on expiring contracts completed the recipe for the ultimate selling souffle.

To recap the trades the Rangers have made in the month of July:

July 8th: Received OF Austin Jackson and RHPs Cory Gearrin and Jason Bahr from the San Francisco Giants for a player to be named later or cash considerations.

July 28th: Received RHPs Eddie Butler, Rollie Lacy and a player to be named later from the Chicago Cubs for LHP Cole Hamels and cash.

July 30th: Received LHP Taylor Hearn and a player to be named later from the Pittsburgh Pirates for RHP Keone Kela.

July 31st: Received RHP Wei-Chei Huang and a player to be named later from the Arizona Diamondbacks for LHP Jake Diekman.

After nervously refreshing their Twitter feeds the last few days, our Rangers writers Dylan Duell and Garrett Jones shared their thoughts on some questions they had following today’s deadline dealing.

There were a ton of Rangers players rumored to be potentially traded leading up to this deadline. Who are you most surprised is still in a Texas uniform?

Garrett: Overall, the Rangers traded every “tradable” asset they had, and the names that left weren’t very surprising in my opinion. If I had to pick, I’d say Bartolo Colon. I would have thought that a National League contender would’ve checked in on the Rangers’ innings pitched leader, possibly as a veteran leader out of the bullpen. But since he is still here, Texas will get some quality innings out of its designated “innings-eater” down the stretch.

Dylan: If you would have told me that Adrian Beltre would be a Rangers past the July 31st trade deadline a month ago, I would’ve assumed he had been injured or you were lying.  If you’ve been following the team and its beat reporters lately, however, it wasn’t a huge surprise that he wasn’t dealt today.  The page hasn’t completely turned on him possibly being dealt if he were to pass through waivers and be dealt sometime in August, but Beltre seems to be committed to finishing his career a Ranger.

Adrian Beltre says he’s unsure whether he wants to play past this season, but rest of his career will be spent with the #Rangers

Who is the player that was traded this month that has the potential to haunt the Rangers the most with future success?

Garrett: I do like that Texas only traded its pieces to National League teams, so they won’t have a chance to hurt the team in its immediate future. However, I wasn’t a huge fan about moving Kela for a few reasons: he’s only 24, and under team control for two years. It might’ve been a better course of action to hang on to him for one more season, let him develop over the offseason and Spring Training, and evaluate his future next year. I always thought Kela would be a great way for the organization to avenge what it did to its last young closer with potential (Neftali Feliz, who flamed out of the MLB after Texas attempted to convert him to a starting pitcher in 2012), and have a firm, young option to finish games down the stretch.

Dylan: I really don’t think anyone the Rangers traded would have been a vital piece to the next Rangers team to be in playoff contention (Whenever that will be).  If I had to pick one, I’d agree with Garrett and say Keone Kela.  He had truly become one of the most enjoyable players to watch for the Rangers this season.  Once a fastball or nothing pitcher, his work on his breaking pitch has paid off as it fooled plenty of hitters in the 9th inning this season.  However, the bullpen is a year to year thing and you just never know when someone will completely fall off into an unrecognizable mess (see Sam Dyson or Shawn Tolleson, Rangers fans).  It was an understandable decision to sell high now.

On the flip side, who is the player the Rangers will be happiest they held onto at this deadline when they look back on it in a year or two?

Garrett: No doubt, it’s Jose Leclerc. The proverbial ball is in his court for the keys to the back of the Ranger bullpen. He’ll turn 25 in December, but has already developed into a solid, late-inning reliever, sporting a 2.27 ERA and 15 holds in 2018. The rumor mill was churning on him along with Kela, but the Rangers made the right decision to keep him. Expect Leclerc and Alex Claudio combing to finish off games for the Rangers the rest of this season and beyond.

Dylan: Optimistically and probably foolishly, I say its Joey Gallo.  The trade rumors started late and were brief with him, but I would bet my life the Rangers at least felt out how other teams felt about the struggling slugger.  Despite the .190 batting average, the 24-year-old still has mashed 26 homers with two months to go in 2018 and has flashed defensive potential at each of the positions manager Jeff Banister has penciled him in at this season.  We’re almost finished with our second full season of Gallo and he is yet to come even close to putting it all together.  However, I still think he has the most upside of any of the Rangers’ everyday 25-or-younger starters.

Is there a player who remained on the team through the deadline that you think will be dealt before the start of next season?

Garrett: Mike Minor was a name that was tossed around in trade discussions throughout the last few weeks, partially because of how well he’s been pitching since May- boasting a 3.56 ERA since that point. He’s proven he can be a serviceable starter after a lengthy injury recovery time prior to 2017, and serving strictly as a reliever for the Royals then. He’s a true candidate for the less common August waiver trade, and for teams such as Oakland, who need starting pitching help and missed out at the deadline, seems like a great option. The main obstacle would be the $18 million remaining on his contract over the next two seasons.

Dylan: Jurickson Profar showing that he is capable of being a slightly above average major league player ought to be enough to lure a team to approach the Rangers with a serious offer for him this winter.  His arm has seemed a little iffy from both shortstop and third base this season, but if a team committed to playing him at one of those positions full time, he’s also flashed enough potential with the glove to make me think he could be a very capable starter for most teams in baseball.  I’d like to think he is the everyday starting third baseman for Texas in 2019, but there’s a future Hall of Famer who will get that nod simply by saying he wants it.

Without pretending to be an expert on lower-level prospects, what do you think of the players received in all of these trades?

Garrett: I’ve heard really good things about Taylor Hearn, the return from the Kela trade to Pittsburgh. He’s a native of Royse City, Texas, some 50 miles East of Globe Life Park, and put up great numbers so far this season (3-6, 3.12 ERA at Double-A Altoona). I wouldn’t be surprised if he’s placed on the 40-man roster and called up in September for some low-leverage relief appearances.

A less popular pick is Tyler Thomas, the return from arguably the most under-the-radar July trade, Texas sending reliever Jesse Chavez to the Cubs. Thomas is a developed left-hander putting up good numbers at Single-A this season.

Dylan: I love that they’re essentially all pitchers.  This organization is desperate for long-term, affordable, controllable pitching at the major league level and hopefully just by the odds of pure number of guys they’ve acquired this month via trade and through June’s draft, they’ve added some capable arms to their system.  On the offensive side, they have a ton of young talent under team control for several seasons and some highly rated prospects in the pipeline, so the lack of emphasis on those types of players in these deals does not bother me.

I’m also excited by Taylor Hearns.  Especially since he is a DFW native and also appears to be a big Mavs fan since he has #MFFL in his Twitter bio and one of his most recent tweets is a retweet of Dirk Nowitzki.  If you love the Big German, you’re going to be a good player to me.

While the final two months of this Texas Rangers season won’t catch the attention of the average sports fan, there is plenty to pique the interests of fans eager to see young players earning their future spots and perhaps some of the assets acquired this month making an impact on the big league club.

While no one thinks this year’s sellers deadline for the Texas will have the same impact as the one in 2007, maybe Jon Daniels and the rest of the front office has a little more up their sleeve than most realize.