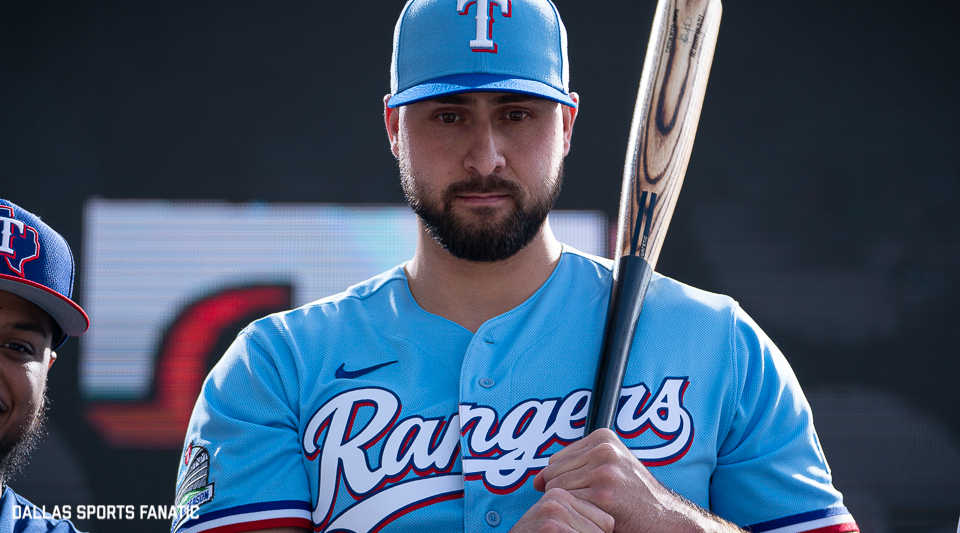 As the Rangers get ready to walk into a new era in 2020 with a new ballpark and possibly some splashy new players, the team will be rolling out a new look as well.

While the overall look remains similar, some major differences are instantly noticeable.  Whether it’s the powder blue color, the new “Rangers” script on the front of the home jerseys or the change to the logo on the red hats, the subtle differences all make a big difference. Our staff assembled to give our takes on the new threads for 2020.

What is your favorite aspect of the new uniforms?
Alex: The home uniforms look pretty good. I do like the “Rangers” scripting, although I always thought teams should only use white and grey should if both teams have the same color scheme. Therefore, white is okay. I do like the baby blue uniform, and I think it’ll be just as popular as when the Rangers brought out the red uniforms. I believe in the future; the Rangers will start using that more often like the Tampa Bay Rays do since it fits within the Rangers color scheme. I joked to Chris Woodward on the “Globe Life Field Inaugural Patch,” saying that maybe next season, the team will replace that patch with a ring on there (inferring a World Series ring). I do like the patch on the sleeve, too, and the socks are good though I’m not a baseball-sock lover.

Darien: I believe they’re magical in more ways than they aren’t. The new style scripted uniforms, that read “Rangers” are beautiful and easily my new favorites. Also, the fact that they added the red, white and blue stripe on the sleeves and down the sides of the pants. They look really sharp without doing too much which is what I wish other teams in the Metroplex would take note of. Beyond that, the fact that they are now Nike adds that special touch to me.

Garrett: I was extremely nervous when I heard the Rangers were unveiling new jerseys. Perhaps the most “old man” thing about me is that I don’t like it when teams change their jerseys every year. I like continuity. The new Mavericks jerseys are awful. I can’t stand it that each team gets a new set every year in the NBA. As a result, I was really happy they held on to the traditional road grey, blue alternate, and road blue jerseys. The “Rangers” in script across the chest is interesting. The team hasn’t had Rangers across the chest since 2008. Most teams have the team name on the front of home jerseys. I like that they did that to distinguish these from the road sets. But the continuity of at least three uniforms is my favorite part.

What aspect of the old uniforms are you happy they kept around?
Alex: I do like that the Rangers red is still around in addition to the Rangers blue. I believe that having the “Texas” scripting for the road works well too and not changing that to the “Rangers” script. I kind of like that the team is keeping the same primary logo and not changing it to the “TX inside the state of Texas.” Although I think that would be cool to change, it probably wouldn’t be for the best.

Darien: I enjoy that there are five different uniforms to choose from on a day-to-day basis. They only added a few new ones with the script that I mentioned earlier. They still have red, blue and grey uniforms that just read “Texas” and that’s what I love. I’m thrilled they did not omit those from the lineup. They all kept that clean look and that’s what I appreciate most of all.

Garrett: The Texas flag on the left shoulder patch is one of the most unique things about the Rangers uniforms and I’m glad those are back. I’m also glad they kept the traditional block T caps, because I’m not crazy about the “TX” over the state silhouette.

How would you rank the three jerseys with the most change/are completely new?
Alex: 1. Powder Blue 2. Red 3. White

Be sure to check out our photo gallery of photos from today’s event unveiling the new uniforms.