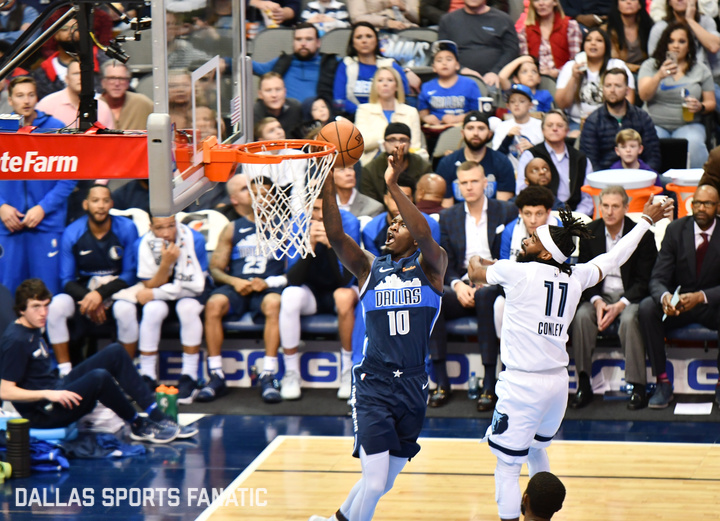 Could Mavs season sink or swim based on their level of play from the wings?

Could Mavs season sink or swim based on their level of play from the wings?

Things don’t always go as glamorously as the Mavericks or their fans would hope once the calendar turns to July and the “wining and dining” of the modern NBA free agent can legally begin.  What seemed to be so confusing about this summer’s escapades was that there was seemingly not even as much effort from Dallas to get out and try to find that sexy, star-level match for their team.  Instead on June 30th, the Dallas brass was making trades fall apart before they were even done and having dinner to celebrate the resigning of Kristaps Porzingis.  That can’t leave too good of a taste in the mouth of anyone too close to the team.

Before the likely five figure dinner check arrived near the wealthy and powerful palm of Mark Cuban, valuable sharp shooters on the wing like Khris Middleton, Bojan Bogdanovic and Tobias Harris had already agreed to sign with teams.  While Dallas did pursue veteran Danny Green all the way until he signed with the Los Angeles Lakers at like 2 AM after the Kawhi Leonard and Paul George moves to the Clippers, the wings to work with on the roster will more-or-less stay the same for RicK Carlisle from the 2018-2019 season.

Make no mistake about it, the Mavericks are looking for two pretty simple things from this spot this season: quality perimeter defense and floor-spacing shooting from beyond the arc.  These are keys to both masking the weaknesses and unleashing the powers of superstar creator Luka Doncic.

Guys like Courtney Lee and Tim Hardaway, Jr. were the tax for acquiring Kristaps Porzingis but could conceivably take up a chunk of the Mavs minutes at the SG/SF spots this season.  It seems obvious that Lee’s best days are behind him as the career 39% three point shooter shot just 29% from deep in 34 games between the Mavericks and Knicks last season.  Sporadic playing time couldn’t have helped the veteran and neither could every single one of you on Twitter trying to figure out how to include him in a trade for more cap space this summer. The man has a family, you guys.

While the 18 points per game for Tim Hardaway, Jr. look nice to the casual fan, anyone who watched Mavericks basketball down the stretch last season knows not to get too excited about what this guy brings to the table at this time in his career: low-efficiency, high-volume shooting. That better change this season if he wants to be anything more than a high-priced guy at the end of the bench.

With Dallas aspiring to get back to the playoffs for the first time since the 2015-2016 season, they can’t afford to have someone taking over 14 shots a game and hitting just 40% of them overall like he did in 19 games for Dallas last season.  He started 17 of 19 games and one can only hope that the message is clear to him heading into training camp: Your role is reduced and so are your shot attempts. Am I open to the idea of Hardaway, Jr. developing into a quality sixth man? I would love that, but again… he was just part of the tax for acquiring a player the caliber of Kristaps Porzingis when he was just 23-years-old.

New-dad Ryan Broekhoff has been enjoying a summer where the Mavericks did him a solid by not making a new father an unemployed man via exercising their right to not guarantee his $1.4 million salary for this season back on June 29th.  I can speak from experience, it’s always nice to have an income whenever there’s a kid depending on you to, you know, feed it and stuff.  The soon-to-be 29-year-old isn’t about to develop into Kyle Korver for the next ten years or anything, but “The Accountant” did show plenty of signs of being a worthwhile NBA player when Rick Carlisle called his number more frequently starting in January.

In 9 March games, Broekhoff averaged over 16 minutes per game and shot 48% from three.  Will there consistently be 15 minutes a game for Ryan Broekhoff this season with his limited athleticism and defense?  Probably not, but it is nice to know that he can be a high-quality teammate when he’s not playing and a high-efficiency shooter if given the chance.

Dorian Finney-Smith is someone who the Mavericks are now very familiar with and liked enough to give a three-year, $12 million contract this summer.  While that isn’t much in the modern NBA, it certainly is something to be proud of for the undrafted 26-year-old out of Florida.  While he shot a career high percentage from deep last year, it was just 31% for the season. Over the team’s first 20 games, DFS shot a very respectable and desired 38% from behind the line over the course of 76 attempts  Unfortunately, that clip dropped to just 28% over his final 61 games played last season on about three attempts per game. The way Finney-Smith earned a second NBA contract that will give him and his two young children a very comfortable lifestyle is by his constant energy and effort on the court and his positive attitude off of it.

Shoutout to Jimmy Crowther (@All_Things_Mavs) for the great Mavs content he produces.

To build off the energy and positive attitude of Finney-Smith, Justin Jackson is a natural follow up. The 24-year-old and 15th overall pick of the 2017 draft came over in the Harrison Barnes trade with the Sacramento Kings just before the deadline in February.  In my time around him in the locker room, he’s similar to Finney-Smith (their lockers were next to each other) in that he’s always willing to share a smile and a pleasant exchange.  It was apparent that the trade and move was a bit of a shock to him as he and his wife seemed pretty well-rooted in Sacramento with various charities and foundations they were involved with during their time there.  His minutes were spotty to begin his time in Dallas, playing more than 15 minutes just once in his first ten games after the trade.

His minutes began to creep up from there and his play improved.  By the time April had rolled around and Hardaway, Jr. was out of the lineup with a season-ending injury, Jackson was starting every game and being a key contributor for Dallas.  He averaged over 28 minutes per game in April and shot 48% from beyond the arc on 27 attempts.  How much can we take from Mavericks basketball this past April?  Besides Dirk Nowitzki’s unforgettable final home game on April 9th, there wasn’t anything special about the final six games of the season for Dallas.  They were frequently without Doncic as the team creatively found ways to keep his worn down legs out of a game.  Daryl Macon averaged close to 26 minutes per game in three appearances in April.  It was a weird time.

I’ve seen it speculated that Jackson could very well start in a Mavericks front court with Kristaps Porzingis and Dwight Powell.  While that may not be the biggest name for most Mavs fans, the idea of giving Jackson or Finney-Smith the opportunity to develop into a quality starter at their low price tag is something that should be explored.  With the salaries of Kristaps Porzingis and Tim Hardaway, Jr. set to take up about a third of the the team’s salary cap the next two seasons, Dallas will need to find bargains over the rest of the roster to make it work.  As it stands now, Jackson is signed for two more seasons and Finney-Smith for three at very tiny percentages of the cap. If you can hit on those spots, you have all the more money to fill holes elsewhere.

With Seth Curry and Delon Wright joining Doncic, Jalen Brunson and eventually J.J. Barea in the backcourt, the Mavericks don’t need a ball-dominant wing player to create his own shots.  They just need knock-down shooters who are prepared to get their nose dirty.  I think they have the personnel to fill that role brilliantly this season.