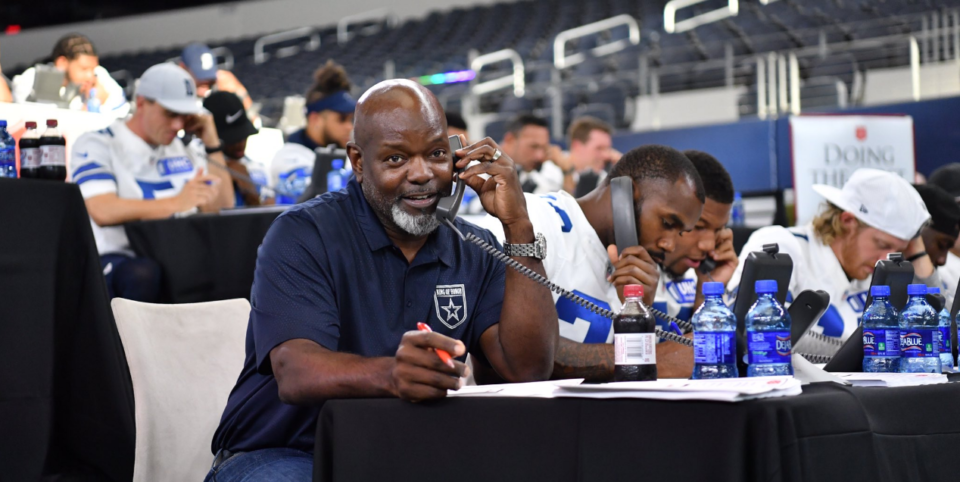 The Dallas Cowboys love their state and the people in it. Instead of playing their 4th preseason game last night, the Cowboys hosted a telethon for the Salvation Army for those victims of Hurricane Harvey. They were supposed to play the Houston Texans at AT&T Stadium Thursday, but the game was canceled so that Houston players could be with their family during this time of need. The original plan was that all the ticket sales would go towards the relief fund, but since the game got canceled, the guys suited up and took donations instead.

The telethon helped to raise over $2 million dollars for the relief fund. Included in that was a million dollar donation contributed by Cowboys owner Jerry Jones.

The Cowboys has a closed practice for the younger players while veteran and retired players took to the phones. Retired players who were present included Tony Dorsett, Emmitt Smith, and Michael Irvin.

Have you ever seen a ? use a phone? #Cowboys4Texas pic.twitter.com/ViICDOhe6C

In addition to hosting the telethon, the Cowboys also donated 30,000 pieces of apparel which was valued at $500,000, to The Salvation Army’s Adult Rehabilitation Center.

Dez Bryant reportedly rented two U-haul trucks and planned to filled them up at a Sam’s Club, and deliver his donation to the Salvation Army today. He has also donated $50,000 of his own money.

It is this showing of generosity and kindness that makes fans proud to call the Dallas Cowboys America’s Team.