On Wednesday night, the NBA released the upcoming schedule for the 2015-2016 season. We already know when the Dallas Cowboys are playing, and now that we know when our Dallas Mavericks are playing, we can really find some marquee can’t miss games to circle on our calendar for Dirk Nowitzki and company for this calendar year and the next. It’s time to take a look at my top 10 must watch match-ups.

The Debut of DeAndre Jordan vs Mark Cuban (Oct. 29)

This will be the home opener for the Los Angeles Clippers, but all eyes will be on how DeAndre Jordan handles his first encounter with the team he “verbally agreed” with for a matter of a couple of days. While Jordan has tried to sweep all of the drama under the rug, and Mavericks owner, Mark Cuban said you can’t do anything but move forward with the team, this will be the first opportunity for everyone to see how these games will look for the forseable future.

If you thought the showdown in Los Angeles was going to be fun, this is a true can’t miss match-up. MFFL’s everywhere heard prior to the schedule release that this game won’t fall on this date, and in true MFFL style, they will not disappoint. While Jordan is a Houston native, he is still a Texan. He will not feel like one on this night, and most likely ever again, following his indecision that sent him back to Los Angeles. While the Clippers have the better team on paper, and the Mavericks could still be without Chandler Parsons and Wes Matthews, this one will be epic.

I just had the pleasure of turning the big 3-0 8 days ago, and I must say, I’ve truly been blessed as a sports fan. I’ve had the pleasure of growing up in Chicago, and watching the greatest of all time in Michael Jordan. I have been able to watch every season Dirk Nowitzki has stepped on the floor, and I’ve also had the pleasure of watching Kobe Bryant. Whether you are a fan of Bryant or not, he is one of the all-time greats, and he will only be coming to Dallas one time this season, and while we aren’t sure if this will be his last season, his career is awfully close to coming to an end. You don’t want to miss this one. Plus, he has always had a knack for giving the Mavericks fits.

Parsons Return Back To Houston (Nov. 14)

We all know the history between Chandler Parsons and the Houston Rockets. He was unable to play the entire series last season, and many Dallas Mavericks fans claim the outcome could have been far more different if he had. The Rockets fan base jumped on Parsons every time he touched the ball, and given the fact that this series has turned into quite a rivalry, it always makes for some entertaining and hair pulling fun.

Nothing says wetting your appetite quite like some good hoops. We already have our Dallas Cowboys taking on the Carolina Panthers on Thanksgiving, so why not catch the Mavericks taking on Tim Duncan, Tony Parker, and Manu Ginobili in what could be their last go around together. The San Antonio Spurs figure to be a true championship contender this season, as they have added LaMarcus Aldridge and David West to the squad as well. Dirk Nowitzki. Tim Duncan. The match-ups between these two greats are coming to a close, so we would be foolish to turn our attention elsewhere. The Mavericks biggest free-agent splash of the summer will be heading back to Portland for his first game against his former squad. While he is happy to be in ‘Big D’, he wasn’t too fond of the fact that Portland never even received a contract offer from his team of 5 seasons.

“I was pissed off,” Matthews said. “I felt disrespected.”

While this could have something to do with the fact that Matthews went down to a very nasty achilles tendon rupture, the fact that he didn’t receive a phone call or even a text message spoke volumes to Matthews about his former team felt about him. A chip on the shoulder? I would say that sounds about right. 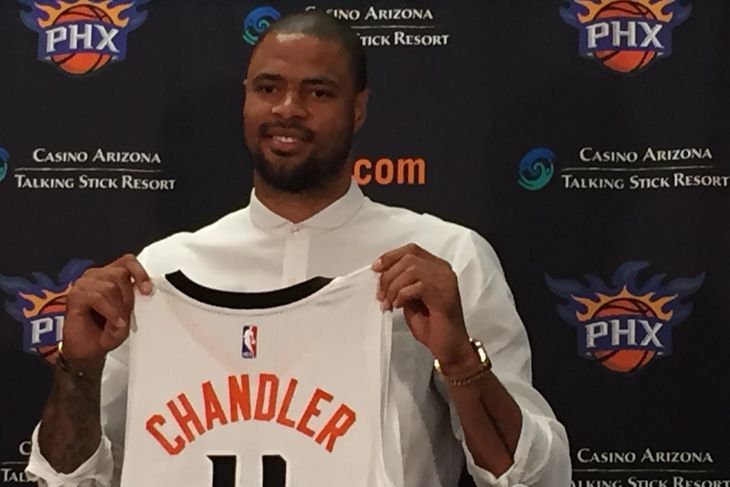 Tyson Chandler wasn’t going to wait around forever, while the Mavericks looked at DeAndre Jordan and LaMarcus Aldridge. When it came to the point like it looked as if the Mavericks were going in a different younger direction, Chandler signed a four-year, $52 million deal with the Phoenix Suns. It feels as if Chandler has been a part of the Mavericks family forever, but in reality, it was only two seasons. While it pains me to see him in that Phoenix orange, all of us MFFL’s will forever appreciate everything he did for this Mavericks organization. DeAndre may never want to step foot on the American Airlines Center floor, but that is one thing Chandler will never have to worry about. Welcome back Ty!

Stephen Curry and the Golden State Warriors capped off an incredible regular season with an NBA Championship, taking down LeBron James and the Cleveland Cavaliers to get the Larry O’Brien trophy. The Mavericks lost all four of their games with the Warriors last season. Regardless of whether or not the Mavericks can make a game out of this one, it’s my wife’s birthday, it’s the day before New Years Eve, and it’s Stephen Curry, Klay Thompson, Draymond Green and the run ‘n’ gun Golden State Warriors. Pure fun.

Mavericks Celebrate The New Year At The Scene Of The Crime (Jan. 1)

The Dallas Mavericks don’t play New Years Eve, so I figure a great team activity would be to turn on the old 2011 NBA Champions: Dallas Mavericks DVD, and relive some of the memories they had in Miami just 4 years ago. Sometimes a game just needs a little jump start to get you pumped up. The Mavericks-Heat series has definitely lost some of it’s luster from years ago, but nobody can argue how good it feels to see the Mavericks take the American Airlines Arena floor.

Boy, did he get our hopes up right Mavs fans? The Mavericks acquired Rajon Rondo last December in hopes of stabilizing the point guard position, and giving them a veteran who could play both ends of the floor. If only he showed the ability and willingness to get up the floor in 8-seconds or less. Rondo and Coach Rick Carlisle never saw eye to eye, and ultimately Rondo quit on the Mavericks in the 1st round series with the Rockets last season. Now he joins the Sacramento Kings. Yes, those Sacramento Kings. Rondo with DeMarcus Cousins, Rudy Gay, George Karl, and Vlade Divac? It’s safe to say I will be keeping an eye on this inevitable nightmare on NBA League Pass this season. NBA Hard Knocks anyone?