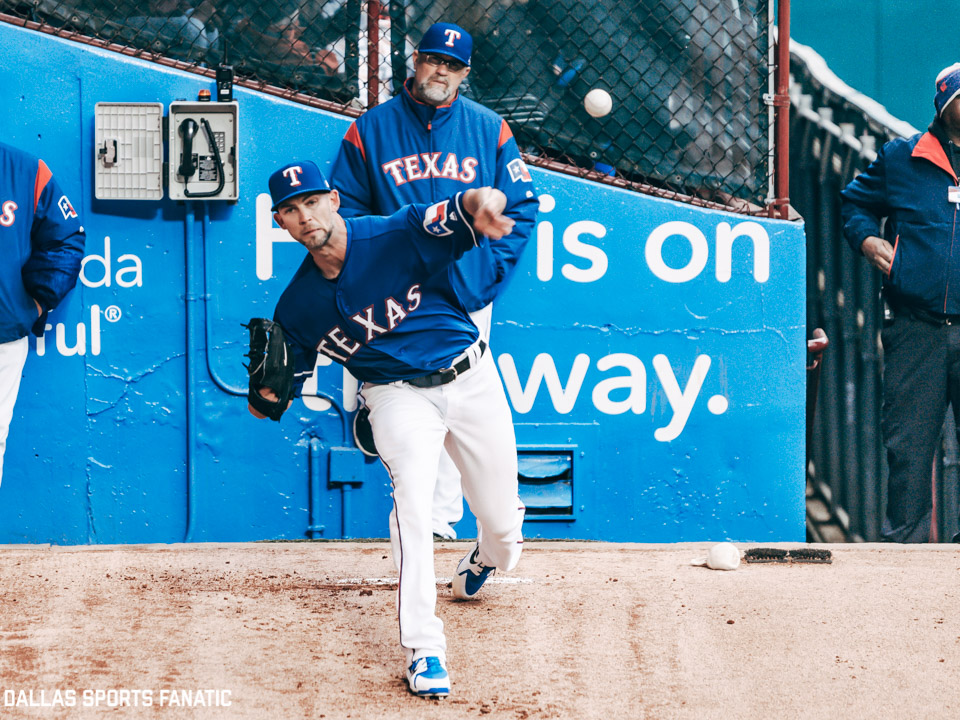 It has been a long fall, winter and early part of spring without regular season Rangers baseball.  The 2018 season ended for Texas way back on September 30th and a lot of time has passed since then.  In sports, time passing by equals lots of changes.  This squad is no exception to that theory.

Out: 2015 AL Manager of the Year Jeff Banister, future Hall of Famer Adrian Beltre, virtually all of the 2018 starting rotation and bullpen.
In: New first-time manager Chris Woodward, two-time All-Star Asdrubal Cabrera to replace Beltre at third base, a new set of starters behind Mike Minor, a new set of relievers leading up to Jose Leclerc in the bullpen.

After finishing with a 67-95 record in 2018 and not acquiring any All-Star caliber players in the offseason, the rebuilding Rangers aren’t garnering very high expectations from the media or the average fan.  In a year where their beloved home stadium will be hosting its own farewell tour and the team is trying to figure out which of its current players are worth being a part of their next push towards contention, there are plenty of interesting things to pay attention to when following Ranger baseball this season.

Our Rangers staff at Dallas Sports Fanatic is starting our second full season of Rangers coverage and can’t wait to bring you interesting articles and stories about the big league club in 2019.  Before the season starts, we must share our mandatory predictions about this year’s team.  Since you were asking for it, right?

What have been your impressions of Chris Woodward so far?
How does he compare to Jeff Banister in your eyes without
seeing him manage any regular games yet?
Alex: Listening to Chris Woodward’s somewhat new philosophy brings positives and negatives to the table. It feels like the “never ever quit” attitude that Banister brought. However, the main focus is on eyesight results and not stat sheet effects. In Spring Training, it works perfectly because the results on paper don’t make a lick of difference. Still, there will be times throughout this season that guys will struggle and press at the plate and on the mound. I see this new philosophy of lifting mental pressure backfiring at times which will cause slumps to extend. The viewpoint is similar to Banister’s style. However, the difference in this outlook is the new school type of technology used by the organization. Woody is a rookie manager, therefore he’ll make mistakes. Still, the players look like they’ve responded this spring.
Garrett: In a game against Kansas City last week, Woodward did a television interview with the Rangers broadcast crew from the dugout. I came away impressed. It’s hard to pinpoint, but his enthusiasm for a meaningless game was evident. He rooted his players up and down the line, critiqued his pitchers passionately- and did so in the middle of this interview. He was also extremely confident that the Rangers can win with this current group of talent- and particularly honed in on his confidence surrounding Rougned Odor. That’s a good sign for Texas fans.
Dylan: Chris Woodward has passed every eyeball and ear…hole test so far.  He frequently flashes a genuine smile during interviews and seems to always be able to say something that I can support.  Jeff Banister rarely flashed a smile and just seemed like an old-school guy in a new-school era of baseball.  I love Woodward’s baseball story since he was able to fight and struggle to keep himself in the majors for well over a decade.  He’ll have a great message for these young Rangers who are fighting to find their way in the highest level of professional baseball.
What is the area of the 2019 Rangers roster you feel the best about and why?
Evan: Heading into the 2019 season, I feel the best about the team’s outfield. The Rangers have plenty of youthful depth with Joey Gallo, Nomar Mazara and Delino DeShields. I’m optimistic that having a veteran presence with tenured players such as Hunter Pence and Shin-Soo Choo should serve the Rangers’ outfield well in terms of both mentorship and players getting rest.
Garrett: I’m pretty confident in the back of the bullpen, simply because I think Jose Leclerc is the most underrated reliever in baseball. He was at a lock-down level when he settled into that role last year, and took the spring to develop his game. I’m looking for a big year out of him.
Alex: The Rangers’ chemistry is what brings the best out of this team.  These days, chemistry is a lost cause that can backfire on a team.  For a club that is in a rebuild, team camaraderie is a difficult thing to create.  Players spend nearly every day for seven months together and half of that time is on the road in multiple cities and hotel rooms.  When looking at a team’s success, it’s something that gets lost in all sports.

The offense. New hitting coach Luis Ortiz has been working a lot with the hitters and I’ve noticed a lot of improvement. Especially with DeShield’s and Odor’s approach at the plate.

Which part of the roster do you feel the worst about and why?
Unanimous: the starting rotation.

Garrett: If the injury history of the players in the Rangers rotation holds to form, look out. This experiment could crash and burn very quickly. If each player performs to his peak ability, it’ll be one of the more underrated rotations in baseball. If they get hurt early and Texas is forced to trot out underdeveloped arms like Johnathan Hernandez and/or Adrian Sampson, it could get ugly fast. Not to bash those players- they’re just not on the Major League roster for a reason; not ready for it yet.

Mike Minor, Lance Lynn, Edinson Volquez, Drew Smyly and Shelby Miller.  Who all is still on the team after July 31st?

Dylan: I’m confident that both Minor and Lynn will still be on this team at the end of this season since they have contracts that go beyond 2019.  I would love to think that all three of Smyly, Volquez and Miller play well enough to warrant trading them on their expiring deals.  Will all three even make it to the deadline without suffering a season-ending injury?  Of course, I’d never root for anything like that, it just seems likely that at least one of them will have an injury resurface.  That being said, I’ll say just Minor, Lynn and I guess Miller since I think he will flash signs of brilliance but will be on the injured list a time or two to scare away suitors.
Darien: Man, this question is going to be the one for the year. I think all of these guys could possibly be dealing with lingering injuries at any point throughout the season. Therefore, I can’t accurately answer who will still be on the roster by that point or not. It may be more worth the time to call up minor leaguers to get them some time on the mound in the big league. To answer the question, I know Minor and Lynn aren’t going anywhere. The others – we will just have to wait and see.
Alex: Now that there is no waiver trade deadline (MLB removed the August waiver trade deadline beginning this season), the Rangers will look at a more aggressive approach come July.  I believe that three of those give guys will be in other uniforms come August 1st.  Now assuming none of them get hurt, the Rangers will likely hang on to Shelby Miller and Drew Smyly.  They will proceed to shop Minor to other clubs, Lance Lynn is a proven veteran, and they may receive a small trade package back for Edinson Volquez (not much, but perhaps a minor leaguer.
Who will lead the Rangers in innings pitched if it’s NOT Mike Minor?

Alex: Shelby Miller is a candidate that can step into a second-half ace for this club.  That being said, his 2019 won’t have ace-like numbers and he may suffer a few setback injuries during the first half of the season.. The Rangers are confident that they can aid in bringing out the best in Miller this season.  I don’t think anyone on the club will reach the 157 inning mark (as Minor did in 2018), but out of all the Rangers pitchers, Miller will presumably be the closest candidate.
James: Matt Davidson. Just kidding, it’s Lance Lynn.
Who will be the Rangers All-Star(s?) this season?

Darien: The Rangers all-star will be from the bullpen. Much like last year, the position player lineup from the AL all-stars will be too tough to compete with. I could easily see Leclerc slipping in as the Rangers lone represent. He possesses good stuff whether it’s in the closing role or if he comes in to relieve a guy for three innings. He’s an incredibly valuable asset to have on any ball club.
Garrett: I think this is Nomar Mazara’s breakout year. The writing has been on the wall for a couple years now. The foundation is set, and there’s no competition for his spot defensively or in the lineup. I think he’ll get the at-bats necessary to put up good offensive numbers, and likely batting before or directly after Joey Gallo will him them tremendously. Gallo, Andrus, Odor and Leclerc are other dark-horse candidates.
Position player most likely to be traded during the season?
Dylan: Asdrubal Cabrera was dealt from the floundering Mets to the aspiring-to-contend Phillies in July of last year, so I don’t see why the same couldn’t happen to him this year while he’s with Texas.  His modest one-year contract will make him much easier to move than Shin-Soo Choo and his salary north of $20 million in 2020.  Utility guys like Logan Forsythe, Patrick Wisdom and Matt Davidson could surely find adequate third base production between them for the final couple months of the season in the event that Cabrera is dealt midseason.
Alex: Matt Davidson and Hunter Pence may bring some eyes to other clubs, especially National League teams.  Depending on the new rule change on position players pitching, Davidson’s pitching could bring in a lot of eyes from contending National League teams.  I don’t project any of the Rangers everyday players (Mazara, Gallo, Cabrera, Choo) getting dealt unless some team makes a ridiculous offer, but the Rangers should be very busy come July.
Projected win-loss record for 2019?
Dylan: 75-87
Alex: 76-86
Garrett: 73-89
Darien: 74-88
Evan: 65-97
James: 83-79

While the optimism of Opening Day is unmatched, you see that our staff doesn’t exactly have glory days projected for the Texas Rangers in 2019.  Even though the wins might not stack up at a postseason level, it should still be an interesting year out in Arlington for this franchise as they build towards a future with a shiny new stadium and a fanbase eager to get back to postseason success that rewarded and ridiculed them at the beginning of this decade.

Whether you’re ready or not, it is baseball time in Texas.