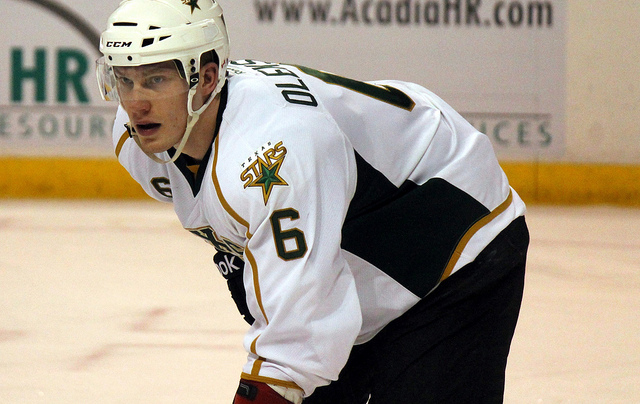 The Dallas Stars continue searching this off-season for the winning formula to fix their defense, recently re-signing defenseman Jamie Oleksiak, 24,  to a one year deal worth approximately $964,000.

Defensively the Stars where shredded last season; they had the NHL’s second-highest goals-against average (3.17), behind the Avalanche  (3.37).

With the re-signing, the Stars appear to be placing some hope that their defensive woes will end and that the 24-year-old Oleksiak may finally be ready for a full, strong year this season. He started his career in Dallas, being selected in the first round (14th overall) of the 2011 NHL Draft. In 41 regular season games for the Stars during the 2016-17 season, he had 7 points.  2016-17. His five goals marked a career-high and were third amongst Stars defensemen.

He has appeared in 119 regular-season contests over the past five years, all with Dallas, and has 19 career points (6-13=19).  After a couple of years with the Texas Stars of the American Hockey League, he was called up by the Stars in January of 2013.

Oleksiak scored his first career NHL goal against the St. Louis Blues in a 4-3 loss  in October of 2014. He’d finish the season with 8 points in 36 games. During his first full season with Dallas healthy scratches and a hand injury limited Oleksiak to 41 games.

He will get the chance come September training camp to see if he can indeed be a part of the formula to fix the Stars’ defensive woes and get back to winning form.