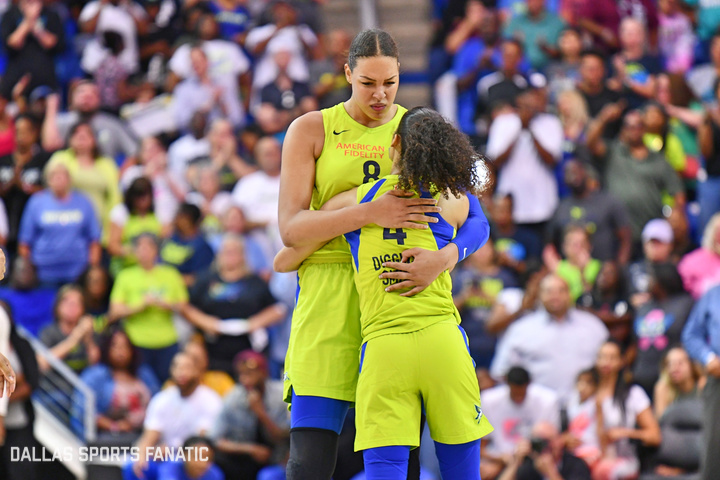 It was the Liz Cambage show as the All-Star recorded an impressive 43 points, 13 rebounds in the playoff-clinching win.

“It’s days like this on my birthday I miss my family a lot. I’m an only child and it’s always been family first for me. It’s not easy for me to be alone on the other side of the world. I’m lucky to have such a great team who are like sisters to me.”

all I wanted for my birthday was to make the WNBA playoffs for the first time in my life, thank you to my @DallasWings family. dreams do come true 💚💙

Cambage has been vocal about her reasons for being noncommittal to the WNBA, the loudest being about officiating and compensation. Her past battles with depression and anxiety also factor into her decision to truly prioritize herself moving forward.

The Wings earned their first win since July 19, shaking off a nine-game losing streak that saw the departure of head coach Fred Williams. Assistant coach Taj McWilliams-Franklin stepped up as interim coach and received a warm ovation before earning her first win as head coach.

The Dallas Wings showed up with a kind of heart and fight that we haven’t seen a while.

An emotional Cambage and Skylar Diggins-Smith left it all on the court and were transparent in letting fans know just how much this win means at a time like this. The dynamic duo shared a post-game moment as they hugged it out in celebration.

Diggins-Smith ended the night with 23 points, eight assists, but her contribution to the Wing’s win goes beyond these numbers. The Wings have a powerful, fearless leader in Diggins-Smith and last night served as a reminder of the Wing’s bright future even with the possibility of losing Cambage.

The Wings will play one more regular season game against the Storm Sunday night and then prepare for the WNBA Playoffs which begin August 21st.