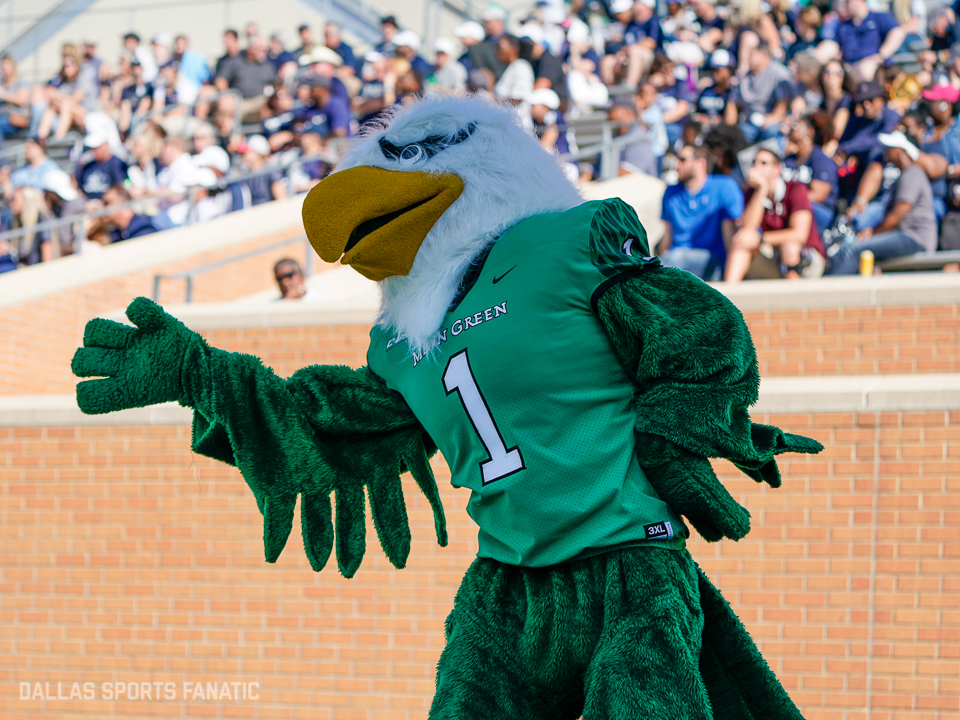 On a cold and rainy day at Apogee Stadium, the Mean Green got back on a win streak as they defeat the University of Southern Miss 30-7 Saturday afternoon in Denton, TX.

The game started out with a defensive showdown between the two teams, as both teams struggled to get anything going offensively. That all changed early in the second quarter when UNT quarterback Mason Fine scrambled to avoid the pass rush and found receiver Jalen Guyton alone for a 53-yard touchdown catch to put the Mean Green up 7-0.

The Golden Eagles would respond in kind with quarterback Jack Abraham hitting his top target in Quez Watkins for a 44-yard touchdown catch in which he shredded through multiple tackles as he strolled into the end zone tying the game at 7.

After that, both offenses went back to being dormant once again.  The first half ended with both teams turning the ball over right after each other.  Though the Mean Green got the ball with 30 seconds left, in the end UNT settled for a 10-7 lead going into the half.

The third quarter was much more of the same with both offenses unable to complete drives down the stretch.  Yet, with 4:03 left in the quarter, Mason Fine would engineer a successful drive hitting Mitchell Lawrence and Rico Bussey Jr. to put them inside the Golden Eagles’ 20-yard line. Then the running came alive as running back Nic Smith would get inside the 6-yard line before fellow running back DeAndre Torrey ran it in for a 6-yard touchdown run to put the Mean Green up 16-7 going into the fourth.

While the Mean Green offense started to heat up, their defense was making life tough for the Southern Miss offense. Constant pressure and timely turnovers helped the defense hold the Golden Eagles to just one touchdown throughout the game.  Linebacker E.J. Ejiya, who led the team with two sacks and 12 total tackles, said that coming into this game the defense was very confident.

“We wanted to make them one dimensional,” Ejiya said. “We were really confident coming into this game that we could compete and beat them.”

“The guys came back to work this week after not playing well last week and did a good job of preparing the right way,” head coach Seth Littrell said. “We probably played the most complete game we’ve played in all three phases.”

Fine would finish the game with 292 yard passing and just one touchdown with a fumble lost. Guyton caught 7 passes for 124 yards with a touchdown. Torrey rushed for 100 yards on 17 carries and three touchdowns.  Smith ran for 40 yards on 7 carries.

Fine, who would break the UNT record for most completions, was pleased with the performance tonight but acknowledged that the offense needs to play better going forward.

“Offensively, we haven’t reached our full potential yet,” Fine said. “We’ve just got to keep working.”

The Mean Green will have a chance to keep improving next week as they go on the road to play the University of Alabama at Birmingham.  Kickoff is set for 6:30 p.m. CST and will be broadcast on the BEIN Sports network.