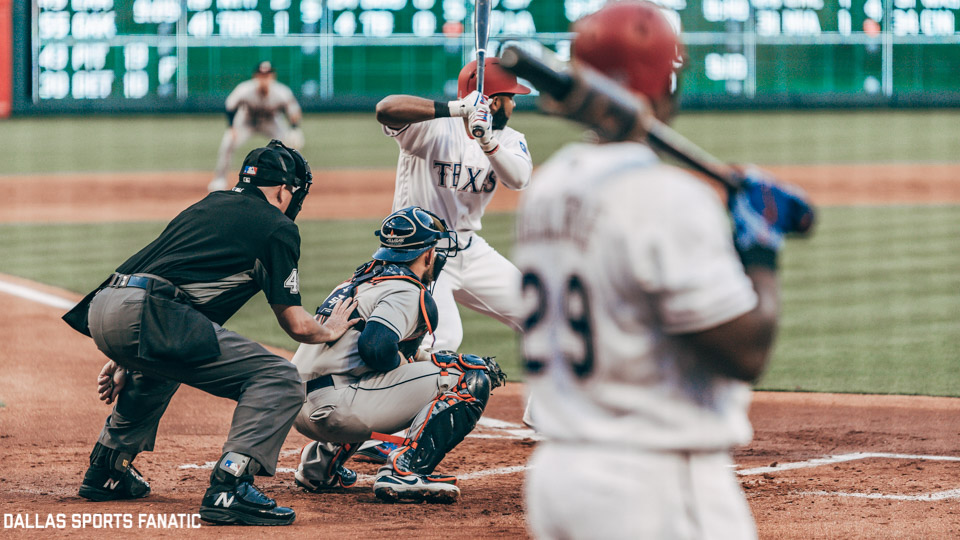 As we prepare to close the 2010’s, our Rangers staff at Dallas Sports Fanatic took the time to brainstorm and vote to determine the biggest moments of what turned out to be the most successful and memorable decade in franchise history.  From the highest of highs to the lowest of lows, we had to acknowledge it all.  It was truly a decade to remember.

Earlier this month, we reminisced about the day back in the summer of 2017 when Adrian Beltre picked up the 3,000th hit of his illustrious career. Today, I’ll take it upon myself to break down some of the other memorable moments from the decade. Most of these are good memories, but we inevitably have to acknowledge the bad. This isn’t the “best” moments of the decade, it’s a collection of the most defining moments of the decade. Moments that changed the legacies of players and the trajectory of the franchise.

Definitely a moment that stirred up social media just as much or more as any other moment on the list, I can remember where I was and how I reacted when this moment first happened in May 2016. Our own Rangers writer Alex Plinck broke down his thoughts/memories of this tantalizing moment.

“When the Bautista bat flip happened in Game 5 of the 2015 ALDS happened, I knew that the Rangers would counter with some retaliation in 2016 (to be fair, I didn’t have a problem with the flip). I also had a strong feeling that the Rangers would wait until Toronto came to Arlington if any funny business would happen. Throughout the game, I just waited to see if the Rangers would throw behind Bautista or if a ball would graze him on the jersey, but nothing happened until the eighth inning. When Matt Bush hit Bautista, I smirked, knowing that “there it was.”

Finally, when the replay showed Odor’s boxing haymaker to the left cheek of Joey Bats, my eyes lit up. I know from the moment that shot happened, it would go down in Texas Rangers history and possibly baseball history as the best-connected shot from a fist from an in-game brawl. Immediately, people started posting memes, making T-Shirts, and using that photo as their background cover (still do to this day). I didn’t quite like the “USA” chants by Rangers fans because most of the Blue Jays players aren’t even Canadian (let’s be real here); therefore, it didn’t make much sense. However, the crowd was electrified and also energized me from the TV screen. Overnight, “the punch heard around the world” became a moment that Rangers fans will never forget. I know I’ll always remember it.

Alternate moments to consider: Texas falling to Toronto in 2015 and 2016 divisional series

4. Adrian Beltre’s 3,000th hit
As mentioned before, we covered this in a previous separate post.

This single moment can really be stretched out to include any home game during the 2019 season.  One final year for Rangers fans to soak in the memories that housed the franchise during the 26 seasons where the team experienced far more success than it ever did at Arlington Stadium from 1972 to 1993.

While Texas never won a World Series in Arlington, there were still a ton of incredible moments in the stadium from Kenny Rogers’ perfect game in 1994, the teams first home playoff game in 1996, countless offensive explosions throughout the 2000s and of course memorable playoff moments throughout this decade.

I was fortunate enough to attend the final game at Globe Life Park with my son and brother back on September 29th. After attending so many games over the years with both, it was an emotional day to take in, for sure. Saying goodbye to the only home stadium I’ve ever know as a baseball fan is certainly tough, but I am beyond excited for the new barn across the street.

The true peak moment of euphoria this decade came early on for the Rangers fans. Texas made a big move in July for Cliff Lee and rode the momentum to their first AL West division title since 1999 when they clinched it in Oakland in September.  They clinched their first ever postseason series win in Tampa with a game five win on the back of a masterful performance from their big trade acquisition that summer.  Then finally in their first ALCS, Texas picked up big wins at Yankee Stadium to reach the opportunity to clinch their first AL pennant in front of their home fans in game six.

It was an incredible night as I can remember driving around honking my horn on the mostly empty roads and likely scaring random people driving by. Perhaps in the moment I was little naive about just how clueless to the Rangers’ status the Honda Civic passing me on Carrollton roads was on a random October night.  The fan buy in aspect of the Rangers rise and playoff run in 2010 and 2011 was truly the most communal experience I can remember as a DFW sports fan who became sports-conscious in the early 2000s.  More so than the Mavs playoff run in 2011 and more than any divisive/polarizing Cowboys season. I will never forget those two Octobers and of course the image of Neftali Feliz and Bengie Molina jumping into each other’s arms as the fireworks lit up the Arlington sky.

It hurts. It hurts so much. Over eight years later, I will still randomly remember this night and just shake my head in shame. One strike away. TWICE.

Whether we care to admit it or not, this is indisputably THE defining moment of the 2010s for the Texas Rangers.

Sorry I had to even remind you.

I cannot even emphasize how nauseating and gut-wrenching the few days after this game were for me as a human being. I was a college freshman at UNT and commuted back to North Dallas to watch the game with my brother at a sports bar and soak it all in with other Rangers fans. It almost worked out perfectly. Almost. I stood up the entire time the Rangers had two outs in the innings. I watched the ball off David Freese’s bat sail into right field. I watched Nelson Cruz drift back… then crashed to the dirty floor of Buffalo Joe’s in absolute shock and misery as a result of what I witnessed.  Of course, Texas would go back in front in extra innings and then lose the game on a walk-off homer by Freese later.  I distinctly remember my brother and I driving home in absolute silence out of a mix of anger and simply not knowing what to say. I dropped him off at home and then quickly got back into my car to begin my 20 mile drive back to Denton because I had classes the next day.  When my alarm went off the next morning, I couldn’t even face the world. I skipped my classes.

As the years go by, it’s pretty crazy that the actual game seven was just so forgettable in comparison to the choke of game six.

As far as the game’s long-term impact, the core of the 2010 and 2011 World Series teams was fractured after another tough end to the 2012 season where they lost a big lead in the AL West down the stretch and lost in the Wild Card game.  Gone were Josh Hamilton, Michael Young and C.J. Wilson, among others.  The next offseason Ian Kinsler was traded for Prince Fielder and Nelson Cruz left via free agency.

Life comes at you fast. One minute you’re making back-to-back World Series with a core that seems like it would want to be together for years to come and the next you’re winning just 67 games in 2014.

While the team rebounded in 2015 and 2016, they have been in rebuilding mode ever since and the 2011 World Series loss stings even more as an appearance in the Fall Classic seems far, far away from a legitimate possibility.

With a new decade set to get started in a new stadium with the likes of Joey Gallo and a strong pitching staff, things are looking up for the Rangers after a down few years. The 2010s were the best decade in the team’s history.  Here’s to the 2020s being even better.