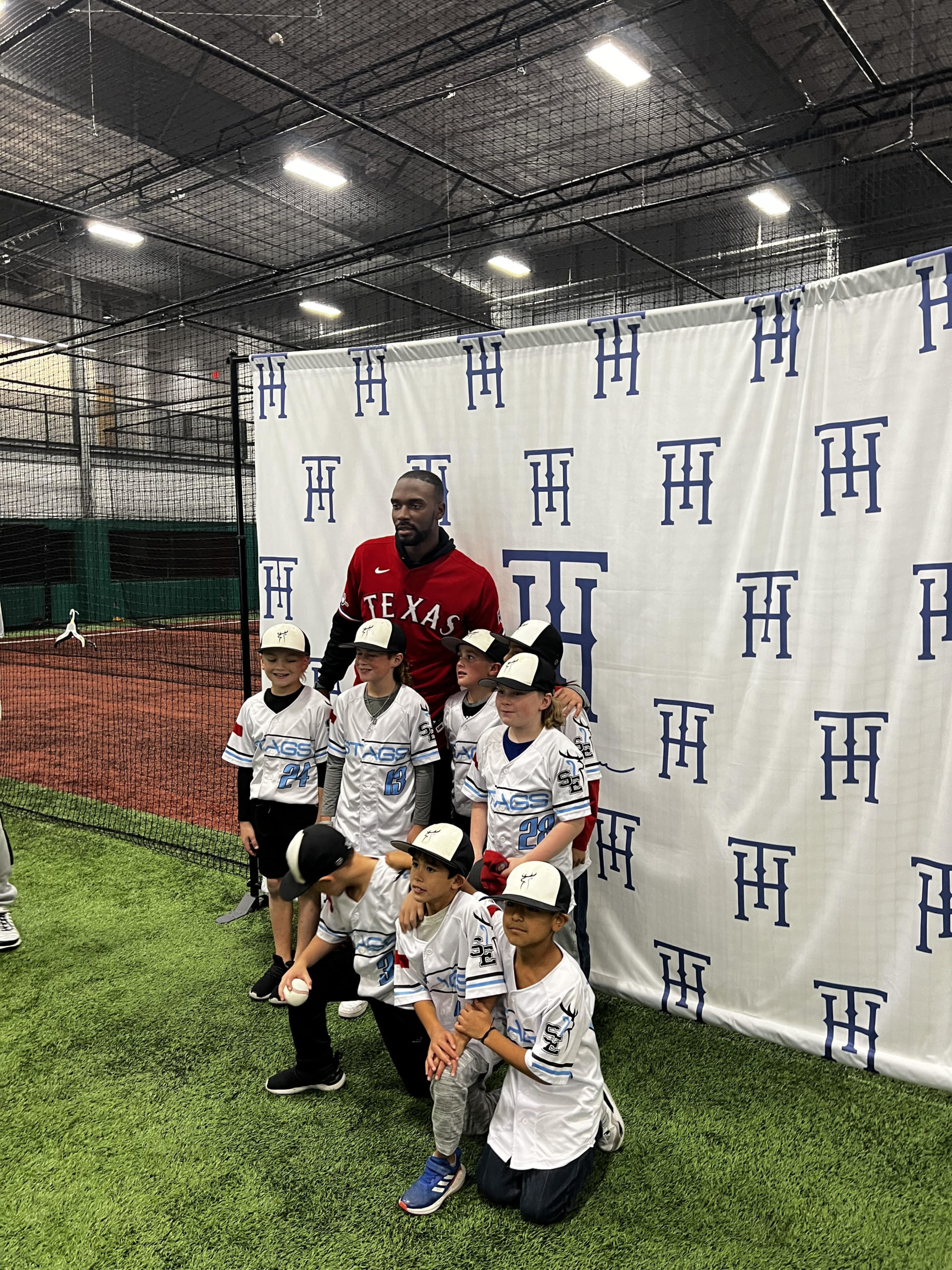 Despite Weather Obstacles, Rangers Taylor Hearn Made a Memorable Weekend for the Kids

Despite Weather Obstacles, Rangers Taylor Hearn Made a Memorable Weekend for the Kids

“I think Taylor [Hearn] and I realized there are multiple ways for kids to come together and have fun,” Play 24 Sports, L’Erin Hampton said. So, a couple of months ago, Taylor announced the “Taylor Hearn Woodbat Classic” that would take place in DeSoto. It’s a tournament featuring five different divisions (based on age groups) taking place between October 29th and 30th. The event also included surprise Texas Rangers teammates over two days. Then Mother Nature happened. The rain Friday caused fields to be unplayable, and the tournament was postponed. However, that didn’t stop Taylor, L’Erin, and the rest of the Play 24 Sports crew from adjusting to the circumstances and creating a recreational two days for kids to meet Rangers players and have fun. “It does suck that we didn’t get a chance to have the tournament at the fields, but we had a good turnout. A bunch of kids came out,” Taylor told me. “Overall, I had a lot of fun.”

I walked in Saturday early afternoon and saw AJ Alexy tossing to kids. Later, he swung the bat a few times and jogged around the bases. The interaction was wholesome, and the smiles on the kids’ faces meant everything. “I had a blast,” Alexy told me. “The next generation is important, especially in the game of baseball. Whatever I can do to make a smile on a kid’s face, I’ll do it.” Then, Jon Gray and Mark Mathias came by. Mathias was tossing to kids and interacting with Jon Gray, who gave pitching advice to a twelve-year-old kid for twenty minutes. “You spend so much time during the season stressed out about performing on the field, and then you come out to one of these events [and] it gives you a lot of perspective of like it’s all about having fun,” Mark Mathias told me. “I think kids can kind of get burned out putting them into tournaments all the time, but like, a day like this sets you back and makes you think what the game is all about,” Jon Gray said. “You’re having fun, enjoying your time outside [and] learning the game.”

In addition to that, Jon Gray was giving pitching advice to a 12 year old pitcher, Mark Mathias was going wind up and delivery, and Taylor Hearn said he threw about 150 pitches (including sliders and sinkers to kids.

The way Saturday and Sunday were structured was last minute, according to Hampton. The decision to move the venue to the Texas Rangers Youth Academy came the night before; therefore, everyone put things together in the wee hours of Saturday morning and Friday night with help from Taylor’s teammates. “We had everyone from the tournament show up, and I think they brought people with them,” L’Erin said. “The Rangers are fully behind him to do this. So we’ve come together and built something pretty special with the kids today [including] hitting blitz ball, autographs, [and] food trucks. We had a blast, but I’m excited. Despite the rain, everybody was able to come together and have a lot of fun.”

Taylor Hearn is the Rangers’ Roberto Clemente Award nominee, and it’s not difficult to understand why with all the work Taylor does in the community, something his teammates notice too. “[Taylor] cares about people. He loves his community [and] a big heart,” Gray said. Mathias added, “He’s a great guy. It’s more to life than baseball; providing encouragement and direction for these young kids is something that I’ve been supportive to, and we talked during the season about that. I told him I wanted to volunteer as much as possible for his events out here in Dallas.”

“It’s incredible what [Taylor does],” AJ said. “[He] goes out into our community, gives back to other people, [he’s a] selfless guy, and a great teammate. I’m glad to be a part of this.” For Taylor, it’s about idolizing himself after Roberto Clemente and Jackie Robinson. “It means a lot to be mentioned in that,” Taylor said about the Roberto Clemente nomination. “It’s never one of those things where it’s going to stop me from me from doing stuff with kids. Whatever team I’m on, I’m going to still do the same thing.” It’s not about just showing up for Taylor, it’s about his interactivity with the kids and on the event. “Taylor when he does something like this, is very hands on,” L’Erin Hampton said. “He’s very hands on [and] hes been doing a lot of work behind the scenes to make this thing special.”

The weekend took Taylor, his teammates, L’Erin, and even myself back to the old days of being a kid at the park and having fun. “Kids are hilarious. They make me laugh,” Jon Gray said, “I wish my youth were a little bit more like this because I think they got a little competitive early on. Everybody is just having fun, and it’s cool to see that. It’s a day full of positivity.” “You think about the times when you were little, and you came to camps, tournament ball, and all the stuff you went through. It’s good to give back,” Mathias said. AJ Alexy’s eyes lit up when asked about the weekend taking him back to his childhood. “Oh my gosh, yes. So many memories, and it’s awesome,” Alexy said. “When I was coming up, I didn’t ever hang out with any professional baseball players, and that’s something I wish I had the outlet to go and learn from,” Mark Mathias said.

I talked to L’Erin Hampton about that, too, and the two of us concluded that we didn’t get the chance to interact this much with baseball players. “It takes me back to just being a kid,” Hampton said. “When you play baseball just for fun, for the real reason you play. Having access to big league players and hitting BP against Taylor Hearn, getting pitching advice from Jon Gray. You got Marcus Semien fielding balls at second base. That’s what makes it so special to give to these kids. It’s not normal to be able to do stuff like this.”
I talked to Taylor Hearn about that, too, and the kid interaction is what he prides himself on too. “Getting to interact with the kids and how competitive they are in like blitz ball. They are really competitive when it comes to blitz ball, especially when they are facing a major league guy. They’re trying to take you yard, so it’s a lot of fun. Kudos to them.”

The weekend also features Rangers players like Josh Sborz, John King, Josh Smith, and Marcus Semien. All were interacting with the youth all weekend. Update: Play24Sports and Taylor Hearn have rescheduled the tournament to the “Taylor Hearn Turkey Trot Classic” happening between November 19th and 20th. You can find more information here. There’s one thing Taylor Hearn said, 2022 will be one of many tournament years. “This is something I’m going to do every year until I can’t walk anymore,” Hearn said. His arm may be tired this weekend, throwing 150 pitches along with sinkers and sliders, but Taylor’s heart continues to showcase throughout the Dallas/Fort Worth community.