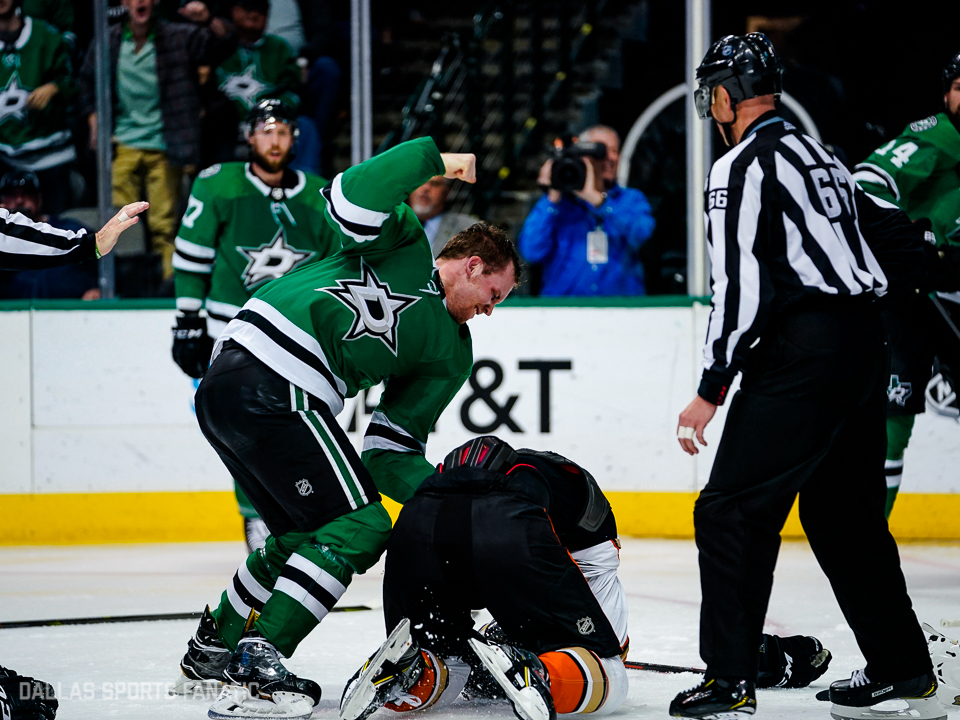 The Dallas Stars have had the Anaheim Ducks’ number this year.  In what was a very old time-y game with scraps and brawls galore, Jason Dickinson came up huge with two goals and an assist to lead the Stars into victory.

Dickinson started off the scoring after a turnover at the Ducks’ blue line, which he pounced on, and made a beautiful move to freeze net minder John  Gibson in place.  He went to his backhand and roofed it.  The goal was unassisted.

Shortly thereafter, the Captain of the Ducks Ryan Getzlaf, ripped one past Ben Bishop from the top of the circle on the left side, giving the right hander the ability to really lean into his shot.  The rocket shot silenced the crowd for the time being.

The Stars were not finished with their first period scoring just yet. Newcomer Roman Polak got his first goal as a Dallas Star, as he swooped in from the blue line down the boards, cutting towards the net, and lifted one on his backhand over Gibson’s glove.  It was a brilliant goal that about took the roof off of the building.  Polak’s goal was assisted by Dickinson, for his second point of the game, and Brett Ritchie.

A little over three minutes into the second period, none other than Ryan Getzlaf ripped home his second of the night to tie the game up.  Then in front of the net, Nick Ritchie wrapped his arms around Lindell and Esa responded by Cross Checking him.  Both got two minute penalties, and chaos ensued.

The madness had the building ruckus, as Cam Fowler grabbed Radek Faksa’s helmet.  Fowler swung him around a few times, while Faksa’s eyes pleaded at the refs as if to say, “do you see this?!”  After what seemed like a father giving his son the nod that, “it’s ok to hit him back,” Faksa began RAINING hay makers into the side of Fowler’s head.  The building erupted.

After the first round of pushing and shoving, refs regained control, dropping the puck to start a new play at center ice.  Mattias Janmark got an unsportsmanlike penalty call for a very light push on goalie John Gibson, and the American Airline Center let the refs hear it.  The penalty kill began, as Henrique won a faceoff against Tyler Seguin, however, Rickard Rakell gave up the puck.  Jamie Benn hit Tyler Seguin streaking down center ice towards the Ducks’ blue line, and the refs made somewhat of a make up call, as Fowler held Seguin, impeding his progress towards the net.

Miro Heiskanen got his first goal as a star, on a beautiful pass by Jason Spezza on a two on one.  Spezza looked at the goalie, but you could tell he wanted to set up the young Star for his first of his career.  After passing over the net minder, he saucer passed the puck over the defender’s stick, right on to Heiskanen’s stick, which he easily tapped home.

Mattias Janmark got a hard, crisp pass from Honka to put him on a breakaway, which he roofed over Gibson’s shoulder, putting the Star’s up 4-2.

Jason Dickinson wrapped up the scoring with his second goal of the night, late in the second period, putting the Stars up 5-2.

The Third period did not contain any scoring, as Bishop stood tall to maintain the lead.  The Ducks tried to fight back, but it was too little too late.

If Jason Spezza can continue with this level of consistency, and the Stars’ depth players continue helping out the big guys, the Stars can bounce back and do well this year.  It’s still early, and it appears that after juggling the lines a bit, head coach Jim Montgomery may have found some lines that work well together.  Adding Radulov and Johns back into the line up can only help, but it will be quite interesting to see who will be cut.

The Stars will take on the Red Wings, in Detroit, on Sunday at 4:00 PM.