After years of heated battles, Dirk Nowitzki will be able to breathe a little easier without the intense defense of Kevin Garnett. (Getty Images)

News came down Friday that future Hall of Famer Kevin Garnett was announcing his retirement after an illustrious 21 year career.

This comes roughly two months after another legendary big man called it quits after a close to two decade career.  Tim Duncan’s departure comes as a very bittersweet moment for Mavs fans.  A hated rival, but almost like that more successful big brother that pushes you to be better.

The most high-profile retirement this year came from the always polarizing Kobe Bryant.  The Black Mamba announced early on in the 2015-2016 season that he’d be retiring after the season and the remainder of the season was a Kobe Farewell Tour.

Between the three of them: 48 All Star game appearances, 4 league MVP awards, and 11 championship rings.

While those three pillars of NBA excellence are gone, there’s one player who will always be remembered when you mention those players still going strong: Dirk Nowitzki.

There’s no doubt that each member of the Garnett, Duncan and Bryant trio will be considered a better player than Nowitzki by the average fan and various members of the media.

Duncan’s quiet personality and “Big Fundamental” play style would make him about even with Nowitzki to the typical Joe Schmo if it weren’t for those five championship rings.

If you go over each player’s accomplishments, it’s unfair to immediately put Nowitzki below any of the three.

Duncan and Bryant: 5
Nowitzki and Garnett: 1 (… and counting? Let’s not get too crazy…)

Obviously Duncan and Bryant are above the fray when it comes to championship hardware, but my argument for the greatness of Dirk Nowitzki in comparison with these guys will go on.

What did these other guys have to work with the years they won it compared to the roster the Mavs had during their magical 2011 run? 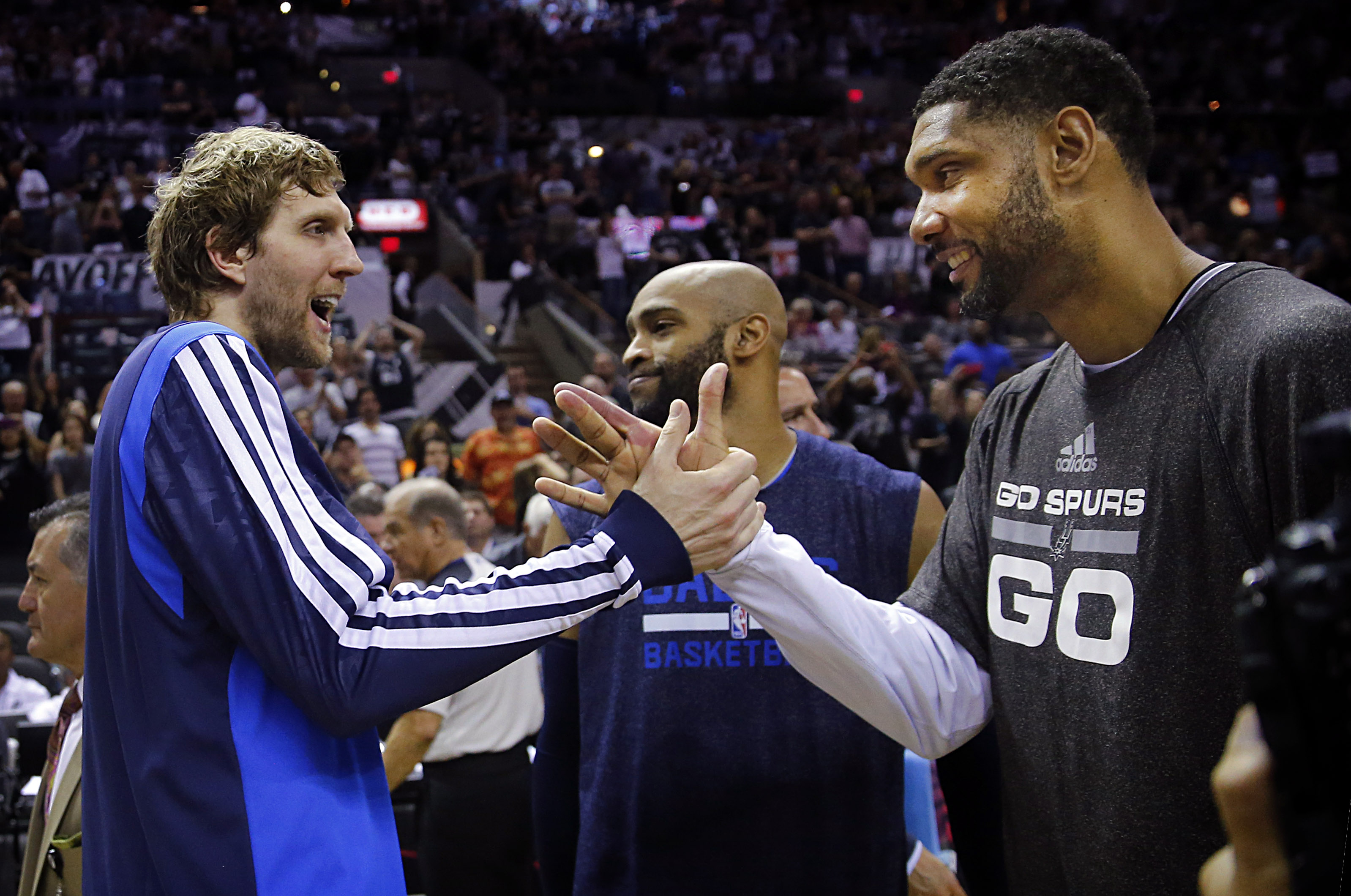 Life won’t be the same without seeing these two playing four times a year. (SportsDay DFW)

Championships without an All Star teammate on the roster

There are more ways to breakdown and compare these players, but these facts paint a favorable picture of Dirk compared to the three NBA legends who have retired this summer.

While the retirees have slowly faded away from the high level of play, each averaging their lowest minutes played/points per game averages of the century last season, Dirk Nowitzki continues to be the focal point of the Mavs offensive attack.  That should be no different this year.

The NBA will surely feel a bit different without the likes of Kobe Bryant’s deadly glare, Kevin Garnett’s intensity and Tim Duncan’s leadership for the unbreakable Spurs, but we’ll still have our franchise legend to root for.  With training camp beginning this week, let’s get pumped for another season of Dirk Nowitzki.