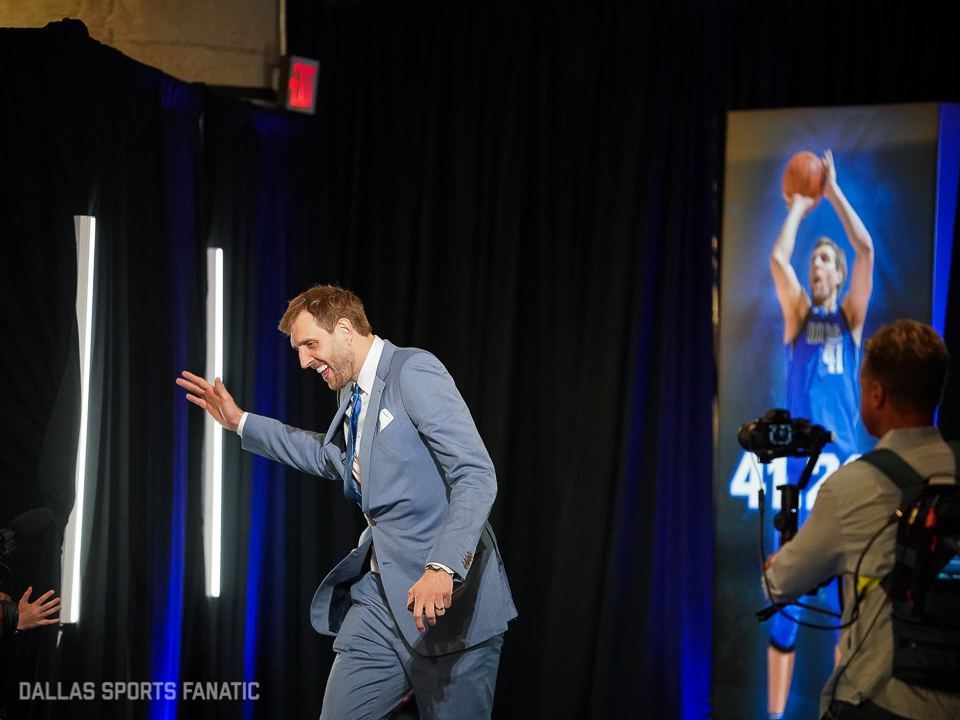 Dirk Nowitzki and Mavs fans: A once in a lifetime bond

Dirk Nowitzki and Mavs fans: A once in a lifetime bond

You never have a choice when it comes to saying goodbye to the things that matter most to you in life.  When it’s time to go, it’s time to go.  You just have to go along with it and appreciate the time you did have with that special place, time or being.

The emotions of Tuesday night’s home finale have been clear and predictable for months for Mavericks fans.  In a record-breaking twenty-first season where future Hall of Famer Dirk Nowitzki didn’t even check into a game until mid-December, it has been the sneaking suspicion around the NBA that this was likely his last season.

Personally, I’ve seen him limp in and out of the Mavericks locker room all season and wondered to myself how he was even going to play that night or the next one.  Somehow, Nowitzki managed to get himself out onto the court for most of the games since his season debut in Phoenix back in December. I had heard whispers, as most of us probably have, that Dirk was going to announce his retirement during the postgame ceremony the Mavericks put together for him after their home finale against the Phoenix Suns. I was prepared to hear what I didn’t want to hear.

That sure didn’t make hearing it straight from the man any easier.

"This was my last home game."

While there have been moments of doubt throughout this up and down season, Dirk finally let us off the hook during an emotional ceremony after the regular season home finale at the American Airlines Center on Tuesday night.

It was an incredible evening that was perfectly executed by the Mavericks.  MFFL’s crowded the stands to capacity comfortably before tip-off for this one and made it an electric atmosphere from the moment that the Mavs came out for pregame warmups until Nowitzki was cheered off the floor sometime after 10:30 PM.  It was an evening that most people didn’t want to end.  Not just because it was an incredible event to witness in person, but because it would signal the end of our time with the greatest athlete in the history of this storied sports city.

Dallas is Dirk as much as Dirk is Dallas.  When he came here as an awkward 20-year-old back in 1998, he was just a boy who happened to play basketball at a decently high level. Over the course of two decades as the face of a franchise and an iconic city, he’s become a man whose impact on the game of basketball will never be forgotten not only in DFW, but around the world. The type of love between the basketball world and Nowitzki isn’t something that’s lost on his current and former teammates.

“It’s every city we go to that he gets the most love,” forward Dorian Finney-Smith said of his teammate of three years. “It just shows you how great a player he was and how people like him as a person. I’m just blessed to have this opportunity to be his teammate.”

Nowitzki’s former teammate Nick Van Exel knows that Dallas doesn’t just love him because of his ability to produce on the court.

“When you bring a championship to a city and you’re the main guy, people are always going to love you . They’re going to love you even more when you’re a good, kind-hearted person who is giving back to the community and representing that city in the right way.”

Mavericks fans seem to have showered Dirk with more love than ever this season. Forget that he had his worst statistical season as a pro or that he would sometimes not play the entire second half of a game because the “matchups weren’t favorable.” There was a palpable buzz in the building each time he caught the ball, put up a shot or even just walked to the scorers table to check into the game. Mavericks fans took advantage of every chance they had to shower him with love this season and especially on Tuesday night. It was something that marveled his teammates as they had a front row seat to it night in and night out throughout the year.

“The appreciation is still there for all the work he’s put in,” Courtney Lee said recently. “Early on, Dirk was performing at a high level and giving all he had for the fans, now the fans are giving it all for him and sending him out the right way.”

Mavs fans truly gave their all for Dirk Nowitzki and it was beautiful.  Whether it was “M-V-P” or “We want Dirk” or “One more year” there was always a chant of support for this city’s sports hero throughout his goodbye performance of 30 points on Tuesday night.

Dirk with his first 30 point performance since 2016.

I don’t know Dallas Mavericks basketball without Dirk Nowitzki.  Frankly, I’m not too excited for when the time comes this fall that I’ll have to get acquainted with Mavs basketball without him.  Becoming basketball conscious like I did back in early 2001 as an 8-year-old, the first basketball player I ever got to call my favorite ended up being a top six all-time scorer in the history of the National Basketball Association.  How many people around the world can say that?  It’s only begun to hit me the last few years that I’ve been witnessing history and greatness each and every time I turn on the TV to watch Mavericks basketball.

I was five when the Mavericks acquired Dirk in that draft day deal with the Milwaukee Bucks back in June 1998.  Now that it’s all said and done, I’m able to say that my favorite player was with my favorite team from when I was five to when I was twenty-six. A lot can happen in that amount of time.

When I was learning multiplication and division in grade school, Dirk Nowitzki was the face of the Mavs.

When I went through the awkward stages of adolescence, Dirk Nowitzki was the face of the Mavs.

When I graduated high school, Dirk Nowitzki was just days away from winning NBA Finals MVP as the face of the Mavs.

When I graduated college, Dirk Nowitzki was the face of the Mavs.

When I got married nearly four years ago, Dirk Nowitzki was the face of the Mavs.

When I took my two children to their first NBA basketball games, Dirk Nowitzki was the face of the Mavs.

And when I was blessed with the opportunity to have a media credential at the American Airlines Center for the first time this season, Dirk Nowitzki was the face of the Mavs.

The man has been there leading this team through essentially all of the major events in my life so far.  I’m not the only one who can claim this, there is an entire generation of Mavs fans feeling the same way.  Probably hundreds of thousands of people around the world who grew up feeling the same way. It’s important that we realize one thing:

This people of this city will never be fortunate enough to have a player, athlete or even a person like this ever again.

There will be seven-footers who step on the court in a Mavs uniform after him, but none will change the game like he has with his outside shooting that is so mandatory for a big man’s game these days.

There will be athletes, not many, who spend a decade-plus with a team in the DFW area and perhaps bring a championship or more to the region, but none will make it to the immortal two decade mark like Nowitzki.

Most importantly, there will never be an athlete so committed to reaching the ultimate goals for this city.  That’s what makes Nowitzki’s tenure so admirable: he’s so committed to the city of Dallas.

We’ve been there for all of his growing moments just like he’s been a part of the Mavs during ours.  We’ve seen him go from drinking and having fun off the court with Steve Nash to embracing his new life as a loving father and husband.   When he was being labeled as “soft” and “irk Nowitzki”, it was the MFFL’s who kept supporting all the way until he hoisted the Larry O’Brien trophy on that center court platform in Miami back in June 2011.

Dirk Nowitzki’s basketball fairy tale will end where it began: as a member of the Dallas Mavericks. It will end with him being the focal point of the best era of basketball in this town’s history.  It will end with him leaving a legacy on a franchise that will last for decade.  It will end with him being fully aware of just how much we appreciate him thanks to the festivities of Tuesday night. Be thankful, Dallas.  I know I am.  In an age where there’s a superstar angling to make his way away from his franchise every summer, it’s more important than ever to appreciate and celebrate one who has been sporting your team’s jersey for the last twenty-one years.

They say you never know what you have until it’s gone.  If you didn’t already know, you better know this now: there will never be another Dirk Nowitzki.