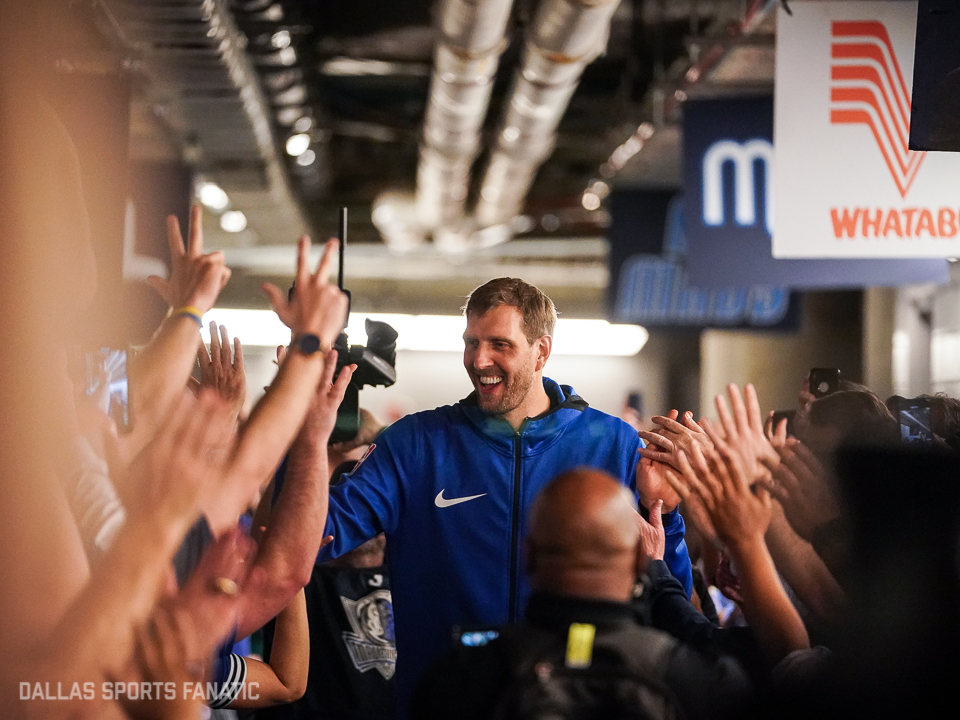 The day we all knew would eventually come is finally here. Dirk Nowitzki’s number 41 is going up into the rafters of the American Airlines Center.

It honestly could have happened back on April 9th, 2019 when he announced that night’s game against the Suns was going to be his final home game. Or it could have happened the first week of the next season. I suppose Mark Cuban and all involved were waiting for the perfect moment and obviously circumstances over the last 22 months have been anything besides perfect, so here we are doing this tonight. Once the house lights go down for the presentation after the game, all of the scary things happening around the world will be forgotten for a little bit. It will be time to celebrate Dirk Nowitzki. That’s something we can never do enough.

As a 29-year-old, I’m one of those DFW sports fans who can’t remember the Cowboy Super Bowls of the 90s or really claim to have known what was going on when the Stars won the Stanley Cup in 1999. I am so very fortunate enough to have become sports conscious right in time for the start of a magical run of dominance from Dirk Nowitzki and the Mavericks starting in the early 2000s. Being able to learn basketball and being what a fan is like while cheering on a team with Dirk Nowitzki as its best player is something quite special that I absolutely wish I appreciated more in the moment. I wish I could go back to being 12 years old, not caring about really anything besides my favorite sports teams and experience the joy I felt whenever “NUMBER 41, DIIIIIIIIIIIRRRRRRRRRK NOWITZKI!” was blared through the AAC speakers during the starting lineup introductions. It just doesn’t get any better than that when you’re that age.

So many of my favorite memories of my adolescence and early adult life center around Dirk Nowitzki and the Mavericks. Of course, Dirk was the Mavericks at that time. Watching the 2006 playoff run unfold with my family every few nights through the spring and early summer that year is something I’ll never forget — the good and the bad of that run. The hype around something like the Mavs/Suns regular season matchup in March 2007 was like a playoff game at the time and I’ll never forget watching it at home with one of my closest friends to this day. Then the 2011 Finals run came right towards the end of my senior year in high school. It was probably the most social time of my life, so I saw all of those games with so many different people. I got to share the magic of Dirk and the Mavs finally getting done with friends and family and it’s something I’ll always have in my heart and my mind until the day I’m no longer here.

As Dirk entered the latter stages of his career, I entered into marriage and fatherhood. Sharing Dirk with my wife and kids is like showing people your favorite show or playing them your favorite song for the first time. You’re so excited to see their reaction to the greatness, but they don’t really have the same appreciation for it as you do. It can be a bit disappointing at first, but that’s why you stick with it and help them understand the greatness they’re seeing. I’ve been especially successful at this with my five-year-old son who’s thankfully crazy about all sports like me. He was less than three when Dirk was playing his final games in a Mavericks uniform, but he is well aware of The Big German and asks me virtually anytime they show an image/highlight of Dirk on a Mavs broadcast, “Is Dirk Nah-bitz-kee still retired? Is he going to play again?” I wish I could tell him yes.

What’s going to be so incredible now is that anytime I take him to a Mavericks or Stars game in the future, he’ll be able to look up and see that number 41 hanging up. In the year 2025, 2035, 2045, whenever the team eventually moves to a new arena, whenever Luka Doncic possibly brings the team their next championship… whenever it may be. The number 41 will always be up there. Not just for hardcore sports fans, but even the people who are at the American Airlines Center to see, I don’t know… Doja Cat. As they’re killing time between the opener and the headliner, their eyes will eventually drift up to see the 2011 banner, the Stars’ 1999 banner, unfortunately a banner congratulating The Eagles for a bunch of sold out concerts, but also the incredible number 41.

Dirk Nowitzki has absolutely earned that. He will be in the mind of Dallas sports fans for the rest of time.

41 will truly be forever.