Dirk Nowitzki To Opt Out? No Chance

Dirk Nowitzki, forward of the Dallas Mavericks, joined the Ben and Skin Show on 105.3 The Fan yesterday to talk some hoops. A few comments caught the attention of MFFL’s everywhere:

Question: If Mavs had to rebuild again in an offseason, would you consider going somewhere else to pursue a ring?

Nowitzki: You know, that’s something I’ll focus on from summer to summer. I’m in the midst of chasing the playoffs here and trying to play well and compete every night. That’s something we’ll revisit this summer. Obviously I still have a year on the contract. I could choose to opt out. I think that’s in my contract. Honestly, I haven’t really spent a lot of thought on that at all. Like I said, I want to really make the playoffs bad. I think our fan base deserves that. It’s always a fun part of the year. The competition is high. We’d love to be a part of that. Everything else we can, you know, come together and talk about after. There’s just not enough thought put into it right now. Hopefully we can squeeze in the playoffs and then we can talk about all that stuff later.

Upon first glance, it’s easy to see why this can ruffle some feathers and create that huge lump in your throat that your feeling right now. Don’t worry one bit. I’m here to help you out. The idea that Nowitzki would suit up for another franchise is down right ludicrous, and if you really truly believe it, you haven’t been paying attention. 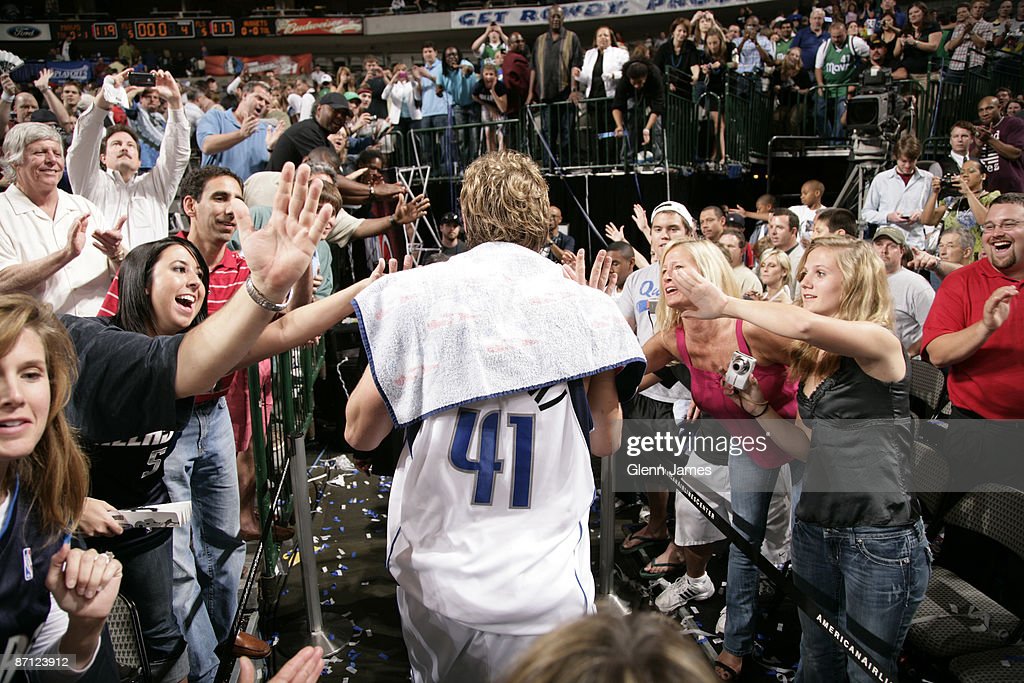 Nowitzki was 20-years old when he came to Dallas from Würzburg, Germany. Despite a rough rookie season, the city seemed to embrace him immediately. Despite not winning a title, he was able to help mold the Mavericks into a perennial playoff contender year in and year out, with the help of Steve Nash and Michael Finley.

Through his 17 years as a Dallas Maverick, he has formed a bond with the city of Dallas. He feels the love from the Mavericks fans each night, and he often lets us know that the love from him for them is the same. He often mentions the fans when he talks about playoffs and championships, and that they truly “deserve it”. He understands that he is the big reason for the success over his career, but he also understands that the powerhouse franchise they created wouldn’t have been possible without the MFFL’s.

Nowitzki is married and has two youngsters. Dallas is the only true city he knows, so for anyone to think that he may look to leave 17 years in Dallas to uproot his family and start all over is crazy.

He also has had the pleasure of getting to really create a relationship with the front office of the Dallas Mavericks. Mark Cuban and Nowitzki have formed a bond over their many years together, and he knows that all this team wants to do is try and put him in a situation to win, despite the last few years of limited success. He isn’t going to head to another franchise and try to learn a whole new front office. He knows what he can expect out of Cuban and GM, Donnie Nelson. That is good enough for him. If it were maybe five years ago, he could have spent the time to make a move like that.

One Team Kind Of Guy

This is what it really boils down to. Nowitzki has managed to do what it seems a lot of superstars just aren’t able to do nowadays: Stay with their original franchise. LeBron James, Carmelo Anthony, Chris Paul, Chris Bosh, and many others have left their teams to try and form “super teams”. Nowitzki joins guys like Kobe Bryant and Dwyane Wade as guys who have played their entire careers with the same team. While we aren’t sure if Wade will fulfill his entire career with the Heat, we know for sure Kobe will, as he is currently wrapping up his 20-year career with the Los Angeles Lakers.

The idea that Nowitzki would opt out and ruin one of the most important pieces of his legacy as an NBA player just doesn’t make sense. Nowitzki is sensitive. He cares what people think of him, whether he admits it or not. He won’t put himself in a position to ruin that legacy.

No reason to worry, right? Wrong. While we don’t have to worry about Nowitzki opting out and joining a different team, we should worry about him hanging those sneakers up, because that’s the only way he won’t be dressing in Mavericks uniform.  The Mavericks are hanging by a thread in regards to the playoff push, and while Nowitzki is playing at a high level, one must wonder what is going through his mind.

Is his latest play his last hurrah? One last push to give these fans what they want?

While some may worry about an opt-out, we all should worry about the possibility of him calling it quits – sooner, rather than later.