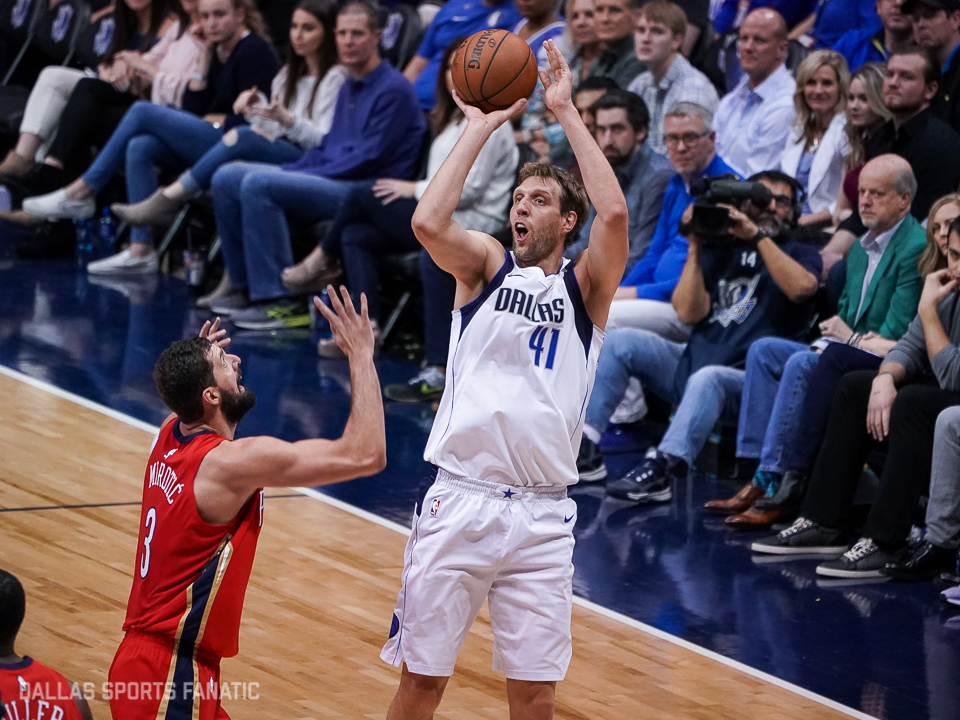 The Dallas Mavericks entered tonight’s game looking to end the New Orleans Pelicans seven game win streak. After a slow start that had the Pelicans leading by double digits throughout, the Mavs clawed themselves back into the game in the fourth. Dallas would use a 14-0 run that included three made three pointers to pull within four points with 10:30 left to go in the fourth. Then All-Star Anthony Davis checked in. The Pelicans went on a 10-0 run in a two minute span to ice the game. Just as in many of the games this year Dallas was close, but not close enough.

He may be 39 years old but that dude Dirk can still ball. In 26 minutes Nowitzki shot 8 for 13, including 3 of 5 from three, for 23 points. The 23 points are his season high. Dirk also added seven rebounds, a block, and an assist to his efficient night. With his eight made shots tonight Dirk passed Elvin Hayes for 8th place in NBA history in field goals made. His 10,976th field goal put him ahead of Hayes. The Mavs may be having a rough season but Dirk keeps on adding to his first ballot hall of fame resume. Enjoy the trailing threes while you still can.

The world is sometimes a bad place. It could use a good Dirk trailing 3 gif. pic.twitter.com/4k7pjOvY3f

Dennis Smith Jr. has put together three consecutive games that should make Mavs fans excited for his future. On Wednesday DSJ went head to head with the reigning MVP Russell Westbrook. Dennis held his own and finished with 17 points, 6 assists, and 2 rebounds, including 10 points in overtime of the close loss. Friday night’s contest with the Bulls saw Smith Jr. score 25 points (2 points shy of his season high) to go along with 3 assists and 1 rebound.

Tonight the Mavs rookie point guard was the best Maverick not named Dirk. Going against the infamous Rajon Rondo DSJ tied Dirk for the team high in points with 23. He made it a point to find his teammates with eight assists to go along with five rebounds. His shooting was not exactly efficient, making only 9 of 22 shots, including 0 for 3 from the three point line. Making up for his poor efficiency, DSJ made 5 of 6 free throws.

The aggressiveness in getting to the hoop is a welcome site for Dallas. What should be even more exciting for Mavs fans is Dennis used his floater twice tonight. We haven’t really seen him attempt the floater this season. Adding another tool to get around big men (who seem to block his drives at least twice a game) will make DSJ even harder to guard. Neither of his floater attempts tonight went in but it is nice to see him getting comfortable enough to use it in game.

Check out this sweet hesitation dribble that opened up the lane for a two-handed baseline jam.

Harrison Barnes seems to always put up the quietest 18 points and 6 rebound type games out of anybody in the NBA. He did the same thing tonight. Although he would have hoped to shoot a little better (6 for 16, 1 for 3 from three), Barnes and Coach Carlisle should be pleased with his performance. Harrison is on a roll for the Mavs over the last four games. He has scored 21, 26, 26, and 18 points in those games. He is also averaging five rebounds and roughly four assists per game over the last four games.

Pelicans Big Two Getting It Done

All-Star Anthony Davis is a monster. Tonight was no different than every other time he plays. Davis registered a double double with 23 points and 13 rebounds in 37 minutes. His partner in crime tonight was Jrue Holiday. Holiday scored a game high 30 points to go along with 7 assists and 3 rebounds in 32 minutes. He seems to be enjoying moving over to the shooting guard spot and having Rajon Rondo initiate the offense. The Pelicans are now in fourth place in the Western Conference with tonight’s win.

With the loss tonight Dallas fell to 19-45. The Mavs continue their home stand on Tuesday night when they welcome former Maverick and current Denver Nugget Devin Harris back to town at 7:30 PM on Fox Sports Southwest.