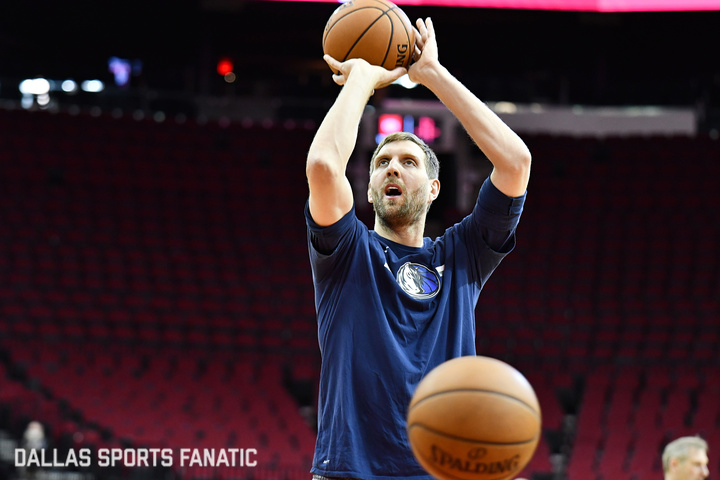 The Dallas Mavericks visited Salt Lake City on Saturday night to try to beat a Utah Jazz team that had just played a double-overtime game. Both teams were playing on no rest as the NBA schedule committee gifted them with a back-to-back set of games right out of the All-Star break. Although the Mavs game against the Nuggets on Friday night didn’t go into overtime, they still couldn’t overcome a Jazz team on even shorter rest. Donovan Mitchell and Ricky Rubio led the Jazz with 25 points each but it was Joe Ingles that came alive in the fourth and proceeded to bury the Mavs comeback chances. Tim Hardaway Jr. had 21 points, Trey Burke scored 20 off the bench, and Dirk turned back the clock to score a season-high 15 points in a 125-109 loss.

Dirk Nowitzki got the start in place of an ill Maxi Kleber. He played a season high 25 minutes and finished with 15 points. Dirk shot the ball decently too, going six 6 for 14 from the field and 3 for 9 from three. The Big German looked the most comfortable he has been this year in this game. Maybe it was the start. Maybe it is because Utah is the place that Dirk has the most points against an opponent for his career. Either way, it was awesome to see the legend fend off Father Time for one more night and play well.

This year the Mavs have done a poor job of taking care of the ball. They are averaging 15 turnovers per game, good for 23rd in the NBA. And even though they were coming off short rest, Dallas had their best turnover game of the year. The Mavs whole team did an awesome job at taking care of the ball. Dallas only had 3 turnovers for the game. That is their best mark this season. Trey Burke, Devin Harris, and Jalen Brunson played point and only had one turnover amongst them compared to a total seven assists. Rick Carlisle said that it was the best thing the team did during his post-game press conference.

When you trade away a player that was averaging roughly 15 rebounds per game, you are bound to have some rebounding struggles afterwards. This is is currently the Mavs situation. Before the DeAndre Jordan trade, the Mavs averaged 45 total rebounds per game. After the trade, they have averaged 42. and since the Barnes trade, they are averaging 38.  On Saturday, Dallas allowed Rudy Gobert and the Jazz to grab 61 rebounds to the Mavs 37. This will continue to be an issue for a team that traded away a lot of their size at the deadline. Carlisle mentioned that he wants his guards to average 20 rebounds per game amongst themselves from now on.

Dallas looks to end their four game losing streak against the LA Clippers on Monday at 9:30 central time.