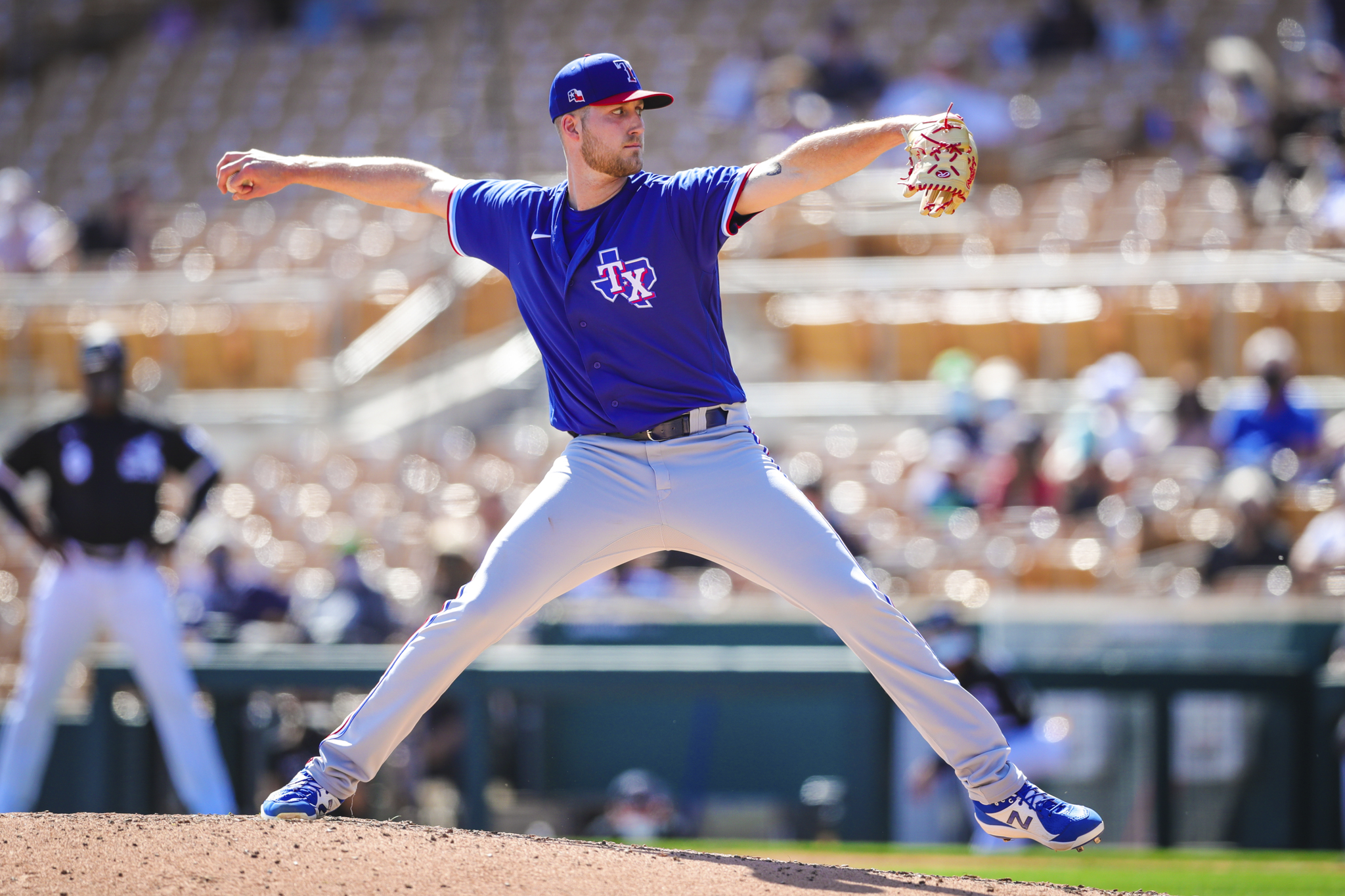 The Rangers rotation feels like opening a Starburst candy wrapper. You have no idea what flavor will come first, but you know the potential flavors will be in there. There are multiple discussions on who fills the void in the rotation. How many rotation spots will there be?. What about the tandem role? How is that going to play out?

Chris Woodward said on Friday that while it looks like Mike Foltynewicz and Kohei Arihara are projected starters, they still have to earn their roles. “At the start, that’s where we’re at. That can change based on what [Foltynewicz and Arihara] do in this camp.” Kyle Gibson’s spot looks clear that he’ll be at the top of the rotation. With Foltynewicz coming back after a rough 2020 and Arihara’s first go in the majors, Kyle Gibson appears to be the reliable arm in the Rangers’ rotation for length. Though the length isn’t on his mind for Gibson, it’s the desire to pitch the best he can be. “I can’t go out there and think that every time I take the mound, it’s important for me to go seven or eight innings,” Gibson said.

ICYMI: Folty made a rather decent first impression yesterday! pic.twitter.com/sUL53295C9

Manager Chris Woodward brought some insight regarding how the club may handle the tandem roles. First, it looks like the Rangers will fill four pitchers for two days, meaning two tandems. Second, one tandem could be 70/30 (70 pitches for the first pitcher and 30 for the second) while the other is 50/50. While details are still sorting out on who would participate in those roles, Woodward told me that the Rangers might use that to their advantage. “It forces the other team to either flip their lineup,” Woody said. “It strategically creates a lot of advantage for us if we do it right, plus we’re maximizing our outings. Look for a righty/lefty combination in the two tandem roles to create that advantage.

For right now, five to six guys are bidding for those four tandem roles. If the club goes to six rotation days and two piggyback spots, you’re looking at eight total rotation spots with a thin bench and bullpen. Midway through camp, guys like Wes Benjamin and Taylor Hearn are standouts. “Wes is pretty special. He goes out and competes,” Woody told me, “He’s going to get a track record for attacking the strike zone.” Benjamin’s outing on Tuesday forced him to make adjustments on the fly and recover after a problematic sequence where he dropped a popup and threw a wild pitch in back-to-back events. “I was glad I had that moment because that’s going to happen during the season. Glad I got it under my belt and out of the way, and I know I can settle myself down and get back into it,” Wes said to me.

Taylor Hearn was dominant in his last outing. After Hearn hit Tony Kemp, he retired the remaining seven hitters he faced. “Stuff like [a hit by pitch] can derail a game, especially as a starter, and that’s something I’ve always credited myself on more sustaining game and not getting ahead of myself and taking pitch by pitch,” Taylor said after his outing Thursday. Add to that Kyle Cody, Dane Dunning, and Kolby Allard the Rangers have some competition for starter/reliever roles.

#rangers Kolby Allard with some work in this morning. pic.twitter.com/6Nl267dWQT

Jordan Lyles is an intriguing name among the Rangers’ potential pitchers in the rotation. In 2019, Lyles threw 141 innings for the Pirates and Brewers. However, Lyles led the majors in 2020 for the most earned runs allowed (45). While it wasn’t one-hundred percent confirmed, it appears from Friday that Lyles will at least start as part of the tandem role and work his way up. “[Jordan] wasn’t happy about it,” Woodward said. “I actually like that he’s not happy with it.” Now, if Lyles goes out and performs like he did to end 2019 in Milwaukee, it’s clear that Jordan would snag a spot as a full-time starter in the rotation. Lyles is different because he’s not on an innings limit. It’s about finding quality innings. From what the Rangers see from Lyles, it’s positive news. “There’s a lot Jordan has worked on this offseason. I look for him to have a great year. He’s been throwing the ball well, and he looks really good,” Gibson said to me. For Lyles himself, it’s about a new chapter and moving on after a scuffling 2020 season. “You just turn the corner, turn the page,” Jordan said. “I can’t go back and change last year, how poor it was, my outings, and my performance.”

Opening Day is less than three weeks away, but there’s a lot of optimism between the Rangers’ arms. Kyle Gibson on Friday provided praise for a lot of his brethren on the pitching staff. “I think we have a lot of really good arms in the locker room and on the starting staff,” Kyle said. “I don’t look at it as a scenario where anyone guy has to go out there and try to make up for someone else.” The rotation has many good arms with life on their pitches; like the juice on Starburst candy. The question is, which flavor are you going to get?