It is officially 2019 and the MLB season is less than three months away. In fact, pitchers and catchers for the Rangers report in about thirty days (February 12th). While all of us and you fine folks get ready for the season, let us take a quick gander at the 2019 schedule for the Rangers. Here are some notable instances to the schedule; also home game times and some road game times have not been announced.

1. Opening Day vs the Cubbies

In the last season of Globe Life Park, the Rangers will open up against the 2016 World Champion Chicago Cubs. It will be the first time the Cubs visit North Texas since May 2010 (Cubs took two of three and all three games were decided by one run). The opening series has some familiar faces as well. The Rangers could wind up facing Cole Hamels and Yu Darvish depending on how Joe Maddon wants to align his rotation. This series also will put together two childhood friends. Joey Gallo and Kris Bryant grew up as little league teammates in Vegas, and it will be the first time they will meet on an MLB field as major leaguers.

2. Rangers and Astros head to head

Last season it was a strange occurrence. All of the Rangers and Astros nineteen meetings all occurred before the month of August. It won’t be too different in 2019. The Rangers and Astros do meet in September, but it’s for a whopping two-game series in Houston. Seventeen of the nineteen meetings are before July 22nd, and the Astros visit Arlington twice in the month of April. I am not quite sure why the MLB schedule makers obsess with the bulk of the silver boot rivalry occurring before the All-Star break, but two years in a row and here we are. These two clubs will meet exclusively on the day after the All-Star break, the only game in the majors that day, at Globe Life Park.

Normally in September, the schedule designs to put division foes together as the race to the pennant comes down. Now I am not sure if this occurred because the schedule makers felt the Rangers would not be contending or if it was the luck of the draw. In September the Rangers only have nine games against the west (6 vs OAK, 2 vs HOU, 1 vs SEA). To make matters stranger, the Rangers play four of the five AL East teams in September to equal the remaining sixteen September games. In fact, all six of the Rangers meetings with the Yankees occur in September.

The Rangers last homestand of the season will begin with the World Champion Red Sox, and finally, end with the New York Yankees to close out Globe Life Park. For you college folks that have school, there is a positive at least in the fall semester. There are only two nine o’clock Monday-Thursday west coast games in the last thirty-five days of the season. Those two games will be in late August in Anaheim against the Angels.

I have already mentioned the Cubs, but the Rangers will face the entire NL Central. They also face a usual NL foe, the Arizona Diamondbacks, in a traditional two-and-two series. For the first time since Game 5 of 2011 World Series, St. Louis visits Arlington for a weekend series in May.

The Rangers also go to PNC Park in Pittsburgh for the first time since 2007 (I remember distinctly the Kameron Loe eight-inning shutout gem he had in the third game of that series). This will be a part of another two and two series that the Rangers and Pirates square off. The two-gamer at home starts April 30th and the series in Pittsburgh starts the following Tuesday, May 7th. In addition, the Rangers will visit Cincinnati for a weekend in mid-June (while the Paul McCartney concert is going on), and take on the Brewers in Milwaukee in mid-August for a weekend series.

5. A spread out schedule

Texas has only one “twenty games in twenty days” stretch this season, an MLB limit for consecutive games without an off day. That stretch comes in June starting on the fourth with a six-game homestand between the Orioles and Athletics. It expands to the road for four against the Red Sox, and three against the Reds. Finally, the team goes back to Arlington for a homestand that features four against the Indians and three against the White Sox to close out the stretch. The Rangers have a seventeen game span in August, but nothing else exceeding thirteen games in a row. Finally, the Rangers have five instances where a weekday two-game series mixes with an off day before and after the two-gamer. This is due to MLB expanding the season to add more off days. 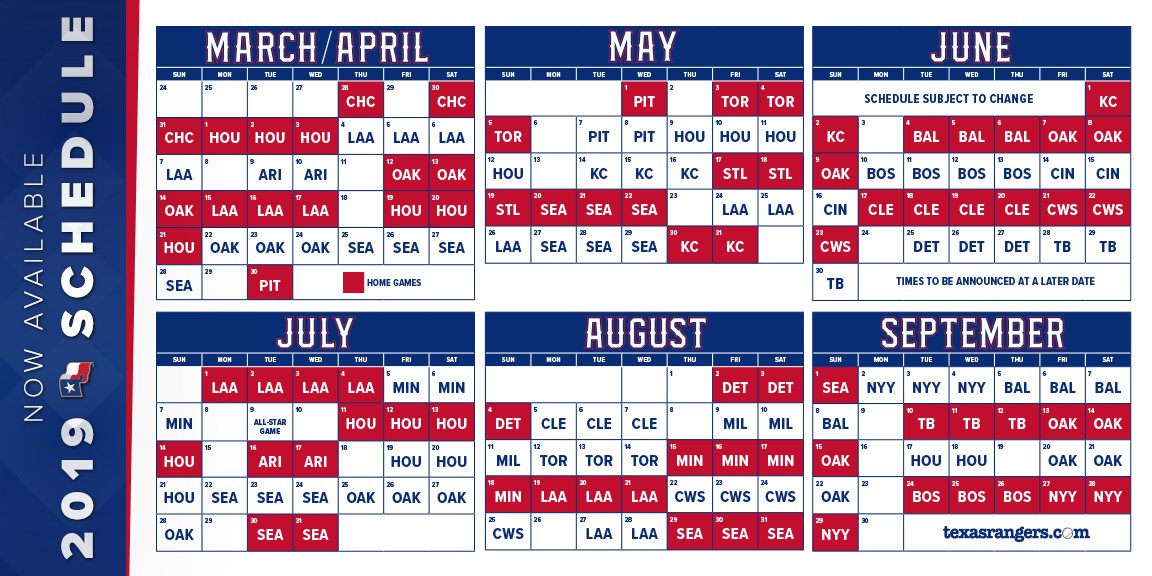 For the most part, the opponents are spread out. The only American League team the Rangers do not play before the All-Star break is the Yankees. In addition, the only AL team Texas does not play after the break is the Royals. The season is coming up and before we all know it, Spring training is here. Let the excitement begin.