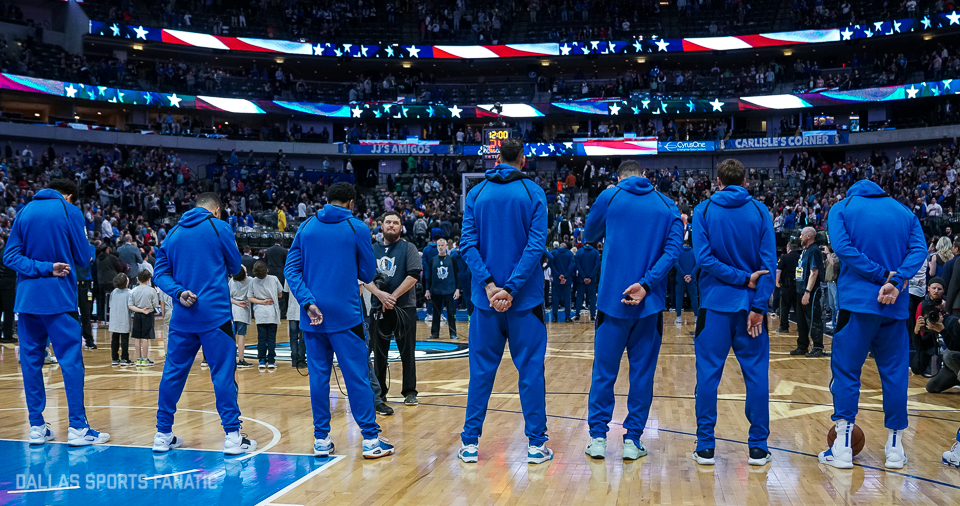 Do the Mavs have the deepest guard rotation in franchise history?

Do the Mavs have the deepest guard rotation in franchise history?

The Dallas Mavericks are two months away from entering their 40th season as an NBA franchise. The schedule was released on Monday and the Mavs open the regular season at home against the Washington Wizards on October 23rd.

This is the day Mavs fans will realize how deep the team is at the guard position – not only on paper but on the floor as well.

Head Coach Rick Carlisle, as we all know, loves the three-guard lineup. The modern-day NBA also as we know, is getting smaller and shooting more and more each season. With those two factors, this is a match made in heaven. You may not like this take, but Donnie Nelson, Mark Cuban and crew had a near-perfect offseason.

Carlisle is going to be able to utilize any three from the group of, Luka Doncic, Delon Wright, Tim Hardaway Jr., Seth Curry, JJ Barea, Jalen Brunson and Courtney Lee. Any of which could go more than 20 minutes on a given night and could develop a hot hand on the perimeter. That makes preparation from other teams extremely difficult, and I won’t even mention Kristaps Porzingis in this story.

You could argue the two Finals teams back in ’06 or ’11 had better guards, but we’re discussing deepest amount of guards here. Nash and Finley made up some deep guard lineups in the early 2000’s, as did Mavs legends Derek Harper, Brad Davis, and Rolando Blackman in the 80’s. However, those rosters couldn’t make a case for each of the guards to be a starter. This roster has that luxury.

Let’s break down this guard lineup one by one and allow me to explain why this is the best group Carlisle has ever had entering his 12th season as head coach.

Do I need much explanation here? In Luka’s rookie season, he had totals of 1,526 points, 563 rebounds and 429 assists. The only player to ever put up such numbers in history is Oscar Robertson. To say that Trae Young was ‘in the running’ to be Rookie of the Year is completely asinine and laughable.

As the 20-year-old enters his second year, the expectations are high. He is the leader of one of the most exciting young teams in the league and is ready to take the next big leap of being one of the best in the league. Maybe even an MVP candidate. He’s ready to lead this team and he’s certainly the best guard Carlisle has ever had on one of his rosters.

The 6’5” combo guard was involved in an offseason sign-and-trade acquisition with the Memphis Grizzlies where the Mavs sent a second-round pick. Not only will he be a great fit for on and off the ball play next to Luka, but his versatility helps and allows him to rebound exponentially well. The Mavs approach on rebounding remains the same: as a collective and he fits the mold perfectly.

The projected starter fits the mold in the lineup, particularly because of his defense. He averages 1.8 steals and 0.7 blocks per-36 minutes over his four years in the NBA. Last year after being traded to the Grizzlies from Toronto, he averaged 12.2 points, 5.4 rebounds and 5.3 assists in 30.8 minutes per game. It was only 26 games, however, the 27-year-old displayed his potential especially when Mike Conley was shut down for the season. He had three triple-doubles in his last four games. If given the opportunity, even in the second unit, this guy will show you that he can ball – from all aspects of the game. Check him out for yourself:

After coming over alongside Porzingis in the trade with New York, his efficiency shot up. I realize 19 games with the Mavs is a small sample size, but it should not be left out of the equation. Luka not only makes everyone around him better, but he also allows guys around him to find open looks and take smarter shots. THJ benefitted from this most as soon as he got to Dallas.

The 27-year-old is projected to start this year in the backcourt alongside Luka and Wright. With THJ’s elite shooting ability, he will fit right in and mesh well with floor spacing alongside the other two guards in the starting lineup. What we would love for him to improve is his perimeter defense – one thing we miss from Wesley Matthews.

Oh, the glorious return to Dallas. He should’ve never left. He and the Mavs agreed to a four-year, 32 million-dollar deal, so he’s here to stay this time. Much like Hardaway Jr., Curry will be that elite spot-shooter, except on the second unit. Last year, Curry was third in the NBA in three-point percentage behind only Joe Harris and Meyers Leonard – yes he’s a more efficient shooter than the other Curry on the west coast. Here’s some proof as well as my favorite memory of him in a Mavs unifrom:

With the case to be the sixth man this year for the Mavs, Curry will get many deserved opportunities and minutes in a recognizable Carlisle offense. He may just go for a 50-40-90 season – you heard it here first.

On a slightly separate note, why don’t you recruit your brother on over here? Wouldn’t that be a fun, electric pairing alongside Luka?

Mr. fan-favorite approaches his 11th season with the Mavs out of 15 total. The only player left from the divine 2011 championship team. I can’t think of anyone who fits and can execute Carlisle’s scheme any better than JJ. Each time he comes off the bench into the game, the Puerto Rican brings consistent leadership and production to each and every minute.

“It’s pretty well known that JJ Barea will someday be coaching somewhere in this league,” said Head Coach Rick Carlisle. When the coach says that about one of his players, that alone means he’s a phenomenal leader and player both on and off the court. If healthy, it seems as if the 35-year-old gets better and better each year. Look for JJ to have a bounce-back season once he gets to full health since tearing his achilles in January.

Slowly becoming a fan favorite off the bench is point guard, Jalen Brunson. Last year’s second-round pick had an over-productive rookie season in the shadows of Luka Doncic. Brunson quietly earned 10 votes towards the All-Rookie teams – more than lottery pick’s Wendell Carter Jr., Mo Bamba and Miles Bridges. He and Luka are apart of one of the best draft classes this franchise has ever had.

As Brunson continues to progress behind veteran leader, JJ Barea, and competition in the backcourt, keep an eye on him and his efficiency. The greatest aspect of Brunson’s game is his ability to lead a half-court offense with confidence and poise. While averaging 22 minutes per game last season, he only turned the ball over 1.2 times per game. As a rookie playing that amount of time is really unheard of. Even JJ, who plays less than him, turned the ball over more at 1.9 times per contest. Again, he only helps solidify the Mavs going forward with youth in a favorable system led by Carlisle and Luka.

Next to JJ Barea and Boban Marjanovic is another 30-plus-year-old veteran, Courtney Lee. He was another guy that came over in the Porzingis trade. After being apart of multiple trade rumors this offseason, Lee looks to move forward in contributing to this team in any way he can.

The 6’5” guard seems to be a guy who’s always on the move. He played for three different teams last year on a very overpriced contract considering his age. On the final year of his four-year contract, the former first-round pick will make $12.7 million, which is third-highest on the team. The Mavs will continue to look for a trade suitor, so they can get something for him, however, until then, he will remain as another veteran who will see the floor the least out of this deep set of guards.

I realize the Mavs have been a franchise for almost 40 years now, and yes, I also realize the great lineups they have had in the past, but you can make the case here that this is the best group of guards, collectively, the franchise has ever had. The mix of youth and veteran presence always helps teams excel to their fullest potential.

Like I said earlier. Any of these guys could start for this team and any of them could put up 30 points on any given night if given the opportunity. Coach Carlisle has a lot to deal with here and seems to never fail while maximizing his player’s fullest potential, especially at the guard position.

We’re now days away from the start of training camp, so get excited Mavs fans. There is a loaded roster with loaded potential right before our very own eyes. As Michael Jordan once brilliantly said, “The ceiling is the roof!”