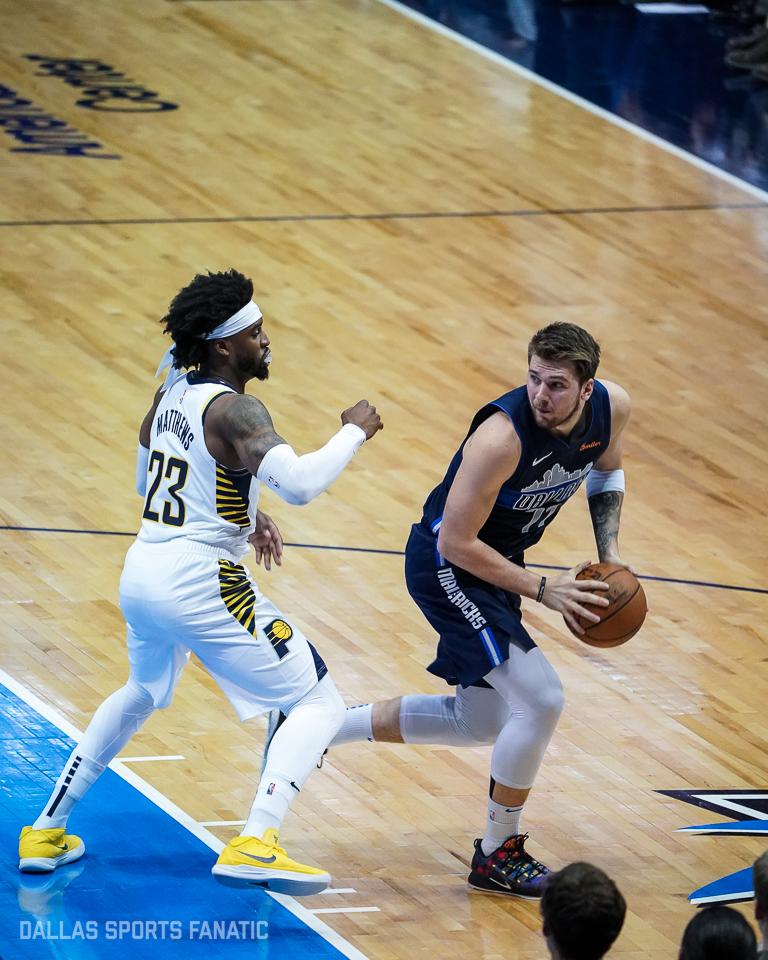 The Mavericks came into tonight’s game looking to change their fortune as they rode a five-game losing streak. In a back-and-forth battle with the 3rd seed in the East, the Mavs prevailed the efforts of formerly Maverick, Wes Matthews and the Pacers to win 110-101.

On the brink of Luka’s 20th birthday tomorrow, he made sure to finish out his teens with an impressive performance, finishing with 26 points, 10 rebounds, and 7 assists. His performance tonight also included sinking two shots from downtown in the final minutes to clinch the game.

Luka was matched up against former running mate Wes Matthews all night long. The two enjoyed some trash talk and laughs throughout the night with Luka getting the last laugh.

“Anything involving Wes is going to be a stimulated situation and that’s one of the reasons we loved him,” Carlisle said of the competition between Matthews and Doncic.

Doncic has some thoughts of his own on the matchup against his former teammate, “Amazing, he’s my guy. We were talking a lot. It was really fun.”

Luka hit the dagger step back three in front of the Pacers bench and made sure to stare down the opposing team as he made his way back to the Mavs sideline with good reason.

“Yeah, it was an assistant coach. He was talking a lot during the game so then he didn’t talk that much,” Luka said as he laughed after the game.

It’s safe to say as Luka’s time as a 19-year-old comes to an end, he certainly hasn’t played like you’d imagine a 19-year-old to play.

Rick Carlisle finished his postgame press conference by saying the rookie has been “one word: phenomenal.” Phenomenal indeed, Coach.

Not to be overshadowed by his fellow rookie, Jalen Brunson had what is probably his best game yet as a Maverick. Brunson scored a career-high 24 points on 9/14 shooting along with three rebounds, five assists, and three steals.

“Was able to make shots. I think I really changed the game on the defensive end,” Brunson said of his performance tonight. “Confidence level is always getting better because I’m always working as hard as I can and that’s where I get my confidence from.”

Coach Carlisle said of Brunson’s night, “He had a great game, obviously. He’s gotten better and better as the year’s gone on.”

Jalen added a stepback three of his own ala Luka down the stretch to help put the game out of reach.

Since the trades and injury of J.J. Barea, Jalen has had more responsibilities and playing time coming his way, which he’s taken in stride and owned as a rookie. He’s really starting to show that he was worth being taken in the first round and is looking to be a solid piece for the Mavericks future going forward.