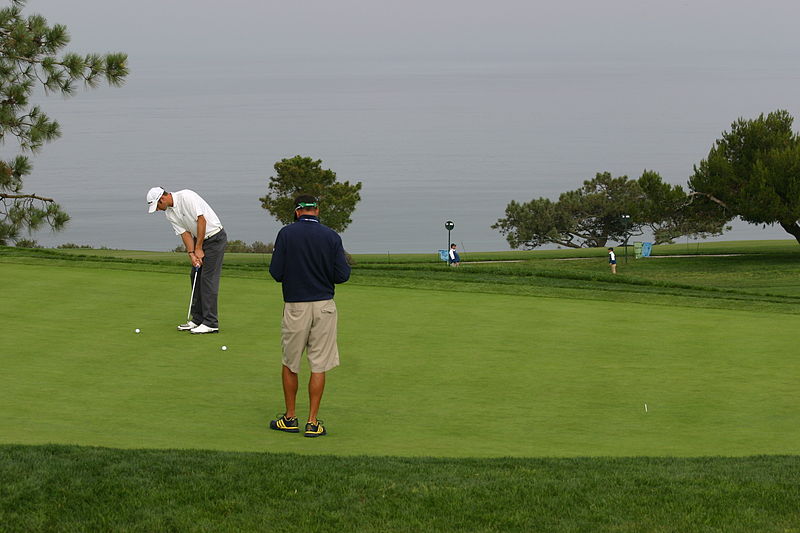 I’m not sure anyone needed to bother showing up this week for the Northern Trust at TPC Boston because Dustin Johnson was the only one in the running by Sunday afternoon.  The 22-time PGA Tour winner and 2016 US Open Champion shot an EIGHT under 63 on Sunday to beat the field by an astonishing 11 strokes.

Due to his laser like ball striking and complete swagger that we’ve come to expect from Dustin, he was able to shoot a combined -30 under par during the four rounds.  He came up one stroke shy of tying the ALL TIME PGA Tour record for four rounds.

Despite strong play from Kevin Kisner, Harry English and others, their best was simply not good enough to match an all-time great playing out of his shoes.

I mean, Kisner said it himself.  When DJ is on like this, no one stands a chance.

We don't deserve @K_Kisner. On what DJ is doing this week: "I've been watching it for 25 years. I'm pretty accustomed to. When he's on, I just step to the side and try to add on to my bank account."

Even Justin Thomas was impressed:

It was one of those week’s that a golfer dreams of.  By the end of the week, he as ranked number one in proximity to the hole, a ridiculous 28 feet.  Hit it close, great things happen.  When you pair that consistency with the fact that he didn’t miss a single green on Sunday and only having to putt 104 times, you’ve got yourself a winning formula.  It really was one of those weeks where it’s hard to point out a particular shot that changed the tournament for Johnson.  He was just smooth, calm, cool and consistent for four straight days and that of itself is the recipe for success.

Here’s some other fun stats to reminder you how great DJ is:

He had at least one eagle each round, five total. Sunday’s came at the par-5 second where he put the peddle to the medal immediately, letting the rest of the field know they’re playing for second.

After a relatively blasé start on Thursday left him sitting at 4-under and tied for 20th, Johnson played his first 11 holes Friday in 11-under, then the next in 15-under. For the week he had 23 birdies, five eagles, and three bogeys that seemed as frequent as a leap year.  I mean, Scottie Sheffler shot 59 this week and no one remembers that because Dustin demanded storylines.

Johnson has won at least once in every one of his 13 PGA TOUR seasons, an overwhelmingly impressive level of consistency in a modern golf game that oozes talent.

Ranks for @DJohnsonPGA this week:

Look at that swing, look at those stats.  Unreal.

He leads the FedEx Cup standings as the fields shrinks heading into the BMW Championship this week at Olympia Fields North Course.  The field shrinks to 70 players and includes most of the big names.  However, our guy Jordan Spieth had another unsuccessful week and saw his 2020 season come to an end.  It won’t be long before he’s back on the links, however, as the U.S. Open is less than a month away.

Be on the lookout for a full course and tournament preview coming this Wednesday.  For now, let’s head back into what else happened this week in the world of golf.

Haven’t heard of her?  Well, neither has most of the golf community before this week.  Ranked 304th in the world on the Rolex Rankings and did something astonishing with a life-changing win.  Just this past July, Popov found herself at the Inverness Club – as a caddie.  In fact, if the pandemic hadn’t stopped a number of players from participating this week, Popov wouldn’t even be part of the field.  However, she was and she took full advantage.

I mean, this rock star didn’t even have a caddy this week!

Hit a beauty from the bunker on the Postage Stamp.
Rake your own bunker.
Sanitize.
Take off running to the green to keep up.

*contending in a major without a caddie* pic.twitter.com/kzF6yIH1Au

She showed up, played the best golf of her life and left a major champion.  Putts like this helped.

Extraordinary stuff from Popov. Another birdie and she's now got a 4 shot lead with two holes to play#AIGWO #WorldClass pic.twitter.com/Pi7AEJa4fL

Stories like Popov’s just go to show you how incredible this game can be.  It’s the most competitive game in the world and it only takes one universally great week to completely change your life.  She left Scotland with $675,000 (more than 5x her previous career earnings) and an LPGA Card which she did not have entering the week, securing her 2021 status.  Life-changing stuff.  Love to see it.

An excellent week of golf for golf fans and more greatness to come with the BMW Championship looming.  The journey to East Lake and the Tour Championship presses on, only the best in the world remain.  Only time will tell who will pad their bank account with $15 million and a cool looking trophy.

I’ll see you on the course!