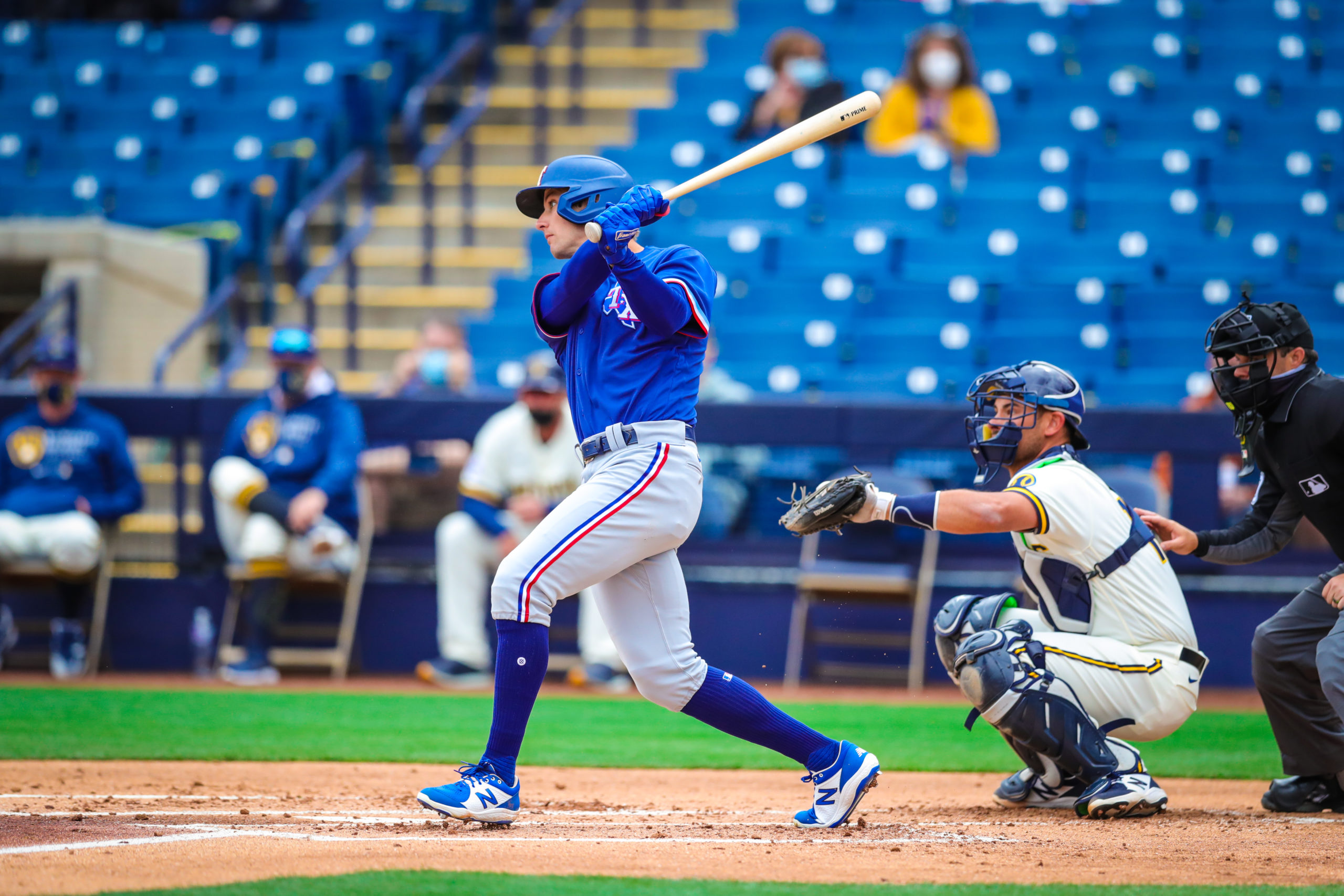 The day was December 21st, 2018. The Rangers sent a highly touted player in Jurickson Profar to the Oakland Athletics. Of course, at the time, Profar didn’t live up to the potential as a top prospect. His best season came in 2014 with a 20 homer and 77 RBI season. The three-way team trade (with Oakland and Tampa Bay) also sent Kyle Bird, Brock Burke from Tampa Bay, and International money plus Eli White from Oakland. The Athletics were the third team to draft Eli, who elected to play at Clemson when Cincinnati drafted him in 2013 and 2015 while also spending time in the Cape Cod League.

Eli made his debut on September 1st in Houston. Unfortunately, White began his MLB career 0 for 17 before scorching an RBI double eight days after making his debut. The club liked his at-bats, and his defense was elite. Defensively, Eli is a beast. He’s played in seven diamond positions (hasn’t pitched or caught a game at any level) and spent the bulk of his early career at shortstop. Rangers manager Chris Woodward said that Eli is an option at first base as a right-hander if the club needs him.

2021 on the offensive side has been a scuffle for Eli White. He made the club out of Spring Training and started 2021 7 of 44 (.159). While the numbers at the plate don’t look great, Chris Woodward understands the lack of playing time. “It’s hard to hit when you’re not playing every day,” Woodward said. “He’s got a tremendous attitude. He doesn’t ever complain about anything. I know I’m always going to get the best of him.” Woodward drew comparisons to Adolis Garcia when talking about opportunities for Eli. “Look what happened to Adolis [Garcia]. He got an opportunity, and he wasn’t even on our team, and he got an opportunity and took it and ran with it. I told him to make sure he stays ready and makes sure he’s still working.”

Joey Gallo said Tuesday that in Spring Training, he and Woodward talked about how different Eli looked in the offseason. “He looked like he was on a mission,” Joey said. “He was going to improve his swing, he was going to do everything he could defensively to get better, and the guy absolutely flies.” The speed is what grasps the eyes of his teammates. “He’s probably the fastest dude I’ve ever played with,” Willie Calhoun told me Monday. “The guy flies.” Keep in mind; Willie was teammates with Delino DeShields, which says a lot about White.

Among the 298 players who have at least 10 sprint opportunities, the Rangers have 3 of the 8 fastest

Has Eli improved from his first partial season in the big leagues? According to his skipper, yes. “He’s improved in a lot of areas, especially in his swing,” Woodward said. “He’s definitely worked a lot in trying to control the tempo. I feel like it’s better.” Again, we’re still in the early stages with one month down and five to go, but it’s the work Eli has done that’s getting his teammates’ attention. “[The offseason work] says a lot about not only the player he is but the person he is,” Joey said. “He came in, and he took a lot of pride in the offseason to improve, and he knew he had to improve in certain areas, and he’s been doing that. I think that’s a pretty cool building block for us in the future.”

Right now, the splits offensively favor right-handed pitching for White. The question is where that consistency is going to come from? Eli’s advantage is that he’s a speed threat off the bench or can thrive as a defensive replacement in the outfield. However, it falls into a similar category to Ronald Guzman when Guzy was on the roster. Woodward did tell me that the speed gives him a little more advantage in this role than a power threat like Guzman. It’s curious when Khris Davis comes back where the Rangers will fill a roster spot; Texas has three minor league options available for White. The future becomes intriguing for the guy that Joey Gallo calls “an absolute freak athlete.”