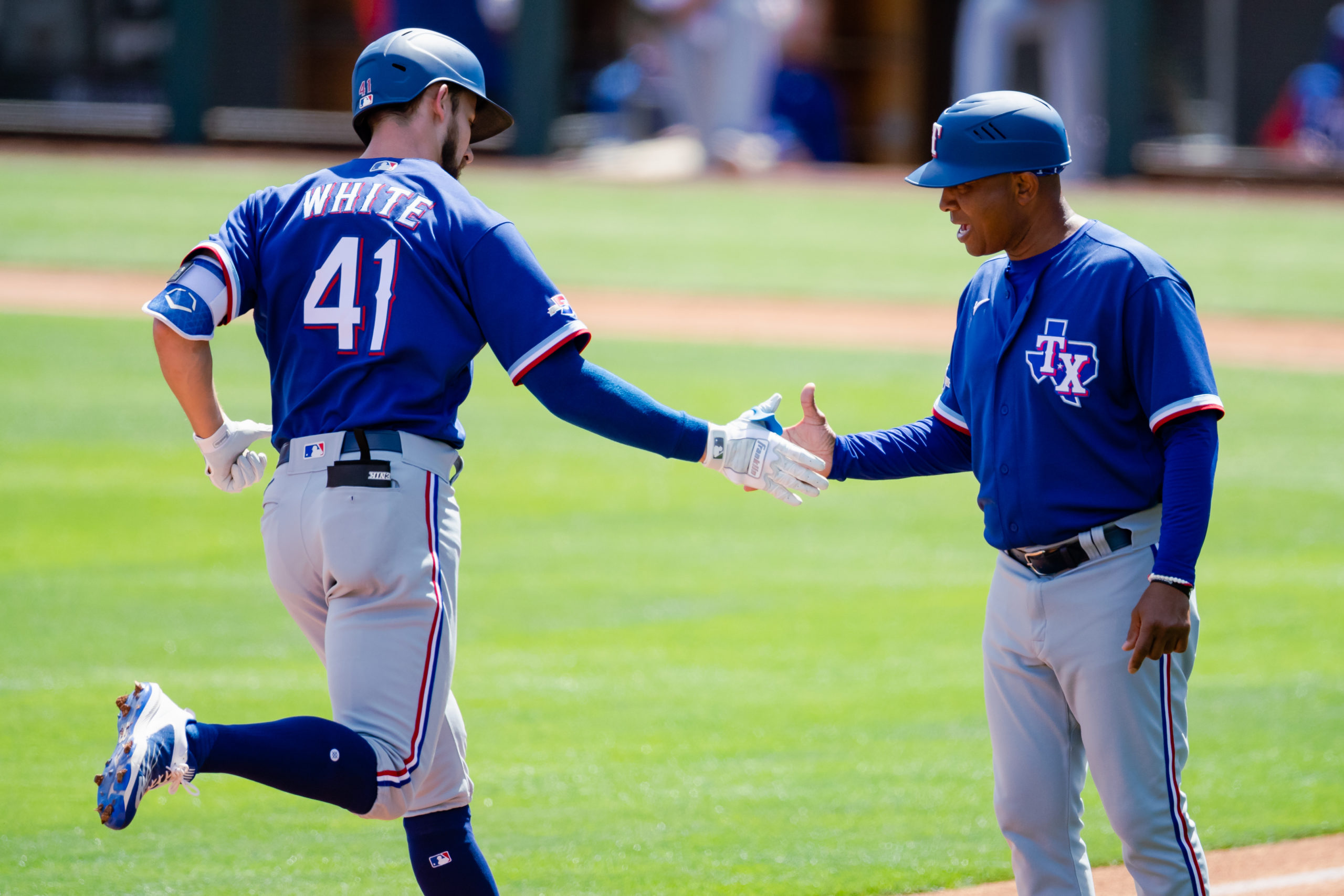 Eli White burst into the scene last Spring but never got entirely going in 2021. White hit under the Mendoza line at .177 with an on-base percentage a hint over .250. Then, in early August, his season ended abruptly when White had to get season-ending elbow surgery, ending his rookie campaign. “Body is getting in shape [and] feeling healthy,” Eli told me Thursday. “Elbow is feeling good; that’s been a plus, and it’s been good as I’m cranking up in my throwing program and back into normal throwing.” White showed off a new swing this Spring, but there’s one aspect of the game that Chris Woodward wants to also see from Eli throughout the season, bunting.

The book on Eli is that he’s a great defender in the outfield (also in the infield, too). He can showcase power which he did at times in 2021, but the central aspect of Eli’s game is his blazing fast speed. “It’s a weapon,” Chris Woodward said Thursday when asking about Eli White bunting. “We want to see him hit, but when it comes to winning a game and being a baseball player, that should be part of his arsenal.” Last season, White was 0 for 4 in bunt attempts, but bunting is an aspect, “It’s something that I want to be a part of my game,” Eli told me. “I’m getting out there working on it with  (Tony) Beasley, making sure that if the situation arises and that’s something I can do or get on base or help the team out by moving runners, that’s something I want to do.”

The speed of Eli White has the capability of changing games and could be a force in a potent lineup to complement guys like Corey Seager, Marcus Semien, and Nathaniel Lowe. “He’s the fastest guy in baseball,” Chris Woodward said about Eli White. “Use that to your advantage. You’re doing your job to help us get a run but also putting a ton of pressure on the defense.”
Another aspect of Eli’s speed that could prove coveted is his base-stealing ability. Again, he’s one of the faster guys in baseball, but according to Chris Woodward, there’s one thing that White struggled with, trusting his speed. “He does his homework, [but] there’s a tiny bit of hesitation,” Woodward said. “When it comes to jumps, he doesn’t fully trust. Sometimes there’s a slight hesitation, then he goes, which leads to a late break.”

There’s a lot of room to grow, and the mentality of trying not to be perfect is something he’s working on. “He needs to get out of that comfort zone of ‘okay, I’m going to be perfect,'” Woodward said. “You can’t be perfect in this game, and I talked to our whole base running group about that. You got to be fearless out there.”

Eli White is bidding for an outfield spot on the Opening Day roster. His Spring started strong, and while the numbers slightly dwindled, Eli has had an excellent overall Spring Training in 2022. The question is if it’s good enough to make the roster. The Rangers optioned Leody Taveras earlier in the week, so the Rangers’ decision has Adolis García in center field, leaving White off the roster, or White playing and placing Adolis in right field (with other variations in order). According to the Rangers’ manager, if Eli White can grasp trusting his speed, he can become an elite player.