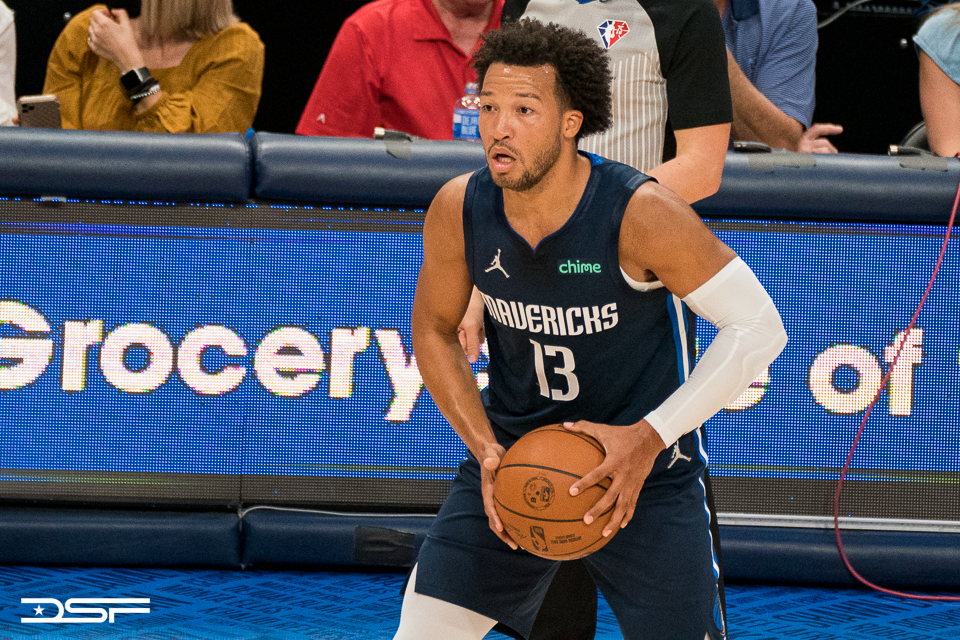 Expiring contracts of Jalen Brunson and Dorian Finney-Smith shouldn’t be untouchable, but only for the right piece for rolling Mavericks

Expiring contracts of Jalen Brunson and Dorian Finney-Smith shouldn’t be untouchable, but only for the right piece for rolling Mavericks

As we head into the back half of January, the February 10th NBA trade deadline is fast approaching. After dealing with injuries and a breakout of COVID-19 over the last month, the Mavericks are finally healthy and playing their best basketball of the season. Entering Monday night’s game with the Oklahoma City Thunder with a 24-19 record and sitting at fifth in the Western Conference, Dallas has a real opportunity to keep things rolling over the next few weeks.

Now first-year GM Nico Harrison has to deal with the following conundrum: Do you let the team continue to roll with this same roster that is getting its first real chance of the season to all play together or do you look for a massive shake up if the right deal presents itself?

Mavericks fans on Twitter certainly seem to be a bit divided on this as names like Pacers center Myles Turner are often being linked to Dallas in trade rumors. The asking price has fluctuated on Turner over the several weeks that his availability has been well known on the trade market. Some days it’s multiple first round picks and other days, like Monday, it’s merely for a strong young player and an accompanying role player.

A deal that is reportedly possible, no way to confirm this is true or has even been discussed, is a deal that would feature Dwight Powell and either Jalen Brunson or Dorian Finney-Smith. Powell is likely just being included to make the salary numbers work, but the real piece Dallas would be giving up would be Brunson or Finney-Smith.

Both of these players are going to be entering unrestricted free agency this summer and Dallas would be dipping well over the salary cap, which would be allowed thanks to owning both players’ Bird Rights, for the first time in a long time to retain them. It’s going to be costly and it will necessitate the Mavericks moving on from other big salaries for role players on the roster like those of Dwight Powell, Tim Hardaway Jr. or even Maxi Kleber, just to name a few. However, it’s far from impossible to pull off or just a given that one of or both of them are gone this summer. The Mavericks essentially just have to be willing to write the checks it will require to retain them, barring either of them just desperately wanting to go somewhere else.

Both of these players are also having career seasons by averaging career highs in points, assists and minutes per game. These are two very important pieces of what the Mavericks are doing this season. These are two starters playing very heavy minutes for a team comfortably in a playoff spot at the moment. Are they off the table in trade talks? No, but it better be for the right player in return.

Looking directly at Myles Turner, who is always going to be linked to Dallas since he went to high school at Euless Trinity, does he even make sense for this team? Turner is a center who would certainly require playing at the same time as Kristaps Porzingis if you’re dealing another one of your starters for him. What has been one of the main complaints from Mavericks fans this season? Too many minutes with KP playing next to another big.

Of course you’d have to give the talent edge to Turner over someone like Dwight Powell, but does Dallas really need a player with expectations of such heavy minutes playing that role in their rotation?

While he is advertised as a stretch big, Turner is a career 35% shooter from deep and with Kristaps Porzingis already struggling from deep this season, Dallas doesn’t need a second big missing three pointers at a high volume.

On defense, Turner is consistently one of the league leaders in blocks and is averaging close to 3 per game this season, but Indiana’s team defensive rating is 21st in the NBA and 22nd when it comes to allowing points in the paint. Do blocks and steals tell the entire story for someone as a defensive player? Absolutely not.

I just don’t see a fit for Turner with the Mavericks at this juncture, unless it was a complete giveaway by Indiana. Sure, it would look cool to see his name in the starting lineup alongside Luka Doncic and Porzingis and the Mavs Twitter account sending out highlights of his blocks would get tons of likes, but what is the real fit here? Especially if it requires giving up one of your starters who have been playing so well and do all the little things the team needs from them.

If the Mavericks are going to acquire a player making the money that Turner does ($18 million this season and next), it needs to be for a versatile wing who has the size to play team defense well and/or shoot the ball more efficiently than Turner. Maybe even someone like Turner’s teammate Caris LeVert (yes, the shooting numbers aren’t great)? Getting someone like that would certainly require at least Brunson and several other assets the Mavericks may or may not have at the moment. If they could pull off a deal like that, I’d endorse it. This league values guys in LeVert’s size range (6’6″) more than it values those in the range of Turner (6’11”) and Brunson (6’1″).

So I’m certainly not saying the Mavericks can’t move or upgrade from players like Brunson or Finney-Smith, it just needs to be for the right players. If those kinds of players aren’t available at a price the Mavericks can meet in the next few weeks, their best move would be retaining the pair in the offseason and circling back to their search for the versatile wing in the summer.