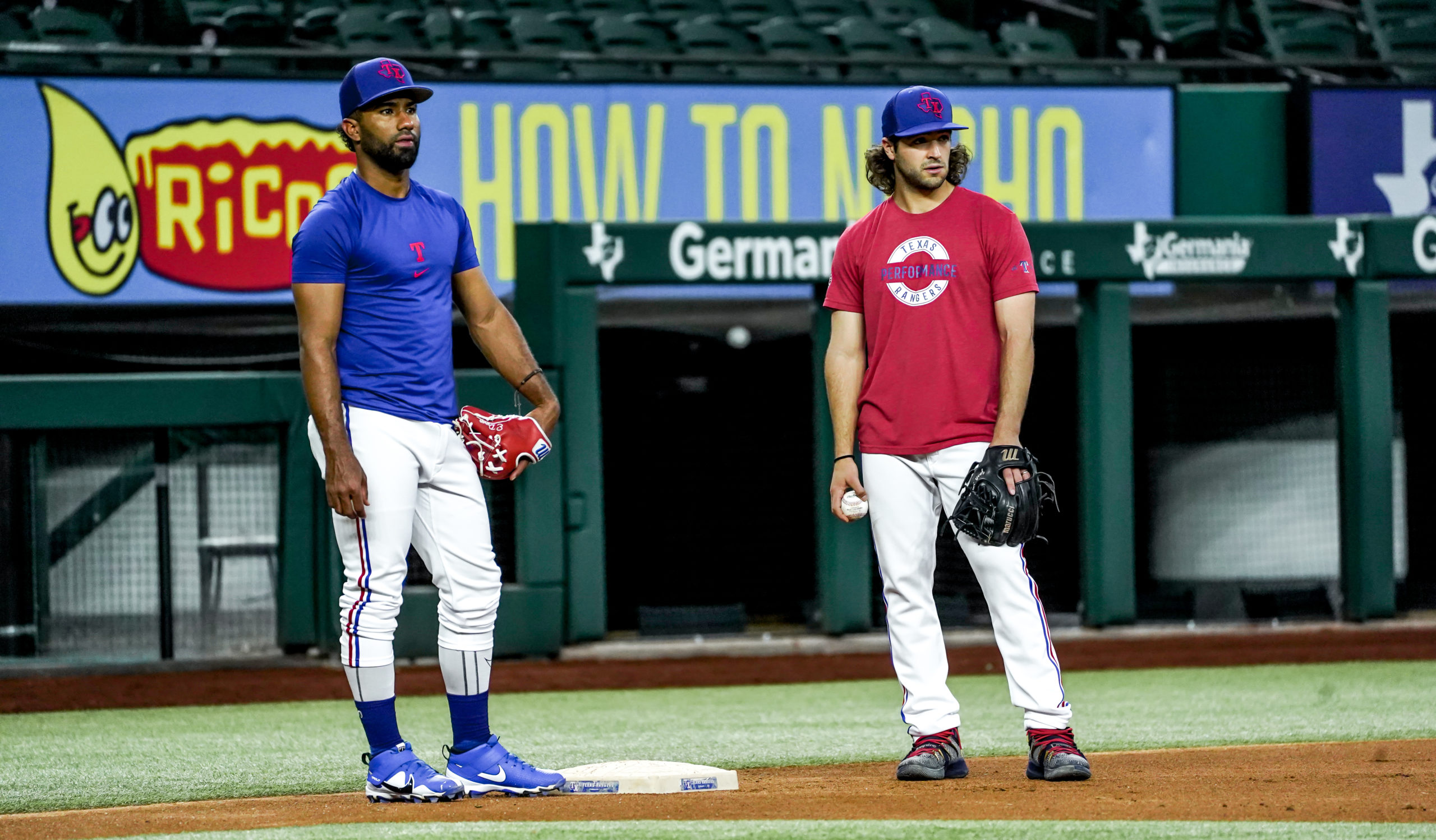 “He’s one of my best friends [and] we have conversations every day. If you ask him, he’s like a brother,” Josh Smith told me when I asked about Rangers’ Ezequiel Duran.

Duran and Smith are making their marks on the Texas Rangers in a big way and in a short period.

Unfortunately for Josh, a week into his Major League debut, he hit the injured list due to a shoulder sprain. The positive to the injury is that while he’s out, Josh says it’s helped him slow the game down, working with the Major League coaching staff, teammates, and the Rangers organization.

“[I’m] getting to watch from the bench is cool because you see what’s going on and get to try to slow the game down and see how guys are going about their day,” Josh Smith told me.

Before Smith got hurt, he reached base in every single game he played (five).

“The quality of the at-bat [Smith has], the calmness, the quality, staying in the strike zone, the path, and getting on base. He’s a pest on the bases. It’s a good fit,” Chris Woodward said about Josh Smith.

While he’s been on the injured list, Josh is getting work in center field, where he had work in the minor leagues and third base. Smith reached base ten times in seventeen plate appearances. As for who Josh leans on, there’s not one specific individual. It’s more of a collaborative effort among his teammates.

“I wouldn’t really narrow it down to one guy. Just taking advice from each of them has been really cool,” Josh said.

Now it’s another member of the Joey Gallo 2021 trade taking the Rangers by storm, Ezequiel Duran. Duran and Smith know each other well, going back to when the Yankees drafted Josh in 2019 and Zeke was a twenty-year-old.

“Me and Zeke, we played together every year starting in 2019,” Josh told me.

Josh said at first, in 2019, they stood by each other but didn’t interact as much. Fast forward three years later, and they talk every single day.

“Once we got traded together, we got close, and it’s been awesome to have him here, and then to see him come up and be successful has been really cool,” Smith said. “My wife loves him [and] he loves my wife.”

In a short time, Duran is making his mark with the Rangers.

“There are so many things that this kid does,” Chris Woodward told me.

“There’s so much he’s learned in a short period of time, and there are so many things that you can only learn here.”

Ezequiel laced a three-run triple on Thursday to win the Rangers the game in Detroit. Combine that with two go-ahead homers (while both leads didn’t hold up) and a game-saving tag hold to win the last game in Chicago, and Duran is showing that he belongs in the Major Leagues.

“The work he does at third base, the questions he asks our hitting guys, what he goes up there during the at-bat. The kid’s composure has been incredible to watch,” Woodward said.

“I’m very confident,” Duran said. “I’ve been doing well of late and enjoy going out there having fun and enjoying baseball.”

It’s also been a blast for Smith watching his good friend succeed in the Majors.

“He’s done a good job, and he didn’t play in Triple-A ball,” Smith told me. “For him to come straight from Double-A to here has been fun to watch, and he’s had a huge impact.”

The Major League journey is a dream in itself, so experiencing the journey with someone you’ve been around during your professional career can be gratifying.

“I remember when we got traded. We were like, let’s make it memorable. Even though Duran is younger than me, we talk and lean on each other. He helps me, and I help him. It’s been fun.”

They are making it memorable for themselves, the coaching staff, their teammates, and the Texas Rangers fan base.