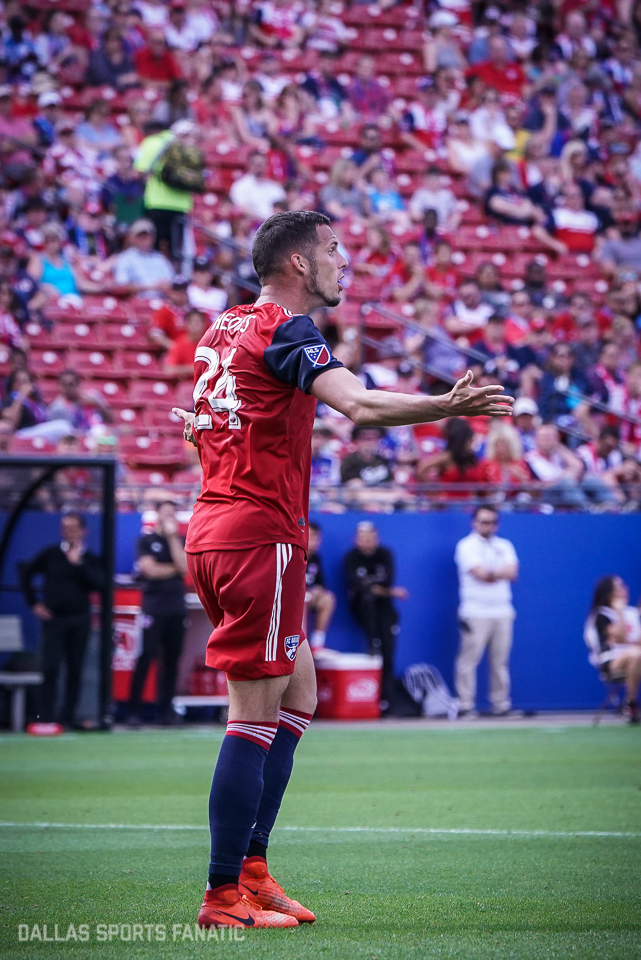 FC Dallas picked up an incredibly hard fought three points on Saturday at a packed Toyota Stadium with a 3-2 win over the LA Galaxy. We saw a great goal from Maxi Urruti and a smooth finish from Roland Lamah, both off of Mauro Diaz assists, carry FC Dallas to a 2-0 lead at halftime.

It seemed like FC Dallas was cruising on their way to an easy victory, but an early second half goal from the Galaxy’s best striker Ola Kamara swung momentum in LA’s favor. Luckily for FC Dallas, a bit of magic from the magical unicorn himself Mauro Diaz set up Roland Lamah for his second, and the team’s third to make it 3-1.

A Reto Ziegler red card followed by a late LA goal made for a ridiculously nervy ending as FC Dallas held on with everything they had to their one goal lead. You could see the relief and exhaustion from the FC Dallas players in the Texas heat as the referee blew the final whistle.

Another afternoon kickoff at home is in store for FC Dallas as they host the Vancouver Whitecaps on Saturday. Vancouver currently sit in fourth place in the Western conference one point behind FC Dallas, but with three more games played. Worth noting that Vancouver did play at home Wednesday night and drew 2-2 with San Jose, so with temperatures in the low 90’s, fatigue could definitely play a factor for the Cascadian side.

In the match against the Galaxy we saw the return to Oscar Pareja’s favorite 4-2-3-1 with Maxi Urruti up top and Kellyn Acosta getting his first start of the year. I would expect more of the same from Pareja against the Whitecaps, with the exception of likely Maynor Figueroa in place of the suspended Ziegler.

FC Dallas will be looking for more explosive offense and more Mauro magic, and hopefully three more points, before they take off on a two game road trip against Toronto FC and LA Galaxy.