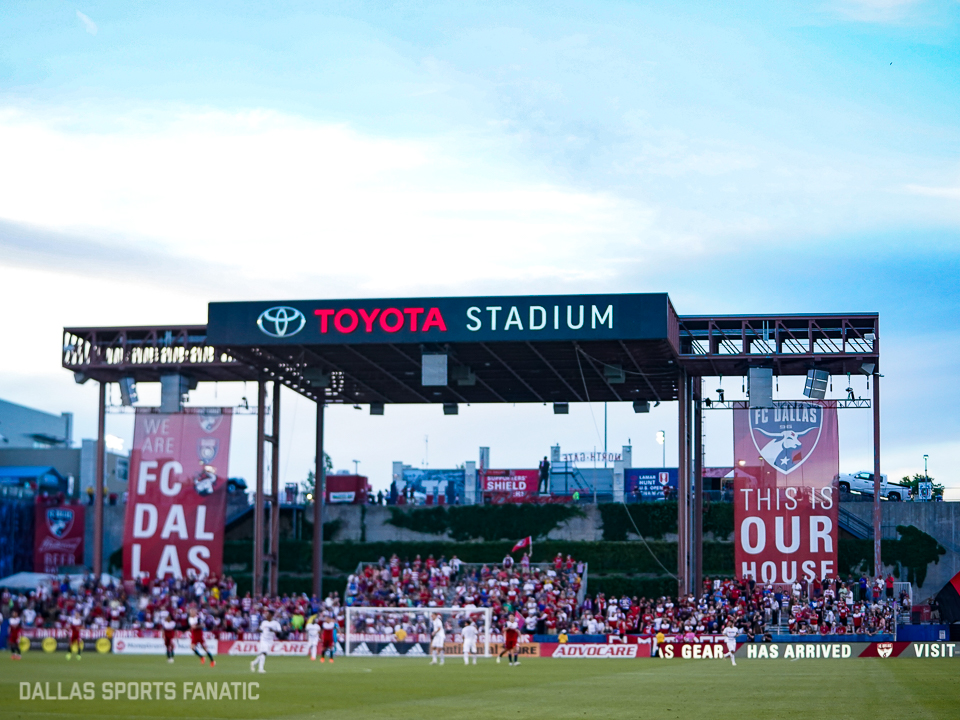 FRISCO, TX- After a three- and half-hour delay due to inclement weather, soccer kicked off at Toyota Stadium. Sunday night’s game featured a rematch from Wednesday night’s match up with plenty of outside noise.

FCD once against hosted Nashville SC in hopes of getting a better result compared to Wednesday’s loss. FCD defender Matt Hedges made his 247th regular season match for FC Dallas. Hedges, 30, equaled with former Dallas Burn player Jason Kreis for most regular-season appearances.

The game started at a much faster pace compared to their last meet. Both teams were quicker on the ball and more daring to begin on the right foot.

Head Coach Luchi Gonzalez’s lineup featured the likes of Zdenek Ondrasek, Paxton Pomykal, Michael Barrios, and Franco Jara in hopes of a more dynamic and threatening attacking force. Despite the first-half being scoreless, FCD’s efforts were threatening Nashville’s goal, but failed to see the back of the net. Paxton Pomykal and Franco Jara linked up on the edge of the box in the game’s 12th minute. Jara’s diving header effort went just wide of the near post making it FCD’s closest chance of breaking the goalless draw.

FCD seemed confused in most of their lines, as a result of that confusion and unclear game Nashville slowly increased their pace on the field. Luchi’s attacking front struggled significantly to find any goalscoring opportunities. Luchi introduced both Jesus Ferreira and Ricardo Pepi in hopes of quicker efforts to open up the scoring. FCD was uninspiring for most of the second half, tired, wrong-decision making, and only one shot on goal in the 90 minutes disputed. Luchi needs to work on the attacking front if they want to come back from Houston with the three points.

we got a point

get some rest folks pic.twitter.com/9yoHSfuqiU

FCD Head coach Luchi has some work to do. Only five out of 12 points disputed are very poor for a team that aspires to move up the chain. Decision-making in the lineup hasn’t been his forte, and it shows on the field. Hopefully, with the arrival of Andrés Ricaurte, the team could have more of an attacking threat. “He’s a creative player,” Luchi said.

“I think his strength is the last pass, assisting and finding others in space to score. He can do that in different positions – centrally, wide, underneath (the striker) and even in high positions – so I think he’s going to help out depth in the 10 (position), 7 and 11. He’s going to allow us to do some creative things.”

Following today’s result, FCD will head down south to face Houston Dynamo in the Texas Derby on Friday, August 21st. The last time these two sides met, FCD ended taking the three points. FCD will be looking to repeat the same positive result from last year’s victory. FC Dallas’ main concern while on the road against Houston is that they haven’t beaten their southern rivals since the 2016 season.

Next Wednesday, FC Dallas returns to Toyota Stadium, August 26th, when they’ll face-off against Colorado Rapids, a team they beat in their last home encounter and will be looking to repeat their victory.