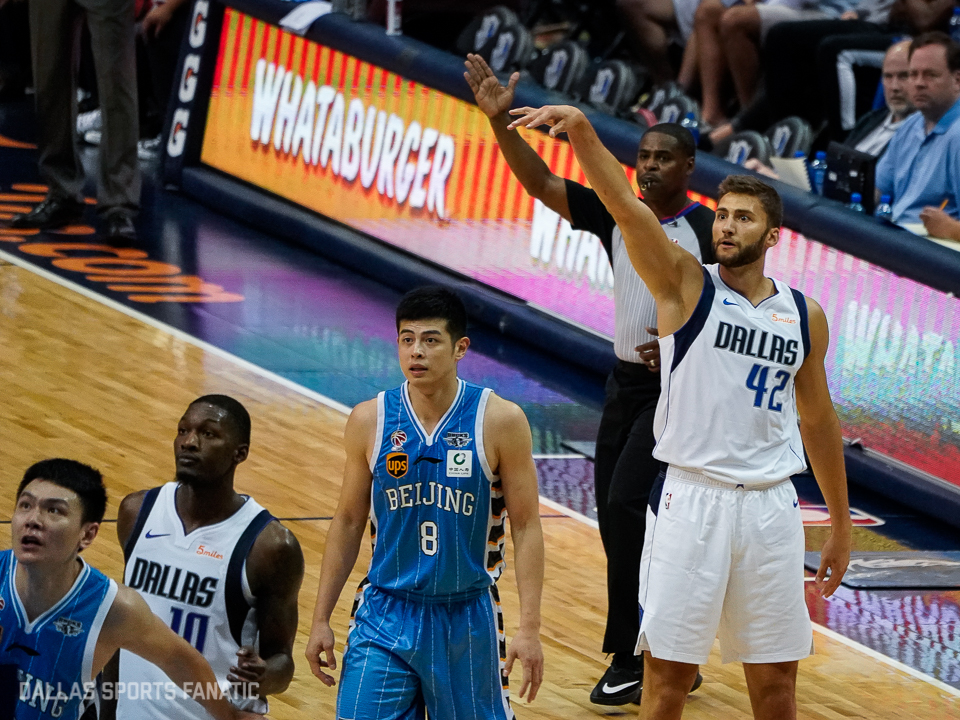 Like a tremor in The Force, the NBA regular season is so near that all true Mavs fans can feel it.

But before we close the book on the preseason and launch full steam ahead into the 82 game trek I’m calling “Dennis & Luka’s excellent adventure”, lets take one more peak back to notice five interesting statistical developments from the four preseason games.

At only 20 and 19 years old, Dennis and Luka wasted no time in sending a message to the rest of the league: “We’re here to destroy you!” Over the four games, their combined Plus/Minus was a +91 (Yowza!). They showed a commitment to get out and run and joy in finding the open man. Fears that the two may not vibe well together (“there’s only one ball”, etc) have been shown to be hollow and now the more frequent questions seem to center around “Given time, how great could they be together?” Buckle in and get your popcorn ready, its gonna be a wild ride!

Chicks and dudes alike “dig the long ball”, and the Mavs have fully embraced the NBA’s obsession with the three pointer. Last season, the Mavs were fourth in 3 pointers attempted per game at 32.8 but only 17th in 3pt accuracy. This preseason the Mavs took 35 threes per game and with any sample this small, the increase could easily be an aberration, but my question is will 3pt strokes of Dennis, Finney-Smith, Kleber, and Harrison Barnes improve enough (along with the additions of Luka and Broekhoff) to make the long ball a lethal part of the Mavs attack? We know Wes and Dirk will drill open threes, but will the rest of the team come to play? Expect the Mavs to finish higher than 17th in 3pt accuracy this season.

People with access to Mavs practices have been riding the DFS train for more than a year now, but injuries have kept it firmly in the station…until now. Now fully healthy, “Doe Doe” has been extremely solid this preseason tossing out averages of 8pts on 52% shooting and 41% from downtown, + 4.5reb all while playing his brand of steady and switchable defense. This could be a make or brake year for DFS, and in the preseason he made the best of his opportunity.

Maxi came out guns blazing this preseason as if on a mission to remind us that he flashed some serious game last season. Adding to his very solid rebounding, passing, and rim protection (ex: he blocked Joel Embiid twice in China), Maxi has been lights out from the field: 52% shooting and 50% from three. If the Maxi we saw in preseason is close to the real thing, the Mavs have found an excellent long term option offering flexibility off the bench!

Last season, the Mavs ran a dribble heavy offense with Dennis and J.J. being the key contributors/culprits. They were 19th in the league in total assists at 22.7 per game. But this year, coach Carlisle has been preaching the sermon of passing, and so far, it appears the congregation is listening. Mavs averaged 26.6 assists per game this preseason (that would have been good for fourth in the NBA last season) and the ball has been flying all over the court. With Dennis and Luka unleashed to run and gun, the Mavs’ offense projects to be as entertaining as it could be effective.

Mavs fans, the regular season curtain is about to go up and the bright lights about to shine for 82 glorious games. And here in Big D, there are good reasons to believe things are headed in the right direction!