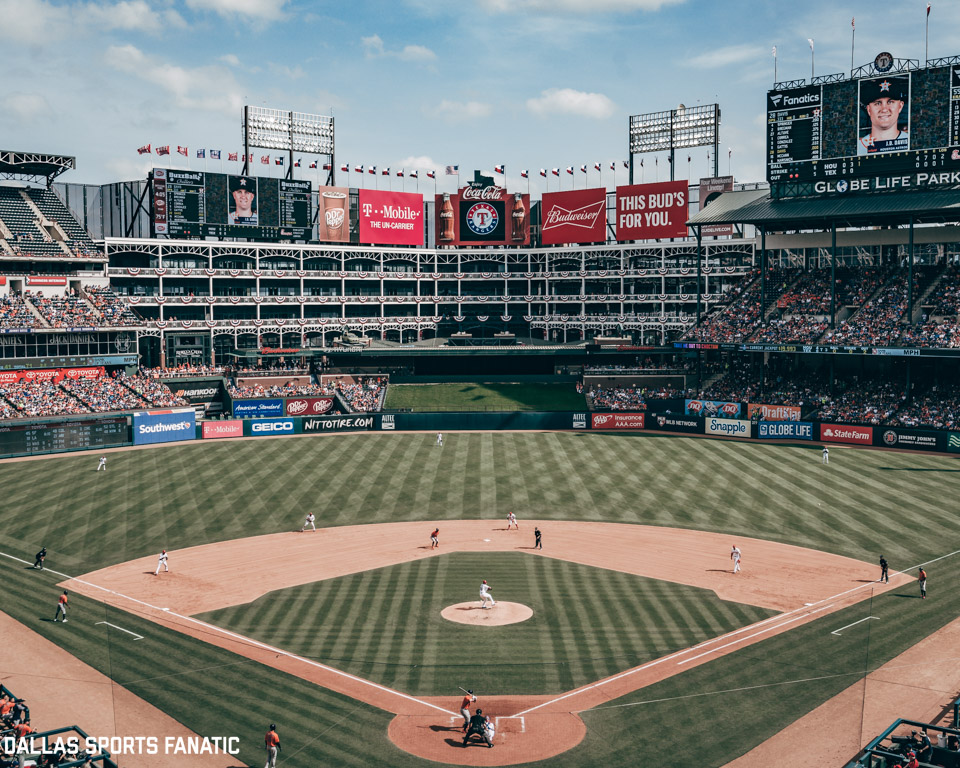 For all its greatness, Globe Life Park is not irreplaceable for the Rangers and their fans

For all its greatness, Globe Life Park is not irreplaceable for the Rangers and their fans

Luckily, I don’t think I ever had to experience old Arlington Stadium since I was like 13 months old whenever the Rangers played their last game there in 1993.  My parents weren’t the kind to take an infant to sit outside at a baseball game.  A local festival with live music?  Yes, but not to a baseball game.

Once I fell in love with baseball and practically all other sports around the age of 9 or 10, my dad began taking my brother and myself to more baseball games at The Ballpark and I loved it.  There’s something about the personality and charm of attending a baseball game in person that can’t be matched by any other sport.  This rings especially true at a Rangers game.  That particular music playlist.  The reality that, before the opening of AT&T Stadium in 2009, nothing that interesting was in view of the stadium as you approached it from the parking lot.  The fact that any trip there includes driving by “The Titan” at Six Flags.  It’s all part of the Globe Life Park charm.

When my family and I went to Colorado during the summer of 2005 or 2006, we attended a Colorado Rockies game at Coors Field in Denver as a way to please my brother and me.  My eyes were opened a bit that day.  My home ballpark isn’t perfect.  The downtown setting of Coors Field was so interesting to me.  I had just assumed that all baseball stadiums were thirty minutes away from all the tall buildings.  The fact that it could be part of a city’s downtown area blew my mind.

This was followed in the following years by visits to an underwhelming-and-under-construction Kauffman Stadium in Kansas City, a tour of the insanely beautiful Busch Stadium in St. Louis, a game at the somewhat-plain-but-interestingly-located-off-a-river Great American Ballpark in Cincinnati, and two air conditioned games at Minute Maid Park in Houston all within a few years of each other. More recently, I’ve been to T-Mobile Park in Seattle in 2014, Marlins Park in Miami in 2015, and then the nearly perfect Petco Park in San Diego in 2017.

While every stadium has its flaws, each of these places I’ve been to have made me realize that there are different things that Globe Life Park is missing.

What I’m trying to say is: I’ve seen some other ballparks and how great the modern baseball stadium can be.  While Globe Life Park is definitely somewhere I’ll miss going to once Globe Life Field opens up across the street next year, it’s not the perfect ballpark that everyone is making it out to be.  It was opened in 1994 at a time when baseball thought it needed 50,000 seat stadiums for 81 home games a year and before most of the modern amenities and technological advances today.  While GLP has since caught up with numerous renovations to its video boards and LED boards around the facades separating the first and second decks around the stadiums, it’s still behind the curve in many ways.

There are just way too many seats

Globe Life Park opened back in 1994 right around the same time as several other stadiums: Progressive Field in Cleveland(1994), Coors Field in Denver (1995), and Camden Yards in Baltimore (1992).  All of their seating capacities have proved to be a bit ambitious as the years have passed by.  All of these stadiums have undergone various renovations that have lessened their seating capacity in one way or another. 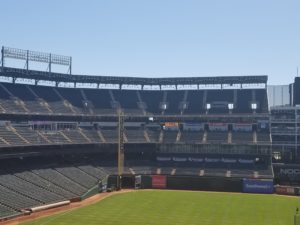 The left field stands at Globe Life Park in Arlington.

The excess seats are on display virtually every night at GLP.  As pictured above, having three tiers of stands in left field was something that just was not necessary.  Luckily, the Rangers noticed this and made sure that this wouldn’t be an issue at Globe Life Field. 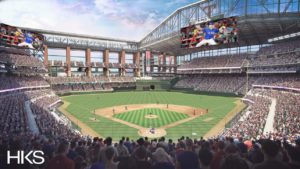 With the new stadium’s capacity being about 8,000 less than the current 48K at GLP, they took away the seats that are always empty unless it’s Opening Day or a similar big game throughout the season.  It’s awesome to have a big capacity number attached to the stadium, but how many seats are just too many for a team that has to sell 81 games worth of inventory?   Plenty of those games are just weeknights during the school year in April, May, August and September so there will just flat-out be some relatively low attendance figures regardless of how the team is performing.  Teams around baseball have made notes and adjusted accordingly when opening new stadiums.  Of the six new stadiums that have been opened around Major League Baseball since 2008 — Yankee Stadium (2009) and Citi Field (2009) in New York, SunTrust Field (2017) in Atlanta, Target Field (2010) in Minneapolis, Nationals Park (2008) in Washington, D.C. and Marlins Park (2012) in Miami — the average capacity has been just over 41,000.  That number goes below 40K (39,926) if you take out the 47,309 capacity at the new Yankee Stadium.

There are plenty of seats with a bad view

There are bad seats in every stadium.  At the American Airlines Center, there are plenty of seats in the upper deck that have an obstructed view because of glass.  At AT&T Stadium, the game is likely just a rumor as extreme heights and an easier-to-see mega videoboard occupy your view in most of the upper deck.  At Globe Life Park, there are plenty of seats that just flat-out can only see parts of the field.

I can remember sitting up in the third deck of the left field stands during the 2011 ALDS against the Tampa Bay Rays and it was one of the worst experiences I’ve ever had at Globe Life Park.  Not just because Matt Moore shut down the Ranger bats that day, but because I couldn’t see any of the left field corner by the foul pole.  A sizable portion of the field was just out of sight.  The same can be said for the right field corner from the upper deck corner down the first base line.  That’s just not good.  The Rangers seem to have realized this and removed these seats at the new ballpark.  Another notable omission from Globe Life Field?  The home-run porch in right field. 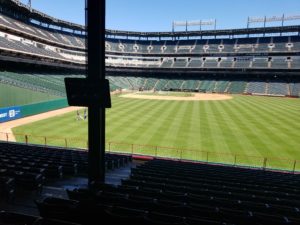 While it’s certainly the most recognizable and unique feature about Globe Life Park, it’s undoubtedly home to some of the worse seats in the stadium.  There are six pillars blocking views in the lower level (as seen above) and four in the upper deck.  Since there are no views of any of the three major scoreboards in the stadium, you’re forced to make due with the average sized TV’s hanging from the pillars.  The TV screens have definitely improved over the years, but you’re still not receiving all the info and seeing the same things as you’d see on the videoboards.

It’s just behind the curve with basic ballpark construction

One of those small things I really, really appreciate about an entertainment venue, whether for sports or music, is the ability to still be connected to the event even if you’re not in your seat.  The reality is, sometimes you have to get up!  Whether it’s to go to the bathroom or to get a snack.  For parents of young children, it’s unrealistic to expect little ones to be content sitting in one place for three hours or more.  Does that mean these people should be completely shut out from the game while they have to step away from their seat? Absolutely not.  For most fans at Globe Life Park, this is the case. 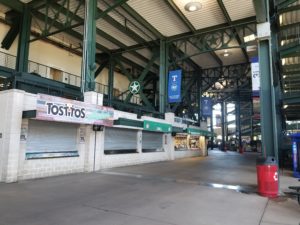 At GLP, the concessions stands block the view of the field on each of the three seating levels.  At seemingly all of the other newer stadiums I’ve been to recently, they put the concessions stands and restrooms on the back wall and allow spectators to still see a glimpse of the field and be connected to the game while they are out and about on the concourse.  We’ve all been in that scenario where you’re walking to the bathroom really quickly but then you hear a roar from the crowd and want to check out what’s going on.  It’s not always easy at Globe Life Park as you have to find an entrance to a section that’s not your own and peek past the usher.  Imagine a venue where all you have to do is walk over to behind the last row of seats in the section you’re behind and you can still see everything?  Luckily the Rangers took care of this problem when planning Globe Life Field. 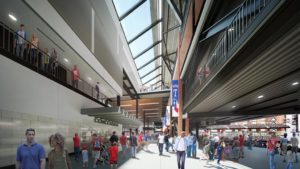 As you can see on the right side of the picture above, the field of play will be visible while walking the concourses at Globe Life Field. In an era where our attention spans are shorter than ever, this is a key factor for people attending a game.  Sometimes we’re going to get up and stretch our legs, but that doesn’t mean we should be cut off from the game.

Of course the biggest problem with the current home of the Rangers is that it lacks shade from the heat for probably about half of the fans in the stadium throughout the 60-70% of the season that the average first pitch temperature is likely between 90 and 105 degrees.  While the retractable roof at Globe Life Field will solve that issue, there were still several other key issues that needed to be addressed whenever Texas was planning a new stadium.

All Rangers fans will always hold a dear place in their heart for “The Ballpark” since it’s a beautiful baseball stadium and has been home to most of the franchise’s key moments throughout its nearly 50 years in North Texas.  However, we have to be able to acknowledge the flaws of it as well.  There are plenty of them that affect lots of fans’ ability to fully enjoy a game there.  While there will surely be an adjustment period for fans getting used to the new Globe Life Field when it opens in March of 2020, hopefully they’re able to fully embrace the improvements it will make to the baseball viewing experience for fans inside the stadium.