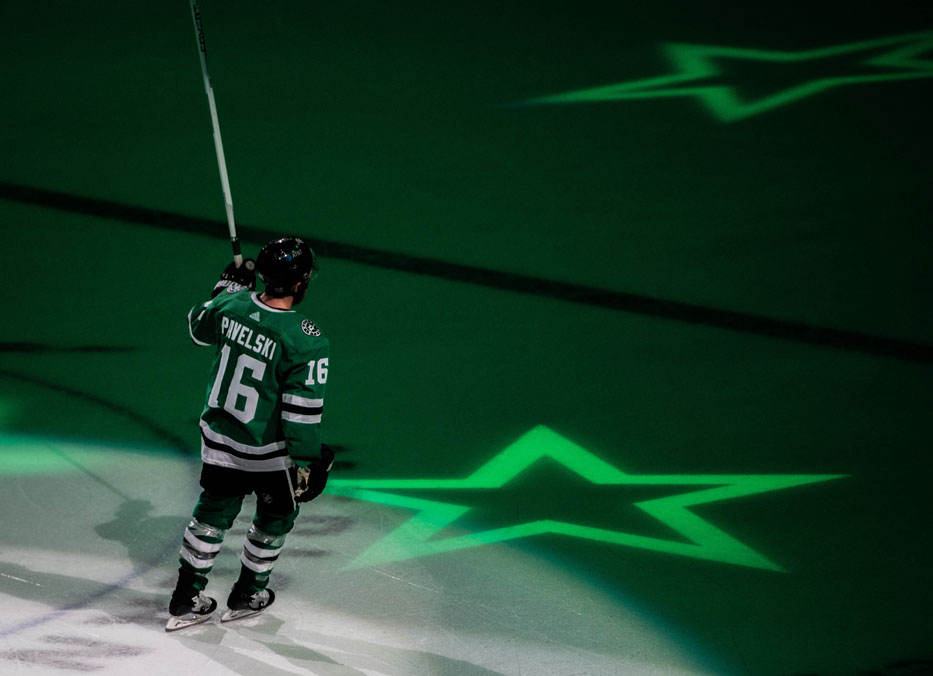 Jake Oettinger made his first start of the year against the Red Wings.  The six foot five native of Minnesota, was an alternate captain for Boston University two seasons ago and played mostly for the Texas Stars last year.

Jason Dickinson was the overtime hero on Tuesday evening, and Jamie Benn was placed on the injured reserve list.  Thomas Greiss got the nod for the Detroit Red Wings.

The Stars gained most of the offensive momentum in the first half of the period, until it came to a head, with a penalty to the Red Wings’ Mathias Brome.

While the power play did not result in a goal, it is interesting to note that the fourth line composing of Dowling, Cogliano, and L’Esperance, drew the penalty.  Rick Bowness put out his first line power play unit, but then allowed the same line that drew the penalty, to go try and score on the second unit.  This is the type of thing that really helps create team comradery, especially in a game against a team like Detroit, when it might not be the most urgent game.  These little subtleties are what really divide the good coaches and the great coaches.

Joe Pavelski then continued his offensive domination, with his fourth goal of the year, a beautiful one timer goal, after a nice pass from rookie Tanner Kero and Miro Heiskanen.  Kero looked good earlier in the shift as well, batting the puck down, and creating an opportunity.

The Red Wings power play did not look strong, as Dallas gave them chance after chance to start the period and eventually throughout the game.

Cogliano was able to bang home a rebound after the Stars continued putting strong pressure on shift after shift, to increase the lead, 2-0.

A few minutes went by, and it looked like the Stars started to get comfortable.  That was about when Valterri Filpulla was able to slap in a rebound on Oettinger.

Dallas scaled it back up, with Denis Gurianov scoring again, with 5:15 left on the board.  Anthony Mantha was trying to back check and ended up taking out his own goalie, basically clearing the net for Gury.  The play would be reviewed, but confirmed, a goal.

The period would ended 3-1.

It was just under the five minutes into the period when Miro crossed the puck over to his partner Oleksiak who would sling the puck at the net, for the team’s fourth goal of the game.  Tanner Kero would get his second assist of the game on the goal.

It was only a couple of minutes later that the Red Wings would get another goal, they did not want to go away that easily.  Four to two, Dallas.  The Stars take another bad penalty.  Detroit scored again.  And with 6:56 remaining in the third period, the score was 4-3.

Luckily for Dallas, Detroit took a penalty that killed the majority of their momentum, and Ty Dellandrea was able to get his first NHL goal on the power play, on a beautiful feed from Miro Heiskanen.

The empty net goal from Justin Dowling would solidify the Stars win, 6-3.  John Klingberg scored again to make it 7-3, because, why not?