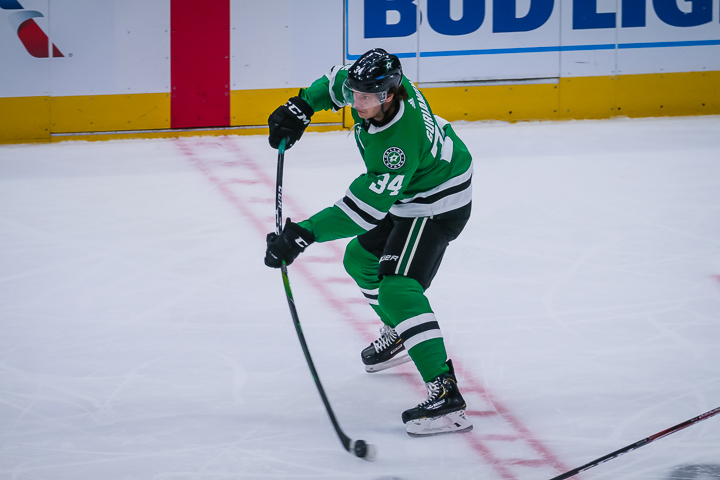 Gurianov scores four as Stars move on to the second round

Gurianov scores four as Stars move on to the second round

The Stars came into the game confident, as they had won the last two games of the series.  Matthew Tkachuk was still out of the line up, the defense led by Miro and Klingberg were firing on all cylinders, and Anton Khudobin had been playing exceptionally well.

Dallas came out flat footed, going down by three goals less than seven minutes into the game.  Rick Bowness took an opportunistic timeout to settle down his Stars team.

After out shooting Dallas 7-0, Calgary’s Milan Lucic took a penalty for shoving Jason Dickinson into Anton Khudobin.  Miro Heiskanen picked up right where he left off, blasting home a one timer past Cam Talbot on the power play.

The Stars continued to apply pressure throughout the rest of the first period, but it ended in favor of Calgary 3-1.

On the first shift of the second period, Denis Gurianov closed the goal differential to one, with his third goal of the series.  The mood of the game quickly shifted in Dallas’ favor.

Somehow, a fluttering puck bounced its way into the net just, prompting the Flames to replace Cam Talbot with Dave Rittich.  It was only the Stars’ eighth shot of the game.

While still reeling after the dramatic change of netminders, a flustered Calgary team took a delay of game penalty.  It happened to be the usual suspect, Milan Lucic, as he took his second penalty of the game, which would prove to be the second Stars’ power play goal of the game.

Dallas took their first lead of the game, after a scramble in front of the net.  The score was 4-3, Dallas.  Joe Pavelski made the lead 5-3, only minutes later.

Denis Gurianov solidified his hat trick, with a cannon over the Flames’ goalie.  His first three goals all came in the second period, as the teams went into the second overtime 6-3 in favor of Dallas.

The lone goal of the third period would be scored by Denis Gurianov.  The team’s leading goal scorer during the regular season, is starting to get back to his regular season form it would seem.

Denis Gurianov scored four goals, Pavelski had a goal and two assists, and Heiskanen registered a goal and four assists over the course of the game.  Anton Khudobin stopped the final 34 shots that he faced in the game, not allowing another Calgary goal for the rest of the game.

The Stars will move on to face the Colorado Avalanche  in the second round of the playoffs.  The Avalanche easily took care of the Arizona Coyotes in their first round.

Joe Pavelski and Denis Gurianov are tied for first in goals during these playoffs, and Miro Heiskanen is tied for first in assists.  These guys are going to need to continue playing the way they have to move on past a Colorado team that looks very strong right now.