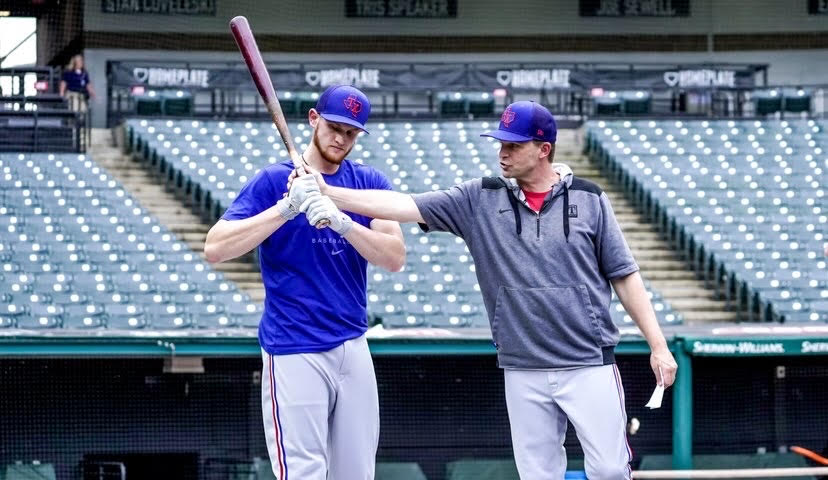 Has Sam Huff turned the corner for the Rangers?

Has Sam Huff turned the corner for the Rangers?

The season nears an end with questions about next year’s rosters and one position the Rangers are curious about is definitely catcher. Sam Huff got his feet wet in the 2020 season with 31 at-bats (10 games), but in 2022 he’s had four different stints on the big league club. The power is showing more during this timeframe, with five of his nine hits going for extra bases and hits in five of his last seven games. “He’s still tweaking his swing and getting his approach down hitting-wise,” Tony Beasley said. “We know Sam has elite power, and just get back to the Sam that he was that we saw two years ago. He hit for a lot of power to all fields.” Huff is lowering his pull percentage in September compared to the previous months in addition to squaring up more baseball resulting in harder contact.

From the catchers’ side, there have also been improvements regarding blocking in the past few weeks. “He’s been fine back there,” Beasley told me. “He throws well [and] when we give him a chance to throw a guy out, we can do it.” The key is when the Rangers pitchers give Sam a chance. “We haven’t been the quickest team to the plate as far as keeping runners from stealing bases,” Beasley reiterated. This season, Huff has thrown out four of twenty-six runners trying to steal. Eleven of the twenty-two came on two specific games (June 7th at Cleveland and September 6th at Houston). Two of the four runners caught are in September. The Rangers allowed the second most stolen bases in MLB (tied with Boston) with twenty-seven runners caught (ranked in the middle in MLB). It’s an aspect that coaches are pointing more towards the pitching staff rather than Jonah Heim, Sam, Meibrys Viloria, Mitch Garver, and Kevin Plawecki.

Blocking for Sam is still a work in progress. The five passed balls tie him ninth overall in baseball with 270 innings fewer than anyone else in the top thirteen and thirty starts fewer. “We went through a period of picking [and] trying to get back to more of conventional blocking, so [Huff] has been working on that. Sam is still a work in progress, but he works hard every day. He’s committed to the process of getting better [and] we got to continue to let him play and adjust at this level,” Tony Beasley said.

As for working with the pitching staff, the Rangers pitchers have been good the past few weeks, averaging allowing under four runs a game. Glenn Otto, who Huff caught in his last five starts, posted a 4.32 ERA with five walks and twenty strikeouts. “It’s been cool to be able to catch his starts [and] kind of get to Glenn a little more about himself as pitcher, but also off the field [and] get to build that relationship,” Sam Huff said. For Sam, he said it’s a coincidence. “[Kevin and Jonah], they’re awesome at what they do, and we all bounce ideas off each other. I pick their brains more, and that’s where I talk to them, Bobby, Doug, Sags, and everyone on the organization trying to figure out what we need to do as a group.”

Remember that last season Sam Huff played sixty games and 225 at-bats all year (at all levels) due to knee surgery. He didn’t get back to catching in a game until this year. Therefore, much of it is returning to where he was before 2021. Since September 7th, Huff has allowed one passed ball, three stolen bases, and thrown out two. Take the five wild pitches with a grain of salt, depending on the degree of difficulty blocking those. 2022 is about taking that next step of development for Sam Huff and asking what his takeaway is for this season. “Just try and grow as much as possible,” Huff responded. I think picking everyone’s brain [and] pitching coaches too. [Also] what I need to do as a pay to win. It’s what I want to take from and then help every day now and into the future.”

With a healthy Mitch Garver, the Rangers have stiff competition for the backup catcher role. For Sam Huff, the past few weeks are a good indication of what the Rangers hope for in his development. He’s showcasing the power, the arm strength, and is working well with the young pitchers. The Rangers continue a string of excellent catching depth in the organization.