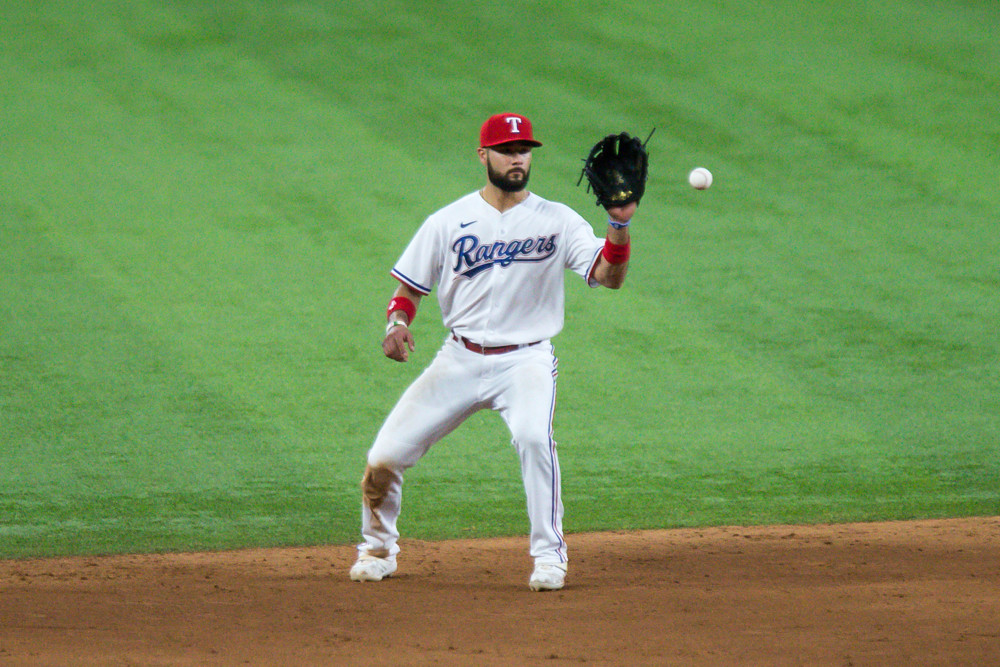 When you look at the Rangers roster, it’s easy to determine that Isiah Kiner-Falefa is one of the more tenured guys on the team. But even he is experiencing an entire 162 game season for the first time in his career. At 126 total games played, IKF is sixteen games over his career-high in his rookie 2018 season. 2021 provided 150 more at-bats than that season and counting, and just like everyone else, it’s a learning experience.

Isiah Kiner-Falefa’s August is on pace to challenge May as the best month of his big league career (he started the month 2 for 12). So what’s the secret to success? Consistency, says Isiah. “Sticking with an approach, do my homework [and] being in the moment.” Also, he attributes to appreciate the ability to go out and play the game he loves every day. Rangers skipper Chris Woodward describes it with the two “G” s, Grit and Grind. “This kid never gives in,” Woodward said. “Always trying to improve, asking questions, thinks about things too much at times which is a good fault to have.”

If you notice, a lot of contact Isiah made over the past few weeks has been ground balls, but most importantly, line drives. “From a technical standpoint, staying in his legs, his lower half has been a lot better, and staying in the strike zone,” Woodward said. Eight of fourteen balls put in play from Isiah in the Cleveland series went the opposite way and stayed in the zone. “He has adjustability. He gets on the fastball. He hits the ball from line to line, so it’s hard to position against them,” Chris Woodward said. In 2021, Isiah has lowered his soft contact percentage to 14.6% and averaging his highest barrel percentage of his career (2.3%)

I’ve gone on and discussed Isiah Kiner-Falefa’s defense and he  continues to showcase why he won a gold glove last season. In his first entire season as a shortstop (and his first real season there consistently since 2014), Isiah is third in MLB in defensive runs saved (15) and first among shortstops. “He doesn’t take a day off,” Woodward told me. “He doesn’t take a pitch off on defense, and that’s what separates him from a lot of other major leaguers.” Even at tops in the majors, Kiner-Falefa continues to try to improve to become not just a good shortstop but a well-rounded top-of-the-league shortstop. 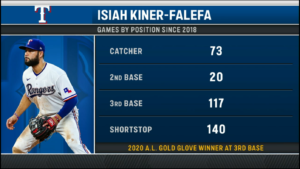 “A lot of people don’t realize how good he is or what he did last year,” is a statement made during Tuesday’s Rangers vs. Indians game on Bally Sports Great Lakes. It’s a truthful statement. The next day, the broadcast highlighted Kiner-Falefa on how he flies under the radar. On the day, the broadcast noted that IKF and their shortstop, Ahmed Rosario, are two of the more underappreciated guys in the league. Proving to the world who Isiah is as a player was a mindset that he had early in the season, but now, he’s shifted his focus from that narrative. “I think that’s what got me into a little bit of a funk trying too hard, trying to prove people wrong. Then I realized I had an opportunity to prove that guys like me belong in the big leagues,” Kiner-Falefa told me.

How does Isiah classify guys like him? Well, it’s looked at similar to the Angels’ David Fletcher (Isiah used this comparison). These guys have a high contact rate, play exceptional defense, and put the ball in play. In addition, players that wreak havoc on the bases and move runners over in their at-bats, a phenomenon somewhat lost looking a league filled with power hitters that aim for one goal to hit the ball out of the park. “I just want to bring that aspect of the game back, which I feel like we’re getting away from,”

The outside world looked at Isiah Kiner-Falefa as a catcher converted to an infielder. While that’s not the case, Isiah understands the connection of his Major League career position-wise, and nowadays, it doesn’t matter to him. “The way I look at it is if we had a World Baseball Classic team or Olympic that we could all play in, I would be the utility player with catching to make the team,” Kiner-Falefa told me. 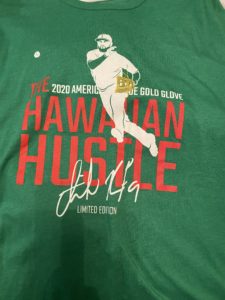